Home » Reviews » The Paris Architect and The Fallen Architect

The Paris Architect and The Fallen Architect 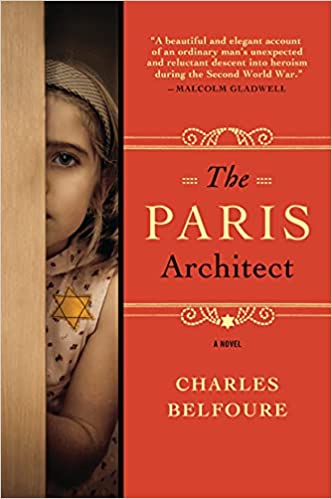 Paris and Fallen Architects – Two novels, one author, an architect by training, a novelist by inclination.

An architect by training and a novelist by inclination, Charles Belfoure has written two narratives that feature protagonists who are architects. His first was The Paris Architect, which takes place during the German occupation of Paris in 1942. Later he wrote The Fallen Architect, which occurs in England at the beginning of the twentieth century. Both are filled with insider knowledge about the artistry and craft of architecture and about the sorts of men who choose such a career.

The Paris architect, struggling to earn a living in a time of war, finds himself caught between two sides. A wealthy aristocrat hires Lucien Bernard to build secret hiding places for Jews fleeing from the Gestapo. Basing his plot on the Elizabethan “priest holes,” when architects concocted camouflaged spots where priests could hide from their oppressors, Belfoure imagines doing the same inside Paris mansions. Bernard visits one elegant residence after another, designing spaces inside statues, under staircases, behind fireplaces, where refuges might secrete themselves. At the same time, he begins to rebuild his practice by “collaborating” with the Germans, designing munitions factories for the “enemy.” Needless to say, his dual roles conflict with one another, and that tension drives the plot of The Paris Architect. 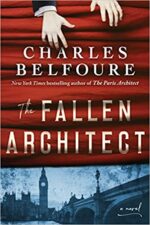 A different sort of double life troubles Douglas Layton. The Fallen Architect begins with Layton’s release from prison. Convicted of murder, he spent five years in custody because one of his designs had mysteriously failed, killing fourteen patrons jammed beneath the balcony of a fully packed music hall. Desperate to prove his innocence, Layton changes his name, his appearance, and his profession. He returns to London, not as an architect but as a music hall workman who paints the multiple backdrops used by music hall acts. This gives him access to an insider’s point of view, so he can spend most of Belfoure’s novel trying to determine what went wrong on the fateful night at the Britannia Empire Theatre. Not only does Layton explore the mechanical aspects of the disaster, he also probes the enmities and alibis of those who might have been responsible.

I enjoyed both of Belfoure’s architect novels, but for two distinct reasons I preferred Fallen to Paris. One has to do with subject matter. I have never shied away from novels about war, but given the recent headlines about authoritarianism I found myself cringing at the Parisian Gestapo tactics. Suddenly that mid-twentieth century persecution didn’t feel like a historic arm’s length away. And that made me uncomfortable. On a lighter note, I love mysteries. There was nothing mysterious about Paris, while much to my delight, Fallen pursued clues right and left. The casuistry was credible, the possibilities and red herrings, infinite.

The second reason I preferred Fallen has to do with the author. In his notes at the end of that novel, Belfoure answers a question: “How has your writing evolved from your first book to now?” Succinctly he replies, “I think I’m better at character development.” Yes, indeed. Lucien Bernard seemed stiff to me. I was interested in the events surrounding him and the choices he made, but I never felt invested in him personally. As I turned the pages, I wished him well. Period. In contrast, I wanted Douglas Layton to succeed, to find the person responsible for the tragic music hall deaths, to relish a new career, to reunite with his estranged father and his absent son, to fall in love again. He was flesh and blood, with passions and desires and even obsessions, all drawn in depth by an author who knew his character’s personality far better than he understood the motivations of Lucien Bernard.

In sum, I recommend both of Charles Belfoure’s architect novels. If you have to choose one, however, I’d pick The Fallen Architect. – Ann Ronald

Also available by Charles Belfoure: Niernsee and Neilson (and Randolph Chalfant); Architects of Baltimore; House of Thieves; The Faberge Secret; The Baltimore Rowhouse; Monuments to Money; Dying by Design. 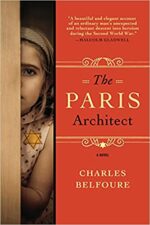 Ann Ronald is a retired English professor from the University of Nevada, Reno. Author of dozens of reviews, she’s also written a number of books about the American West. They include literary studies such as The New West of Edward Abby and Reader of the Purple Sage, cultural studies such as GhostWest and Oh, Give Me a Home, and nature writing such as Earthtones: A Nevada Album. Her latest is a work of fiction, Friendly Fallout 1953. Since retiring, she’s been reading vociferously, so “Bookin’ With Sunny” is giving her a wonderful opportunity to share thoughts about her favorite new discoveries.
More from this reviewer
PrevAnimal Bodies
Spy of the First PersonNext