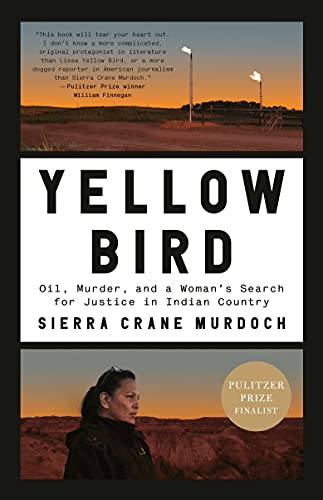 Regarding Sierra Crane Murdoch’s Yellow Bird, I’m tempted to lament: “too much information!!!” But that’s the point. Yellow Bird does a deep dive into every conceivable aspect of twenty-first-century Mandan, Hidatsa, and Arikara Nation life after the Bakken oil fracking boom irrevocably altered the North Dakota reservation. Ostensibly a “Search for Justice in Indian Country,” as the subtitle notes, free-lance journalist Murdoch expands the reach of her investigation. She includes multiple chapters about oil exploration and extraction, about colonial exploitation of the Fort Berthold residents throughout history and especially in modern times. She also looks at the particulars of family intimacies, and most especially at the toll taken on individuals and their loved ones by riches, poverty, and circumstance.

The full subtitle of Yellow Bird is “Oil, Murder, and a Woman’s Search for Justice in Indian Country.” This denotes the provenance of Murdoch’s prose. A trucker disappears. An Indian woman with an addictive personality becomes obsessed with finding out what happened to him, where and why. Lissa Yellow Bird befriends the man’s mother, amasses boxes full of police reports and related materials, combs the reservation for his body and his story, pesters the authorities, even posts flyers pinpointing those she thinks are responsible for KC’s supposed murder.

Yellow Bird herself is an enigmatic main character. Lissa’s checkered past includes five children fathered by five different men, a history of excessive alcohol and methamphetamine usage, countless failed recovery programs, and a prison record for dealing drugs. At the time of her search for KC’s killer, however, she is clean and sober, taking care of her younger children and holding down a decent job. But because her personality fixates on things, she needs an outlet for her energies. And that outlet is KC, a man she never met, a man who symbolizes the multiple conundrums of the North Dakota oil industry.

Yellow Bird’s personal circumstances and those of various family members give Murdoch an opportunity to explore the intimacies of contemporary Indian reservation life. I have read a lot of accounts describing the plights of natives forced onto such enclaves, but I don’t think I’ve ever read anything as broad and as deep as Murdoch’s investigations go. Lissa’s mother and grandmother, her father and uncles, her children and their insecurities, her own inability to find a suitable or stable man. At one point, in fact, she and Murdoch both suggest that Lissa’s KC investigation acts as a substitute for Yellow Bird’s inability to function in what we might call “normal” ways. A super bright woman, she needs purpose for her energies. KC provides that rationale. At the same time, Murdoch provides a multi-faceted portrait of Lissa Yellow Bird that makes the reader dismiss the woman’s foibles and applaud her successes. When Murdoch expands her interest in searching for missing persons to include women who have vanished, too, she earns recognition for spotlighting a major problem in Indian Country today.

One further aspect of Yellow Bird is worth noting. Sierra Crane Murdoch writes a very perceptive “Author’s Note” summarizing her investigations, her sources, and her own role as one of the players in her book. Murdoch notes the uneasiness she felt as a white woman writing about women of color, wondering how she might do justice to the complexities of Fort Berthold and Lissa’s MHA Nation life. That’s why Murdoch chose to tell Yellow Bird’s story through her journalistic eyes, as she was seeing and hearing Yellow Bird’s actions and voice, as she was interpreting the actions and voices of others. This narrative decision, I think, makes Yellow Bird all the more powerful, one of the most astute books I’ve read about the complexities of Native experiences. –  Ann Ronald 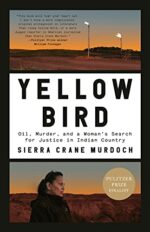 Ann Ronald is a retired English professor from the University of Nevada, Reno. Author of dozens of reviews, she’s also written a number of books about the American West. They include literary studies such as The New West of Edward Abby and Reader of the Purple Sage, cultural studies such as GhostWest and Oh, Give Me a Home, and nature writing such as Earthtones: A Nevada Album. Her latest is a work of fiction, Friendly Fallout 1953. Since retiring, she’s been reading vociferously, so “Bookin’ With Sunny” is giving her a wonderful opportunity to share thoughts about her favorite new discoveries.
More from this reviewer
PrevSpy of the First Person
Children of the LandNext