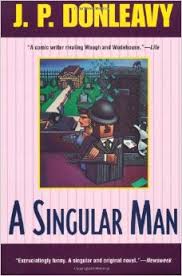 JP Donleavy once described himself as a comfortably burned out volcano. A Singular Man was written when the volcano was still spitting fire and lava. It’s the story of George Smith – incredibly wealthy, incredibly lonely, and incredibly snake-bitten. George is obsessed with two things: death and the alluring Miss Sally Thompson, sans the horse of a dog she calls her pet.

Donleavy’s unconventional use of language and punctuation – sentence fragments and run-ons, the shifting from fist person to third – the omission of question marks and so on – may take some getting used to, but it serves to bring us deeper into his world, a world where even the most familiar things are strangely mutated. Hunter S. Thompson had this to say about A Singular Man…[It’s] “like sitting down to an evening of good whiskey and mad laughter in a rare conversation somewhere on the edge of reality.”

George Smith is rich. Just how rich is never revealed, but it’s implied that he is as wealthy as they come, wealthy enough to withdraw an enormous amount of cash and rain it down on the public from atop one of his tall buildings. And we’re allowed into the character’s head, access Donleavy is apt to provide…

“Here on this little bench. You left me wretched Sally Thompson. You left me sad. Last night on Her Majesty’s balcony couldn’t you see me wave. In the light breeze weeping. Her Majesty sleeping. Laughed lightly letting treasury notes slip out from fingers. Down over the city, separating in the dark. Fell so silently. Without pomp in the crazy circumstance. I thought let urine be followed by gold.
Just
For
A
Change.”

Other available books by Donleavy: The Beastly Beatitudes of Balthazar B; The Lady Who Liked Clean Restrooms; The Destinies of Darcy Dancer, Gentleman; A Fairy Tale of New York; History of the Ginger Man; The Onion Eaters; The Unexpurgated Code; J. P. Donleavy’s Ireland; A Singular Country; Leila: Further in the Life and Destinies of Darcy Dancer, Gentleman; De Alfonce Tennis; Are You Listening Rabbi Low; Wrong Information is Being Given Out at Princeton; Schultz; The Saddest Summer of Samuel S.; The Ginger Man. 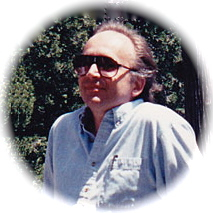 From the country comforts of rural Wisconsin, David's family, seeking even greener pastures, moved west during the “second gold rush” - the California building boom. We all know how that turned out. Barely escaping high school, David spent his final teen years and early adulthood singing and playing music. By ear. And by the seat of his pants. Soon after, it was writing, fiction and poetry being published in various obscure lit mags, screenplays placing in Hollywood contests and being optioned by independent production companies bent of taking big chances. Then there was the coupon copy in countless automotive service and parts mailers. Today, David reads, watches movies, plays seven-card stud and does token workouts in the gym at the Senior Center, Renton, Washington.
More from this reviewer
PrevPlenty of Time When We Get Home
Under the Wide and Starry SkyNext