Home » Reviews » History » Plenty of Time When We Get Home

Plenty of Time When We Get Home 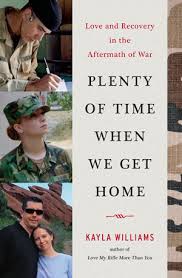 Plenty of Time When We Get Home: Love and Recovery in the Aftermath of War

War and peace. Williams’s initial memoir, Love My Rifle More than You, explores what it’s like to be an enlisted female soldier in the U.S. Army while at war in Iraq. War. Plenty of Time When We Get Home explores returning to America and trying to adjust. Peace. The challenges Williams has to navigate are direct as well as existential. Most fall under the cliché: some wounds don’t bleed.

Back in the U.S.A., she establishes a romantic relationship and eventually marries Brian, a soldier she met in Iraq, a soldier wounded there by an Improvised Explosive Device (IED) and who suffered a Traumatic Brain Injury (TBI). First, she tries to help him navigate what the two of them perceive to be the Army’s impenetrable medical bureaucracy and then, after he leaves the Army, the V.A.’s equally unhelpful “system.” Williams decides to leave the Army at the end of her five-year hitch. She goes to graduate school. She tries to make sense of her Post Traumatic Stress Disorder (PTSD), her excessive drinking, her fears, her OCD. She gets a job using her Arabic language skills and her background in Army intelligence. Their marriage is in tatters, a consequence of their individual as well as combined relational disabilities. He has his own list of challenges: depression, alcoholism, suspected loss of several dozen IQ points. He has PTSD in the extreme. Slowly, each makes subtle shifts in attitude and behavior. Slowly, more than five years later, they begin to emerge from the darkness.

Aha, the perceptive reader says. This is just another victim to victory anthem. The arc of the memoir’s narrative is clearly a rising one, even if it takes a long time to become apparent. But, Kayla Williams is not a victim. She is dealt some bad cards from time-to-time, but she does not react with an iota of self-pity. Instead, her reactions go beyond mere reactivity, maybe not immediately, but eventually. Her reactions are astonishingly complex. Faced with an array of barriers—personal, relational, medical, professional—she demonstrates to us the nuances of her coping and balancing skills. She improves them as she proceeds, but at their center are two kernels. First, a fierce commitment to be committed, framed by her sense of personal responsibility. She won’t be a victim and doesn’t see anyone else as one either. Second, she has an equally fierce determination to effect social change. In her case, the social change she pursues has to do with veterans’ issues—the VA, Congress, America’s war amnesia, education, support groups, and employment to name a few. Before the 2008 election, she and her husband draw up a list of pros and cons for Obama and McCain with respect to their stated commitments and actions concerning Veterans’ issues. The decision they come to will affect their lives dramatically, particularly hers.

Making the transition from war to peace has never been an easy one. It took ten years of grief, courage, and wiliness for Odysseus to return home to Ithaca. E.B. Sledge in With the Old Breed (a top five war memoir) required thirty-five years before he could stare down his World War II Cyclops. Williams is quicker. She is helped by the growing military, social and medical awareness of PTSD since it was first entered into the DSM (Diagnostic and Statistical Manual) in 1964, just before the Vietnam War went from simmer to boil. Here again, however, Williams demonstrates the complexity of her awareness and responses. She is careful not to ascribe all of her physical and existential problems to PTSD. It is a necessary but insufficient category. There are other causes: her need to be in control, her being female, her spouse, her desire to be in love, her intelligence, her determination to make a difference in the world, and her desire to have a child. As she demonstrates in Plenty of Time When We Get Home, she is a woman committed to living life in 3-D.        – Neal Ferguson

Also available by Kayla Williams: Love My Rifle More than You.

Neal Ferguson is a self described Anglo-phile. After studying for a PhD in British history and doing research for a year in various British archives, he came to the University of Nevada in 1970 to teach. Soon he found himself in administration where he remained until 2003. After returning to full-time teaching a decade ago, he decided to concentrate his teaching energies on Medieval British history and various global aspects of World War II. Dedicated to Ambrose Bierce’s proclamation that the purpose of war is to teach Americans geography, Neal insists that his students accompany him (in class) to sundry east European rivers and steppes, African deserts and jungles, south-east Asian mountain ranges and peninsulas, and small islands and coral reefs in the Pacific. Currently he is writing a book about the ups and downs of General Douglas MacArthur’s military reputation.
More from this reviewer
PrevThe Thirteenth Tale
A Singular ManNext