Home » Reviews » Biography » Under the Wide and Starry Sky

Under the Wide and Starry Sky 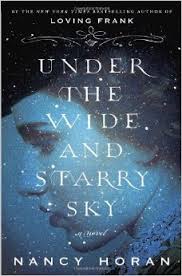 “Did all women married to well-known men struggle for recognition?” So Robert Louis Stevenson muses in Under the Wide and Starry Sky, Nancy Horan’s new novel about the author’s wife, Fanny Van de Grift Stevenson, and their life together. Last year I reviewed Horan’s first novel, Loving Frank, where she told the story of Mamah Borthwick Cheney’s love for Frank Lloyd Wright. Now she has written a similar book, fictionalizing another woman’s experiences after she falls in love with a single-minded, driven, creative spirit whose artistry consumes him.

Fanny and Lou (as his friends called Robert Louis Stevenson) were an unlikely pair. An American, she was ten years older than the Scotsman. Moreover, Fanny was already married and a mother, although she was estranged from her husband and living in Europe. Lou was a young writer, ambitious but suffering from a lung disease that regularly left him debilitated. Throughout their marriage, in fact, he was often ill and often bedridden.

The first part of Under the Wide and Starry Sky follows their courtship, Fanny’s eventual divorce, and her subsequent marriage to her beloved Lou. Next comes a series of steps forward, followed by innumerable setbacks. Given Lou’s health, the Stevensons lead a nomadic life, moving constantly in search of a place where his lungs might heal and his health might prosper. At the same time, he is seeking success as a writer. He tries poetry, novels, travel narratives, even plays and collaborations. Some of his creative efforts, like Treasure Island and Dr. Jekyll and Mr. Hyde, are wildly popular, while others are soon forgotten.

In the third section of Under the Wide and Starry Sky, the two tour the South Pacific and make their home in Samoa. There, supposedly in paradise, they endure more difficulties. Building a house, they overspend. Lou’s new narratives are not as well received as his earlier writings. And, most problematic of all, Fanny suffers from a serious breakdown. Her increasingly strange behavior gives way to outright madness for a time. Sitting by her bedside, Lou wonders if his own single-mindedness has contributed to her illness. “Did all women married to well-known men struggle for recognition?” he wonders. Indeed, this precise question is at the heart of all Horan’s fiction. How does a woman cope?

Like Loving Frank, this novel is a catalogue of the ups and downs of love between two strong-willed people who adore each other. If anything, Horan’s compendium may be too thorough. Under the Wide and Starry Sky is a long biographical novel, and it includes many, many domestic details. Horan might have shaped her research a bit more, might have made less of the Stevensons’ everyday lives and more of the dramatic incidents. That said, however, I appreciate what she has accomplished. Horan writes extremely well. In this very readable book, one meets other well-known authors and tours unknown corners of the world, characters and scenes all sketched vividly and imaginatively.

Even the title of Horan’s novel is creative. It comes from one of Robert Louis Stevenson’s best known poems.

Under the wide and starry sky,
Dig the grave and let me lie.
Glad did I live and gladly die,
And I laid me down with a will.

This be the verse you grave for me:
Here he lies where he longed to be;
Home is the sailor, home from the sea,
And the hunter home from the hill.

Fanny and Lou now lie buried in distant Samoa, atop Mount Vaea, together “under the wide and starry sky.” – Ann Ronald

Ann Ronald is a retired English professor from the University of Nevada, Reno. Author of dozens of reviews, she’s also written a number of books about the American West. They include literary studies such as The New West of Edward Abby and Reader of the Purple Sage, cultural studies such as GhostWest and Oh, Give Me a Home, and nature writing such as Earthtones: A Nevada Album. Her latest is a work of fiction, Friendly Fallout 1953. Since retiring, she’s been reading vociferously, so “Bookin’ With Sunny” is giving her a wonderful opportunity to share thoughts about her favorite new discoveries.
More from this reviewer
PrevA Singular Man
Love My RifleNext