Home » Reviews » Salt to the Sea

Salt to the Sea 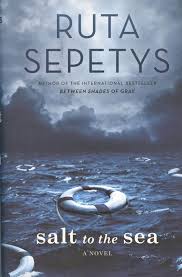 Ruta Sepetys’ latest novel, Salt to the Sea, returns to the topic of World War II, but it is not about any famous battles or generals. It is about civilians: Poles, Lithuanians, Latvians, Germans, Jews, and other Baltic nationals fleeing for their lives as a bent-on-revenge Soviet Army approaches from the east and a desperate no-holds-barred German Army from the west. Sepetys writes of the sad and inevitable terror of those left to face either the victorious and bloodthirsty Soviets or the desperate German army now conscripting even children to fight to the bitter end.

The refugees attempted to walk from whatever war-torn city or village they came from to the Baltic port of Gotenhaven, where they had been told that retrofitted German ships were waiting to transport to safety those fleeing, both wounded soldiers and refugees. They came by the thousands, hoping their papers, forged and real, would gain them access to what they believed was their only means of survival. This is the story of what happened aboard the Wilheim Gustloff.

Sepetys is a master at drawing the reader into stories, broad in their scope, but intimate in their telling, by characters who move and are moved by the events within the tale. Salt to the Sea is fiction, brought to life through the characters of Joana, a young Lithuania woman now fleeing Germany, Florian, a German youth of mystery, Emilia, a Polish teenager, and Alfred, a young German soldier, a sociopath who mentally creates and lives in a world based on Mein Kampf. These characters are the only fiction in a true story about what happened to those thousands of men, women and children.

Salt to the Sea is a cross-over novel, a book to be appreciated by both youth and adults. Based on Sepetys’ previous books, Between Shades of Gray and Out of the Easy, I turned off my phone, never went near my computer before finishing the book, and gave up an entire day to read. I am still shaking my head. How could we not have heard of this tragic event before now? That the author could skillfully create so few characters to convincingly represent thousands is a stroke of genius, and based on her Author’s Notes and Acknowledgments, Sepetys’ research of these events is formidable.

Now seventy-one years later, through global media news coverage, we see again thousands of men, women, and children, fleeing their war-torn homes for their lives, putting themselves in the hands of the makers of promises that cannot be kept. Sepetys’ novel gives us not a nudge, but a push to look into the faces of these modern-day refugees, those who make it safely to foreign shores and those, who like so many aboard the Wilheim Gustloff, do not. Sepetys has given voice to those whose voices are no longer heard and a hauntingly beautiful life to their stories. “Salt to the Sea” should find a wide and devoted readership. – Sunny Solomon

Also available by Ruta Sepetys: Between Shades of Gray; Out of the Easy. 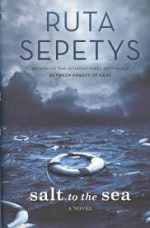 Sunny Solomon holds an MA in English/Creative Writing, San Francisco State University. She is a book reviewer for “The Clayton Pioneer” and her poetry and other writing has been published in literary journals, one chapbook, In the Company of Hope and the collection, Six Poets Sixty-six Poems. She was the happy manager of Bonanza Books, Clayton, CA and Clayton Books, Clayton, CA. She continues to moderate a thriving book club that survived the closure of the store from which it began. Sunny currently lives next to the Truckee in Reno, NV.
More from this reviewer
PrevWhite Trash
The Last Painting of Sara de VosNext