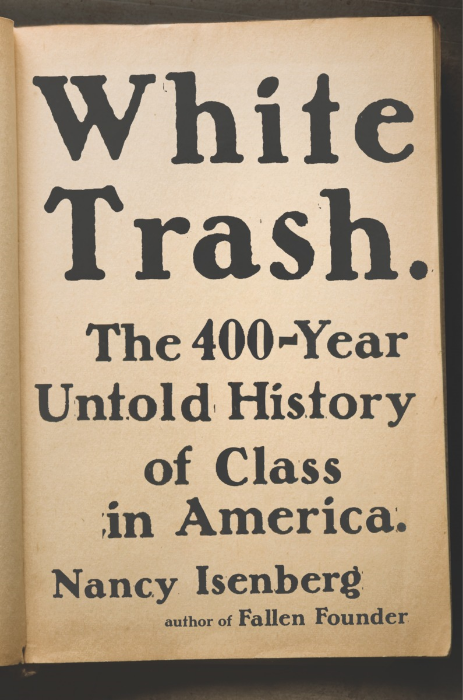 White Trash: the 400-Year Untold History of Class in America

Conventional wisdom holds that seminal social problems in America and Britain are contrasted thusly: “Britain has class; America has race.” It’s neat and memorable. In Nancy Isenberg’s White Trash, it’s also wrong. In her view, class distinctions have existed in American history since the beginning—both in theory and in practice. Despite the mantra that “all men are created equal,” few “of the better sort” who have uttered those words really meant them and fewer still practiced them. To be sure race has been more pervasive, virulent and destructive in the American experience than has class, in part because few bothered to disguise either their belief in or the fact of white, Anglo-Saxon supremacy. (In Britain by contrast, discussions using class concepts have been more pervasive and explicit while race often has lurked in the background.)

White Trash is challenging and important. Looking at American history through the prism of class potentially introduces a rainbow of social distinctions thus complexifying the black and white analysis that tends to dominate discussions about some of the darker issues in American history. Still, I am not entirely persuaded by her approach, as important as it is.

Allow me a tangent: in Britain thinking about class over the centuries has produced a rich tapestry of classes. Marxism aside, there are and have been classes inhabiting both the urban and rural worlds in the U.K. The landless peasantry in the countryside was just one of the classes that was identified, discussed and feared. Peasants who owned some land came to be termed “yeomen” and were described in mostly positive terms compared to the landless. (Think Jefferson in America.) Above the yeomen emerged a class of owners with more expansive land holdings, the gentry or the squirearchy who, over time, came to be described as “gentlemen.” Their sons and daughters did not frequently marry the children of yeomen. None of these classes were remotely close to being called aristocratic. And this was just in the countryside. The citified classes were equally as complex and stratified.

Isenberg’s class analysis of American society seems to suggest that our experience of class is limited to “us whites” and “them whites,” the middle class and the White Trash. This originated as a consequence of the kind of immigrants that Britain sent to our shores and wilderness; they sent mostly their failures. Here, some succeeded. Some continued to fail in all things except propagation. The failures came to be called by many names, White Trash being Isenberg’s chosen moniker. Her focus on White Trash, the dump heap of American society, has an unfortunate result. It puts too much emphasis on the rural South. True she allows some White Trash to migrate north such as The Beans of Egypt, Maine, but Deliverance is closer to her main theme.

This caveat aside, White Trash is a wide-ranging historical discussion that is wise and thoughtful both about the past as well as present American society. It made me reflect on my own origins. Many of my immediate ancestors were landless farmers in rural America: Texas, Oklahoma, and Kansas. I remember hearing a few of my many aunts, uncles and dozens of first-cousins describe each other in words that equate to White Trash, but mostly the term was reserved for those outside the family. It was particularly used by those who had moved to town and had taken laboring jobs in one of the aircraft factories when referring to those who were still rural. It was also used by my town relatives to describe the African-Americans they either lived or worked beside. In the case of Blacks, the word “white” was dropped and the word “Nigger” was substituted—Nigger trash. This observation prompts at an important argument in Isenberg’s book. When White families achieved a scant inch of upward mobility, they immediately tried to build a stone floor separating themselves permanently from those below, be they Black or White.   – Neal Ferguson 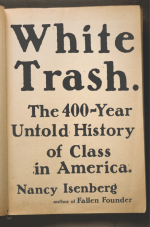 Neal Ferguson is a self described Anglo-phile. After studying for a PhD in British history and doing research for a year in various British archives, he came to the University of Nevada in 1970 to teach. Soon he found himself in administration where he remained until 2003. After returning to full-time teaching a decade ago, he decided to concentrate his teaching energies on Medieval British history and various global aspects of World War II. Dedicated to Ambrose Bierce’s proclamation that the purpose of war is to teach Americans geography, Neal insists that his students accompany him (in class) to sundry east European rivers and steppes, African deserts and jungles, south-east Asian mountain ranges and peninsulas, and small islands and coral reefs in the Pacific. Currently he is writing a book about the ups and downs of General Douglas MacArthur’s military reputation.
More from this reviewer
PrevUprooted
Salt to the SeaNext