Home » Reviews » Recollections of My Nonexistence

Recollections of My Nonexistence

Recollections of My Nonexistence – Solnit’s memoir, essays steeped in her honest reflection of an intellectual life well-lived.

Rebecca Solnit, a contemporary public intellectual, is the author of more than twenty non-fiction books and collections of essays ranging from history to the Western Shoshone to nuclear testing to feminism. She is careful in her memoir, Recollections of My Nonexistence, not to deny the importance of her more youthful authorial concerns but clearly states that she has moved beyond some of them to concentrate on themes more central to her current commitments and identity: the American West, the sense of place, the environment, and feminism. In RMN Solnit mixes intellectual issues with their social application, a combination that has been historically referred to as praxis although she doesn’t use the term.

Her evolving awareness of her nonexistence—one can only assume that she chose the word carefully—courses through Recollections of My Nonexistence, originating as a trickle and emerging as a wide river. During her childhood, her father evidently beat her and her mother as a regular alcohol-induced ritual, attempting to whack the women around him into nonexistence. Other examples abound over the course of four decades or so until “nonexistence” becomes ironic when applied to her. By the time her well-known essay appeared, “Men Explain Things to Me,” there could be little doubt that she had achieved considerable existence. Her personal space seems far less violable even though the attacks on it would continue. As she alludes, the cracks in her sense of self had been filled in with gold as are such cracks, too, that occur in ancient Japanese pottery. The resultant pot has strength, resilience, and beauty and is a celebration of “crackedness.”

Facing such a dazzling metaphor, I admit to having written this review of Recollections of My Nonexistence with some hesitation. I am a guy. I have undoubtedly contributed to the nonexistence of some women in my life. I told myself to “take a breath. Don’t be defensive. She doesn’t even know you.”  Rather, RMN is a recounting and analysis of one woman’s experience as seen through a kaleidoscopic lens: how she has come to understand the value, the legitimacy of her personhood—her agency—despite living in an often-hostile world. On one level it is a well-known story: how the rights assumed inherent only to property-owning men slowly and unevenly have become inherent to all people, at least at the conceptual, intellectual level. (Although not in the U.S. Constitution.)  Her memoir brings the all-men-are-created-equal formulation into critical focus as she asks, in essence, if I am equal, why is this man, in this place, at this time denying my existence?

I enjoyed her examples of a “sense of place” to her intellectual and social consciousness. Initial chapters of RMN sketch out in exquisite, affectionate detail the look, feel, and context of a San Francisco apartment she lived in when she was a twenty-something—the linoleum on the floor, the layers of disintegrating wallpaper, a small desk on which she has written “millions of words” in longhand, the neighborhood, the diversity of people on the street, the Castro, a movie theater.  Her sense of place expands over time to include the American West more generally: Arizona, New Mexico, and Nevada among other states. She meets Shoshones in Nevada and lives among them using her white pickup as a camper. Yearly, she attended protests at the Nevada Test Site where she met and befriended Bob Fulkerson, an activist well-known in Nevada’s progressive circles. Point of interest. She names and discusses at length many men such as Bob Fulkerson in her memoir—gay men, straight men, good men, antagonistic men, etc. She also mentions but never names any of her boyfriends. She calls them “boyfriend.” Curious. Important? Perhaps she decided to keep her private life private.

Her style, based on her obvious love of words, mixes narrative with analytical prose in a satisfying way. She doesn’t present a story having a definite ending although she is hopeful that the moral universe bends towards justice. –  Neal Ferguson

Also available by Rebecca Solnit: Men Explain Things to Me; A Field Guide to Getting Lost; Hope in the Dark; Wanderlust; A Paradise Built in Hell; The Mother of All Questions; River of all Shadows; Infinite City: A San Francisco Atlas; Encyclopedia of Trouble and Spaciousness; Savage Dreams; A Book of Migrations; Storming the Gates of Paradise; As Eve Said to the Serpent; Hollow City; Secret Exhibition; A California Bestiary; Motion Studies; Yosemite in Time: Ice Age; Nonstop Metropolis: A New York City Atlas; Left in the Dark, Portrait of San Francisco Movie Theatres; Streetopia; The Sky Book; Drowned, the Death and Rebirth of Glen Canyon on the Colorado; Unraveling the Ripple; Michael Lundgren, Transfigurations; Petah Coyne; Michael Light, Lake Las Vegas/Black Mountain; The Faraway Nearby. 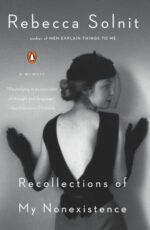 Neal Ferguson is a self described Anglo-phile. After studying for a PhD in British history and doing research for a year in various British archives, he came to the University of Nevada in 1970 to teach. Soon he found himself in administration where he remained until 2003. After returning to full-time teaching a decade ago, he decided to concentrate his teaching energies on Medieval British history and various global aspects of World War II. Dedicated to Ambrose Bierce’s proclamation that the purpose of war is to teach Americans geography, Neal insists that his students accompany him (in class) to sundry east European rivers and steppes, African deserts and jungles, south-east Asian mountain ranges and peninsulas, and small islands and coral reefs in the Pacific. Currently he is writing a book about the ups and downs of General Douglas MacArthur’s military reputation.
More from this reviewer
PrevPark Avenue Summer
ZeitounNext