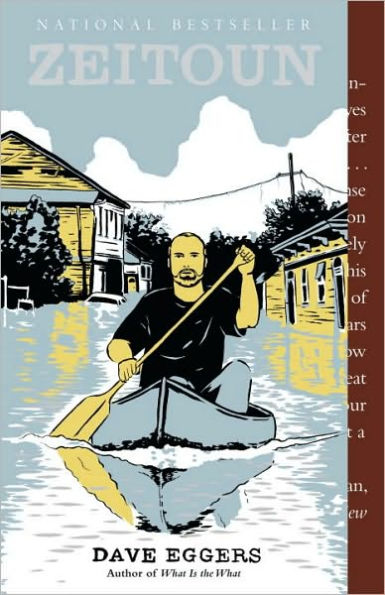 Like so many people, I watched the madness of Hurricane Katrina from afar, on my television screen, safely away from the chaos unfolding before my eyes. On one level I understood that New Orleans was spiraling out of control, but until I read Dave Eggers’ Zeitoun, the actual grotesqueries of the days after the storm were impersonal events, news stories spoken by talking heads and interpreted from a distance. Zeitoun makes the impersonal very personal indeed!

Eggers traces the real-life experiences of single New Orleans family, Abdulrahman and Kathy Zeitoun, whose lives were upended by Katrina’s pandemonium. In the days before the storm, the Zeitouns were leading a normal middle-class existence. Together, they ran a painting contractor business, with Zeitoun overseeing some thirty workers and managing jobs all over the city. Kathy kept the books. As Katrina neared Louisiana, Zeitoun and his crew were busy helping customers both past and present ready their properties for the storm.

While he worked, Zeitoun worried about his family. Meanwhile Kathy, intently listening to the news, was fretting about her husband and waffling about whether or not she and their children should evacuate. In constant phone consultation, the couple finally decided yes, she should leave the city, while Zeitoun should stay behind to look after their property. Kathy wasn’t wholly comfortable with this decision, but Zeitoun was insistent.  She and the children would be safe, and he would be fine.

What follows is that chaotic spiral I alluded to in the first paragraph. Kathy finds temporary refuge in Baton Rouge, but her brother’s house is overcrowded and the children are uncomfortable. Meanwhile, once the eye of the hurricane has passed, Zeitoun makes his way by canoe, paddling back and forth along the watery streets of New Orleans and helping whoever he can. I thought the cover art of Zeitoun was frivolous, but the canoe turns out to be a crucial part of the protagonist’s story.

Another crucial element is Zeitoun’s ethnicity. Born in Syria, he made his way to the United States and built a successful business. But that success is meaningless when the authorities, confronting him after Katrina, see only a dark-skinned man in the wreckage of New Orleans. The reader follows what happens next, while Kathy is left in the dark. For weeks she hears nothing from Zeitoun. The tension builds in her life, just as anarchy overtakes his very existence.

I can’t say anything more about this very fine book of investigative reporting without revealing too many of the revelatory surprises contained in its pages. Eggers compiled hours of interviews and researched countless corners of post-Katrina Louisiana. The result is a first-rate piece of journalism, with a focus on a single family but with lessons for all of us. Zeitoun reveals many important strands of American mayhem: our unpreparedness for a major hurricane, our inability to cope with a disaster’s aftermath, and our intolerant treatment of Americans of foreign extraction. Readers of Zeitoun will find themselves thinking long and hard about these themes, especially as they come to know Zeitoun and his beloved family.  –  Ann Ronald

Also available by Dave Eggers: The Circle; A Heartbreaking Work of Incredible Genius; The Every; What is the Why; The Monk of Mokha; A Hologram for the King; The Parade; You Shall Know Our Velocity; The Wild Things; Heroes of the Frontier; Her Right Foot; What Can a Citizen Do?; The Lifters; The Captain and the Glory; Your Fathers, Where Are They? and The Prophets, Do They Live Forever?; Short Short Stories; The Museum of Rain; This Bridge Will Not Be Gray; Faraway Things; Tomorrow Most Likely; We became Jaguars; Most of the Better Natural Things in the World; The Story of Captain Nemo; Abner & Ian Get Right-Side Up; The Best of Mcsweeney’s; Ungrateful Mammals; Teachers Have It Easy, The Big Sacrifices and Small Salaries of America’s Teachers; The Lights and Types of Ships at Night; The Voice of Witness Reader; The Best American Nonrequired Reading; Always We Go (Screenplay); Up the Mountain, Coming Down Slowly; Beyond the Possible; Understanding the Sky. 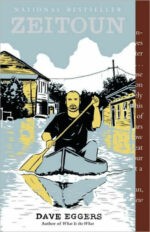 Ann Ronald is a retired English professor from the University of Nevada, Reno. Author of dozens of reviews, she’s also written a number of books about the American West. They include literary studies such as The New West of Edward Abby and Reader of the Purple Sage, cultural studies such as GhostWest and Oh, Give Me a Home, and nature writing such as Earthtones: A Nevada Album. Her latest is a work of fiction, Friendly Fallout 1953. Since retiring, she’s been reading vociferously, so “Bookin’ With Sunny” is giving her a wonderful opportunity to share thoughts about her favorite new discoveries.
More from this reviewer
PrevRecollections of My Nonexistence
Tracing TimeNext