Home » Reviews » Our Souls at Night

Our Souls at Night 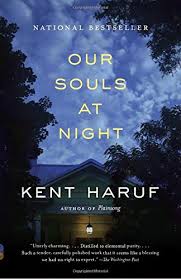 OUR SOULS AT NIGHT

What a great pleasure to recommend Kent Haruf’s last book, published posthumously in 2015. Our Souls at Night is a small gem. Haruf has left a literary legacy held fast in the fictional town of Holt, Colorado.

Holt is a small town with its inhabitants, as in all small towns, knowing just about all they need to know about one another. Or so they think. Our Souls at Night is the story of two senior citizens, seemingly at peace with their widowed lives until Addie comes knocking on the door of her neighbor Louis. After many years of widowhood, Addie decides that what she misses most of all is someone to be with through the night. Someone to talk with, to sleep next to, to fill that loneliest part of her days.

Addie and Louis are neighbors of many years. Not friends, but certainly not strangers. Cautiously, she asks if Louis might like to try out such an arrangement; to come by in the evening, share some small talk and then retire to her bedroom. She is careful to explain she is not looking for love, but for that special companionship at night – a companionship she never really experienced with her husband throughout a difficult marriage. It is Haruf’s writing with its simplicity of language, spare yet endearing, that moves both the story and the reader into a landscape of change. Addie and Louis, full of curiosity and hope, enter into the arrangement with a slowly growing delight and discovery of themselves. Old stories, regrets and secrets are shared, children are spoken of, and all the while a rare and new and unexpected intimacy develops.

What begins very privately eventually becomes known in the community of Holt. It also becomes known to their children. Haruf does not cut corners. Neither their townsfolk nor their offspring approve. Addie and Louis continue the relationship, riding out the town’s disapproval. Louis is able to deal with his daughter, but Addie’s son fears his mother is being taken advantage of. The son’s own marriage is failing and to complicate matters, while he and his wife separate, he sends his own son to live with Addie for a period of time. The young boy, instead of creating a wedge between Addie and Louis’s arragement, binds them more closely than ever.

The story is not a sweet, ever-after tale (no matter how much the reader may want it to be), but life often interferes beyond all our good intentions. Haruf has written an honest story, a very grownup story. Addie and Louis are products of a powerful rural setting and community. It is heartening to read of such characters who learn not to fear change, that bridges can be built at any age.

Our Souls at Night was the impetus for a lively discussion at the Clayton Community Book Club. Kent Haruf’s legacy of Plainsong, Eventide, Benediction, Where You Once Belonged, The Tie that Binds, and West of Last Chance (with photographer Peter Brown) is worth reading and rereading. – Sunny Solomon

Also available by Kent Haruf: Plainsong; Benediction; Eventide; The Tie that Binds; Where You Once Belonged 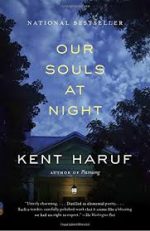 Sunny Solomon holds an MA in English/Creative Writing, San Francisco State University. She is a book reviewer for “The Clayton Pioneer” and her poetry and other writing has been published in literary journals, one chapbook, In the Company of Hope and the collection, Six Poets Sixty-six Poems. She was the happy manager of Bonanza Books, Clayton, CA and Clayton Books, Clayton, CA. She continues to moderate a thriving book club that survived the closure of the store from which it began. Sunny currently lives next to the Truckee in Reno, NV.
More from this reviewer
PrevAmerican Heiress – The whole truth and nothing but?
Murder on the Quai – Les Frances peuvent être meurtrièresNext