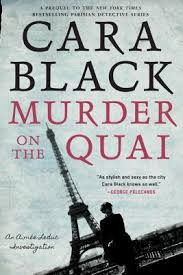 MURDER ON THE QUAI

Since Murder on the Quai is the sixteenth Aimee Leduc mystery, a series I have not been following, I was a bit apprehensive. Would a first-time reader be confused by vague references to this book’s predecessors and by specific narrative threads that have continued from one novel to the next? I need not have worried, however, because Murder on the Quai turned out to be a prequel to the other fifteen. It actually reveals hitherto untold events that preceded Aimee Leduc’s lengthy career as a private investigator.

The story takes place in 1989, when Aimee, whose father and grandfather ran a Paris detective agency, was enrolled in medical school. She wasn’t happy, however, so when an opportunity to be involved in the family business came her way, she decided to try investigating on her own. An amateur at detection and inexperienced at surveillance, she encountered many unforeseen difficulties. Readers who have followed her subsequent career will be intrigued by the youthful innocence revealed in Murder on the Quai.

Those readers will be charmed, too, by the introduction of other characters who will populate all the Aimee Leduc novels. She meets Rene Friant for the first time, a computer-savvy dwarf who will become her partner. She acquires Miles Davis, a bichon frise that will accompany her everywhere. She learns more about her American mother, who vanished when Aimee was eight. She learns more about her father, too, an enigmatic man who definitely does not want his daughter following in his footsteps.

Along with the personal aspects unveiled in Murder on the Quai, Cara Black also uncovers a strain of French history. Now and then this novel reverts to 1942, when the Germans occupied France, and tells of an incident involving gold ingots and murderous intrigue. Aimee knows nothing of that incident until she gets more deeply involved in her current case. The reader suspects connections from the outset, but I certainly enjoyed watching her growing awareness as she puts pieces of her mystery puzzle together.

Anyone who enjoys Jacqueline Winspear’s Maisie Dobbs mystery series will recognize some similarities between Maisie and Aimee. Of course Maisie’s novels take place in England after the mayhem of World War I, while Aimee’s take place in France after the holocaust of World War II, but the two women follow remarkably similar career paths from medicine to detection. Their minds work reflectively, too, as they consider history and motives. They even map their cases in similar ways, using arrows and logic to connect events and characters. Aimee, who is younger and more inexperienced in Murder on the Quai, is more impetuous than Maisie, but that may change as she matures.

I guess I’ll find out, because I definitely plan to read more Aimee Leduc mysteries. If the other fifteen novels are as well-written as the latest one, I have much to anticipate. – Ann Ronald 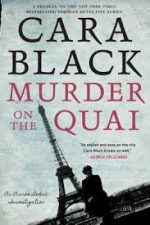 Ann Ronald is a retired English professor from the University of Nevada, Reno. Author of dozens of reviews, she’s also written a number of books about the American West. They include literary studies such as The New West of Edward Abby and Reader of the Purple Sage, cultural studies such as GhostWest and Oh, Give Me a Home, and nature writing such as Earthtones: A Nevada Album. Her latest is a work of fiction, Friendly Fallout 1953. Since retiring, she’s been reading vociferously, so “Bookin’ With Sunny” is giving her a wonderful opportunity to share thoughts about her favorite new discoveries.
More from this reviewer
PrevOur Souls at Night
HeadlongNext