Home » Reviews » American Heiress – The whole truth and nothing but?

American Heiress – The whole truth and nothing but? 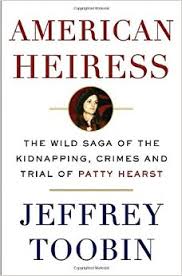 AMERICAN HEIRESS: THE WILD SAGA OF THE KIDNAPPING, CRIMES AND TRIAL OF PATTI HEARST

A lawyer by training and a writer by profession, Jeffrey Toobin investigates and re-examines famous/infamous courtroom confrontations—United States v. Oliver North, the People v. O. J. Simpson, the impeachment of President Clinton, the 2000 election recount and debate. Now Toobin has explored a new cause celebre—the kidnapping, the multiple crimes and the subsequent trial of Patricia Campbell Hearst, whose ordeal with the Symbionese Liberation Army caught the American imagination in the 1970s. American Heiress: The Wild Saga of the Kidnapping, Crimes and Trial of Patty Hearst tells her story, with all of its inherent contradictions, its countless variations, its unanswered questions.

On February 4, 1974, a ragtag, loose-knit group of radicals invaded the Berkeley apartment that Patty Hearst shared with her boyfriend. The so-called SLA took Patty hostage, intending either to swap her for two of their members who were currently in jail, or to ransom her, or simply to use her for ill-defined purposes of propaganda. Led by a peripatetic but charismatic man who called himself Cinque, and already responsible for the murder of Oakland’s public school superintendent, the small group wanted to call attention to their rebellion and to make a further political statement. Precisely what they intended to accomplish, however, was unclear at the time. From the beginning of their escapade, the SLA was undisciplined and unfocused, with random requests to the Hearst family, vague political tirades, and long periods of silence when they couldn’t agree about what to demand or say.

Patty Hearst’s interactions with the Symbionese Liberation Army made headlines. At first, the public sympathized with her plight. Then, gradually, Patty herself became radicalized. From victim to active participant, her role changed, culminating in two bank robberies, several bombing forays, and willing flight. Inexplicably, she came to see the establishment as the enemy and the SLA as her benefactors. Dressed in army fatigues and waving an automatic rifle, Patty wholly identified with her captors and opportunistically joined in their reckless behavior. When five members of the SLA were killed in a shoot-out with police, she and two others fled cross-country, evading the authorities for nearly a year until they foolishly returned to California. Ultimately arrested and brought to trial, Patty then distanced herself from her heretical deeds. She swiftly reverted to the role of heiress, discounting whatever acts she had performed while under duress. The Stockholm Syndrome became her defense, while the press and the public debated how to interpret her behavior.

Because Patty told inconsistent versions of what happened to her and what she did as a result, the Patty Hearst story is full of contradictions. Toobin includes every variant, pointing out the many discrepancies she shared at different times with her family, friends, and lawyers, as well as the contradictory narratives she offered under oath. Her rebellious compatriots told dissimilar stories, too, so Toobin had to sift through multiple, paradoxical accounts.

American Heiress could not be more thorough. As Toobin explains in his notes, he pursued every known piece of documented evidence as he put together Patty’s implausible story. The one person Toobin didn’t consult was Patty Hearst herself. She published her own account of her tribulation, the ghostwritten Every Secret Thing, but she refused to participate in Toobin’s project. Nonetheless, American Heiress is exhaustively thorough, examining Patty’s extraordinary escapade in excruciating detail and also investigating the counter-culture of the late 1960s and early ‘70s. And, like Toobin’s other books, American Heiress exposes the disarray of a legal system not designed to adjudicate the unusual. – Ann Ronald

Also available by Jeffrey Toobin: A Vast Conspiracy; The Nine; Those Who Forget the Past; Too Close to Call; The Oath; The People vs. O.J. Simpson. 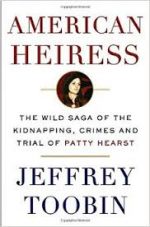 Ann Ronald is a retired English professor from the University of Nevada, Reno. Author of dozens of reviews, she’s also written a number of books about the American West. They include literary studies such as The New West of Edward Abby and Reader of the Purple Sage, cultural studies such as GhostWest and Oh, Give Me a Home, and nature writing such as Earthtones: A Nevada Album. Her latest is a work of fiction, Friendly Fallout 1953. Since retiring, she’s been reading vociferously, so “Bookin’ With Sunny” is giving her a wonderful opportunity to share thoughts about her favorite new discoveries.
More from this reviewer
PrevInhabited – How Today’s West is Won or Lost
Our Souls at NightNext