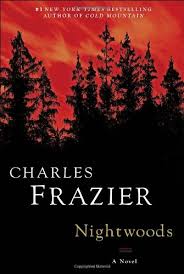 I rarely find myself speechless when I finish reading a novel. In fact, I rarely find myself speechless. But that is exactly how I felt when I finished Charles Frazier’s Nightwoods. Even now, as I begin to write this review, I’m uncertain about what to say. The entire book is gripping, but the final section is absolutely mesmerizing. Powerful, eye-popping, and absolutely mesmerizing.

Ostensibly, Nightwoods is not a novel that should appeal to me. Set in North Carolina in the 1960s, the narrative is full of an eclectic assortment of unfortunate people. Luce, whose childhood was difficult at best, has isolated herself from society as the caretaker of an old, decrepit lodge. She fills her days with seasonal observations, gardening, and mundane tasks, interacting with others as infrequently as possible. In fact, her only sustained contact with the outside world is a derelict radio, which bleats static and lonesome songs late into the night. Shortly after Nightwoods begins, however, Luce’s peace and quiet begins to unravel. The elderly owner of the lodge dies, and his lackadaisical grandson inherits the family property. More significantly, Luce’s only sister is murdered, and Luce inherits a niece and a nephew, a pair of twins thoroughly damaged by their stepfather and what they undoubtedly saw him do to their mother. I say that cryptically because, throughout most of Nightwoods, the twins don’t talk, except in gibberish to each other. Suffice to say they are damaged goods, severely damaged.

So here is a novel set in a part of the country relatively unfamiliar to me, populated with maltreated victims and lost souls. The twins are not the only characters who communicate poorly. Normally I wouldn’t look twice at a book with such a description, but I thoroughly enjoyed Frazier’s first two novels. Cold Mountain and Thirteen Moons were historical fiction, which I especially appreciate, so I thought I would give Nightwoods a try. And I was absolutely fascinated.

In some ways, the book is a tour de force. The writing is excellent, dancing around the awkwardnesses of the characters, dipping into the histories, tantalizing in what is left unsaid. The writing is tactile, too, pulling a reader into the unforgiving North Carolina mountains. But just as Luce loves her landscape, seeing it softly rather than harshly, a reader cannot help being attracted to the seasonal variations of sweat and snow. Equally compelling is the way Luce approaches her sister’s children, teaching them woodland ways rather than forcing them into a more civilized mode. They’re definitely not ready for interaction with others, but they’re increasingly able to grow attuned to the natural world. A horse named Sally makes all the difference.

But there is a snake in this garden, the twins’ step-father who inexplicably has side-stepped the law. That is why the final sixty pages are so mesmerizing, as evil converges on Luce’s safe haven and her sanctuary is broken. Of course I won’t reveal the ending, but I can definitely promise that no reader will put the book down without finishing. Filled with tweaks and twists and turns, Nightwoods follows no formula and meets no foreordained expectations. It simply holds the imagination hostage. Better than Cold Mountain and Thirteen Moons? I think so.   – Ann Ronald

Ann Ronald is a retired English professor from the University of Nevada, Reno. Author of dozens of reviews, she’s also written a number of books about the American West. They include literary studies such as The New West of Edward Abby and Reader of the Purple Sage, cultural studies such as GhostWest and Oh, Give Me a Home, and nature writing such as Earthtones: A Nevada Album. Her latest is a work of fiction, Friendly Fallout 1953. Since retiring, she’s been reading vociferously, so “Bookin’ With Sunny” is giving her a wonderful opportunity to share thoughts about her favorite new discoveries.
More from this reviewer
PrevFive Came Back
Act of WarNext