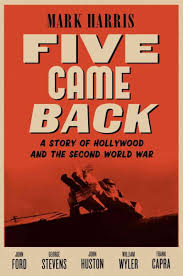 Five Came Back: A Story of Hollywood and the Second World War

December 7, 1941 came and five Hollywood directors went. John Ford, George Stevens, John Huston, William Wyler, and Frank Capra—all A-list directors—all got up from their directors’ chairs, all put aside their megaphones, all put on naval or army officers’ uniforms and went off to remote places to help in the war effort. To be sure, they grabbed cameras not rifles. But I challenge you to name one A-list director who volunteered for Korea, Cuba, Vietnam, Grenada, Lebanon, Kuwait, Kosovo, Iraq, or Afghanistan. In future wars, I suppose embedded directors were replaced by embedded photo-journalists. This is not a topic Harris raises in Five Came Back, but its absence in no way detracts from what he achieves in this sophisticated, thoroughly researched, and intriguing book.

There is no generalization that easily corrals these five directors except that they volunteered to serve their country. They all knew each other but found themselves in somewhat different stages of their careers in 1941. John Ford and Frank Capra were the senior directors, each having already won three Oscars for Best Director (OBD). George Stevens was best known in 1940 for lighter fare such as the Fred Astaire and Ginger Rogers’ movies. Huston and Wyler, tennis buddies, were hankering after their first Oscars. At the time Huston was better known for his acting and script writing. Wyler would receive his first OBD in 1942 for Mrs. Miniver. Ford and Capra were Roman Catholics, although one was Irish and the other was Italian. Wyler, Jewish, was born in German Alsace. Huston, Ford, and Stevens were high-functioning alcoholics. The five’s movies were dissimilar, too. Even the documentaries they made during the war ran the gamut. Easily the most memorable was Ford’s Midway, filmed by him and his other cinematographers as Japanese planes bombed the island, wounding Ford and creating the famous, authentic camera wobble

When Ford joined the Navy (he was already in the naval reserve) and the other four joined the Army, they were all entering uncharted, shark-infested waters. They were used to a certain amount of independence and authority although they worked for the major Hollywood studios. Leaving Hollywood, they entered into military bureaucracies that wanted them to produce propaganda. While not averse to the task—indeed they applauded the opportunity—neither they nor the military had the minutest of an idea about what that meant or entailed. Were propaganda films supposed to be for training and motivating the troops? How about releasing some into civilian theaters? How completely and viscerally were the films supposed to demonize the Germans and Japanese? How did documentaries fit into their responsibilities? If encouraged, who would determine their subject matter? Would they show the actual carnage of war? Would they show psychological trauma as well as blunt force trauma? And where would the money come from? Who would furnish the cameras, cameramen, film, and editing? Who was in charge? The range of what these men actually produced during the war is testimony to their creativity in choosing topics and themes on the fly with much less oversight than what one might have expected. (Nearly everything they filmed and edited can be found on YouTube.)

After the war, the five directors returned home ready to change Hollywood. Alas, they were ahead of their time. They did change, however, the kind of movies they made, except for Capra. To my mind, the most interesting transformation was that of William Wyler who produced an honest look at the effect of the war on three returning veterans in The Best Years of Our Lives (1946), to me, the best motion picture about World War II created in the 1940s. Read Five Came Back, then grab some popcorn and watch Wyler’s movie. You won’t be disappointed by either.   – Neal Ferguson

Neal Ferguson is a self described Anglo-phile. After studying for a PhD in British history and doing research for a year in various British archives, he came to the University of Nevada in 1970 to teach. Soon he found himself in administration where he remained until 2003. After returning to full-time teaching a decade ago, he decided to concentrate his teaching energies on Medieval British history and various global aspects of World War II. Dedicated to Ambrose Bierce’s proclamation that the purpose of war is to teach Americans geography, Neal insists that his students accompany him (in class) to sundry east European rivers and steppes, African deserts and jungles, south-east Asian mountain ranges and peninsulas, and small islands and coral reefs in the Pacific. Currently he is writing a book about the ups and downs of General Douglas MacArthur’s military reputation.
More from this reviewer
PrevThe Martian
NightwoodsNext