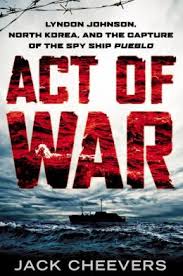 Act of War: Lyndon Johnson, North Korea, and the Capture of the Spy Ship Pueblo

As we have learned since 2001, if we didn’t know already, trying to assure national security is an ambiguous, messy business in part because it involves spying—one of the world’s oldest professions. Messy, but vicariously thrilling. If war is an attempt to achieve political ends by other means, so is spying. But wars are somewhat public events. Spying is mostly clandestine unless something goes wrong as it did with the spy ship the USS Pueblo. Hence, deniability is important. So is expendability. At the outset of the Pueblo incident President Johnson underlined this inconvenient truth when he told some Congressmen: “When you send out a spy, he sometimes does not come back.” But what if you send out eighty-two Americans, most of whom are unwitting and unknowing spies, and they get taken captive? Are they expendable?

In Jack Cheevers’ An Act of War, the answer is an unequivocally negative.

Before discussing a few of this story’s compelling intricacies, I’d like to consider briefly the implications of Cheever’s book title. What constitutes an act of war? From North Korea’s perspective, Pueblo’s electronic surveillance operating off its coast in January 1967, was warlike. From the U.S. point-of-view, the North Korean capture of the Pueblo in international waters was an act of war. So, both sides expressed public justification for going to war with each other. In this case, despite an immense amount of sabre rattling by both sides—troop concentrations, air power buildup, naval concentration—the national interests of neither the US nor North Korea included official war. Their interests were limited to getting the crew back on the one side and securing a U.S. admission of guilt on the other. In other words, diplomacy prevailed.

Cheevers, basing his book on vast amounts of source materials, recent interviews with survivors, and several other books on the topic, weaves a compelling, pell-mell account of the Pueblo’s near disastrous adventures. He keeps the crew of the Pueblo, particularly its captain, Commander “Pete” Bucher, precisely in the eye of the political hurricane that blew around and over them. They were held captive for eleven months and routinely abused physically and mentally. We are given detailed descriptions of this calculated brutality. Meanwhile, President Johnson, senior U.S. diplomats (both political and military), President Chung Hee Park of South Korea and General Chung Kuk Pak of North Korea acted and reacted, sometimes publicly, but mostly privately. Congress and the American media kept the crew’s ordeal immediate.

Within a few days of the Pueblo’s capture, the U.S. and North Korea began exploring reconvening truce talks at Panmunjom, where the talks that brought the Korean War to a fitful truce in 1953. Although the U.S. tried to reassure President Park that the talks would not jeopardize South Korean security, he was neither amused nor reassured by the continued negotiations between the Americans and the North Koreans, talks that dragged on until December 23, 1967. Park was right in being more than wary. He believed that the capture of the Pueblo was in part an effort by the North Koreans to deflect bad publicity for the failed attack by North Korean assassins on the South Korean President just a few days previously, the Blue House raid. Preventing South Korea from launching a retaliatory strike against North Korea during the negotiations fell to LBJ’s masterful envoy, Cyrus Vance.

After eleven months of imprisonment, Commander Bucher and his men walked across a bridge separating North and South Korea, freed in time for Christmas and heroes’ welcomes. Their release required a diplomatic formula that was both clever and bewildering. I won’t tell you what it was. Moreover, their freedom comes about three-fourths through the book. The remaining chapters detail an extraordinary de-briefing, formal military review, and espionage revelations that stunned me. I suspect they will stun you, too.    – Neal Ferguson

Neal Ferguson is a self described Anglo-phile. After studying for a PhD in British history and doing research for a year in various British archives, he came to the University of Nevada in 1970 to teach. Soon he found himself in administration where he remained until 2003. After returning to full-time teaching a decade ago, he decided to concentrate his teaching energies on Medieval British history and various global aspects of World War II. Dedicated to Ambrose Bierce’s proclamation that the purpose of war is to teach Americans geography, Neal insists that his students accompany him (in class) to sundry east European rivers and steppes, African deserts and jungles, south-east Asian mountain ranges and peninsulas, and small islands and coral reefs in the Pacific. Currently he is writing a book about the ups and downs of General Douglas MacArthur’s military reputation.
More from this reviewer
PrevNightwoods
The AccidentNext