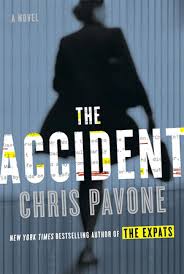 Wow! Paragraph after paragraph, page after page, Chris Pavone’s new novel, The Accident, just keeps coming at the reader, not like a runaway freight train but like something even more powerful, yet much more graceful, too. A drone, perhaps, sleek, svelte, omnipresent, omnipotent, aware of what is happening in each character’s life and ready to cause instant havoc at any given moment. The pace never stops; the surprises never pause long enough for the reader to catch his or her breath. I always enjoy a good thriller, and The Accident is one the best I’ve read in a long, long time. Until the final sentence, I wasn’t sure how it would end. It turns out that my speculations were mostly incorrect; the end, however, was totally satisfying.

The Accident begins when an anonymous book manuscript arrives over the transom in the office of Isabel Reed, a literary agent who badly needs a new star. She offers the book to an old friend, an acquisitions editor whose career also has been faltering. Other people surreptitiously begin reading the manuscript, too—Isabel’s assistant, a rights editor who wants the book for herself, a film producer, editorial management, and other staff. No one who begins to read the pile of paper can put the pages down. Everyone knows the book will be an instant hit. Number One on the Bestseller List. And then, mysteriously, one by one, those who read the pages begin to die.

The manuscript is an exposé of the life of a famous media mogul. It purports to tell the truth about a mysterious accident that occurred while he was in college, plus further truths about how he secretly manipulates current events to secure maximum exposure for himself and his media empire. Essentially, the manuscript reveals the inner nature of a man who stops at nothing to successfully get what he wants. Interspersed throughout Pavone’s novel, The Accident, are excerpts from the exposé, also named “The Accident.” The actions taking place in The Accident occur within the span of a single day, while “The Accident” reveals the past. The men and women who populate The Accident recall the past as well, so the reader soon is immersed in a story that spreads over decades but focuses on a single twenty-four hours in the present. Back and forth, the novel weaves its chronological threads seamlessly together.

Who wrote the anonymous manuscript? Should it be published? Is it even safe to publish? And why are people dying? Who, or what, is causing so many unexpected deaths? The answers are not as straightforward as the reader suspects. Those answers are surprising, even startling, as the characters move toward their fates. From Switzerland to New York to California, from gritty editorial offices to posh salons to isolated country roads, even through the stutter-step stages of book acquisition, production, and sales, the action careens from one confrontation to the next. Mysterious forces—my metaphorical drone that the author is silently maneuvering with the deftness of a supercomputer—are challenging the characters, upending their expectations, and often curtailing their lives. Some are innocent; others, guilty. But no one, and especially not the reader, can escape the thrust of Pavone’s potent prose.   – Ann Ronald

Ann Ronald is a retired English professor from the University of Nevada, Reno. Author of dozens of reviews, she’s also written a number of books about the American West. They include literary studies such as The New West of Edward Abby and Reader of the Purple Sage, cultural studies such as GhostWest and Oh, Give Me a Home, and nature writing such as Earthtones: A Nevada Album. Her latest is a work of fiction, Friendly Fallout 1953. Since retiring, she’s been reading vociferously, so “Bookin’ With Sunny” is giving her a wonderful opportunity to share thoughts about her favorite new discoveries.
More from this reviewer
PrevAct of War
The Ordinary TruthNext