Home » Reviews » Fiction » The Naked and the Dead

The Naked and the Dead 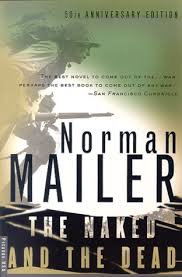 Norman Mailer’s the Naked and the Dead was on my bedside stack for years.  No longer able to avoid it, I read the 1998 50th Anniversary Edition. Mailer provided a preface to this edition in which he critiqued the writing style of his youthful self, but also noted with some feeling that this was the best selling of his novels. His wistfulness, chagrin, and hint of sour grapes seem a bit forced.  As a cultural icon, obscurity escaped him.  But one thing is certain, although Naked was his first novel, written at the age of twenty-five, his subsequent novels did not surpass the first in terms of sales and popularity. Only one other novel, Tough Guys Don’t Dance, become a movie, but it was a far better movie than was the fecal film version of The Naked and the Dead.  Naked, however, remains a powerful if flawed book. I should have read it long ago.

Although it’s unusual to use Hollywood as a way to frame a review of a novel, bear with me. Throughout the war (WWII) and for a decade or so afterward, Hollywood cranked out dozens of “combat movies” that followed a somewhat predictable formula whether the action took place on land or sea or air.  In these films, a small group of multi-ethnic (but non-Black) Americans undertook a dangerous mission, during which there was at least one bad egg among them, but a natural leader would emerge. Then the soldiers coalesced into a successful fighting unit despite their differences.  By example, the group projected and defended American ideals although overt patriotism took a back seat to comradeship.  Out of the melting pot came strength and cooperation. E pluribus unum.

Norman Mailer’s genius, if that is the right word, was manifested by his ability to write disquieting variations on the Hollywood trope of the World War II Combat Movie.  He turned many of the cinematic conventions inside out so completely and appealingly, that subsequent writers and film producers have in turn made his inventions into clichés.  Mailer introduced the American reading public to the ubiquitous use of the word fuck among the America’s WW II soldiery.  For reasons that subsequently embarrassed him the word appeared in Naked as fug or fugging.  Decades later, Tim O’Brien, perhaps the best American war novelist ever, would caution his readers: do not send your children to war if you don’t want them to return home mouthing obscenities.

As for the melting pot, the various hyphenated Americans retain their lumpiness in Mailer’s portrayals.  The army’s caste and command system prevails, not American ideals.  Ultimately, whether Lt. Hearn’s platoon succeeds or fails is of little concern to his superiors.  That the platoon performed as ordered—cross an impossible island terrain to attack a Japanese regiment from the rear—is all that matters.  When subsequent events make the platoon’s courageous efforts meaningless, their efforts are ignored.  Lt. Hearn’s death is only a momentary inconvenience.  Mailer does make some nod in the direction of comradeship, but it is tinged with ambiguity.  When General Cummings’s unstated homosexual feelings for Lt. Hearn are no longer tenable, he orders Hearn to leave HQ and assume leadership of the platoon.  The members of the platoon show determination to rescue a dying comrade, not out of any affection, but because they adhere to the Army’s definition of duty: “don’t leave wounded comrades behind.” In the end, the only thing that gives this war meaning is personal survival, but many die for no reason other than random chance.

Although, much of the novel now seems dated and contrived, I must remind myself that it seems so in part because of Mailer’s success in influencing subsequent writers and film producers. Also, there was that later war, Viet Nam, that reinforced the now widely held perceptions that every war is obscene and evil—perceptions that Mailer shouted out in 1948.    – Neal Ferguson

Also available by Norman Mailer: The Executioner’s Song; The Armies of the Night; An American Dream; Advertisements for Myself; The Castle in the Forest; The Gospel According to the Son; Oswald’s Tale; Why Are We in Viet Nam; Ancient Evenings; Barbary Shore; Harlot’s Ghost; Miami and the Siege of Chicago; The White Negro; Of a Fire on the Moon; The Prisoner of Sex; The Fight; The Spooky Art; The Presidential Papers; Of Women and Their Elegance; The Time of Our Time; Marilyn; Picasso; Why Are We at War?; Modest Gifts; Tough Guys Don’t Dance; Conversations with Norman Mailer; A Century of Arts & Letters. 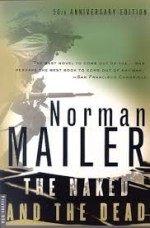 Neal Ferguson is a self described Anglo-phile. After studying for a PhD in British history and doing research for a year in various British archives, he came to the University of Nevada in 1970 to teach. Soon he found himself in administration where he remained until 2003. After returning to full-time teaching a decade ago, he decided to concentrate his teaching energies on Medieval British history and various global aspects of World War II. Dedicated to Ambrose Bierce’s proclamation that the purpose of war is to teach Americans geography, Neal insists that his students accompany him (in class) to sundry east European rivers and steppes, African deserts and jungles, south-east Asian mountain ranges and peninsulas, and small islands and coral reefs in the Pacific. Currently he is writing a book about the ups and downs of General Douglas MacArthur’s military reputation.
More from this reviewer
PrevThe Colony of Unrequited Dreams
An Unfinished Life and Bone FireNext