The Colony of Unrequited Dreams 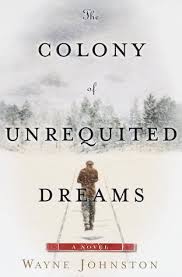 Wayne Johnston, writing The Colony of Unrequited Dreams, fictionalizes the life of Joe Smallwood, a real-life twentieth-century Newfoundland politician. In so doing, Johnston presents a facetious romp through Newfoundland history. I suspect that most “Bookin’ with Sunny” readers know as little about the settlement and scenery of this distant island as I do, so this novel offers some welcome education. It brushes past centuries of the colony’s travails as its settlers suffered under various British administrators and struggled to decide whether their territory should remain a colony, fight for independent nationhood, or join Canada as a confederated province.

Joe Smallwood, the man who helped bring the debate to the ballot box in 1948, is the unlikely focus of The Colony of Unrequited Dreams. Punctuated by tongue-in-cheek snippets of Newfoundland’s colonial history, the novel follows his life from start to finish. It begins with his boyhood, his alcoholic father and his Pentecostal mother, and continues along the paths of a series of checkered careers. Newspaperman, union organizer, radio broadcaster, pig farmer, politician, Joe makes his improbable way. His personal story culminates with his successful confederation efforts to join Newfoundland with Canada and his subsequent election as the first premier of the new province.

But this fictive version of his life, as narrated by Smallwood himself, is only part of the story. Interspersed with his first-person reconstruction of his career are prose excerpts written by his friend, Sheilagh Fielding. Smallwood met Fielding, as he calls her, while attending a boys’ school that adjoined a nearby girls’ school. Throughout the novel, their careers diverge and intersect, pull them together and push them apart. Fielding, an accomplished journalist, writes a satirical newspaper column, pens ironic correspondence to other characters (letters she never sends), and authors an abridged Newfoundland history that lampoons the past. All of these disrupt and accentuate Smallwood’s narrative recollections, a sardonic commentary on whatever he does and whatever he tries to say.

Many authors who write historical fiction conclude their novels with an Author’s Note that explains what is true and what has been imagined. Wayne Johnston chooses to leave his readers in the dark. Given my own limited knowledge of Newfoundland history, I do wish he had helped me out. Certainly his descriptions of the land, “a country hemmed in and cored by wilderness,” impress me as totally accurate and astute. And some of the set pieces, such as the chapters describing the violence of seal hunting, are graphic and explicit. About the remainder of The Colony of Unrequited Dreams, however, clues as to what is true and what is imagined are cloaked in caustic exchanges and sarcastic asides. I came to believe that whenever Johnston’s prose turned satirical, he meant the reader to take what is written with a grain of salt. But I can’t be sure.

If I’m not certain about what is false and what is true, I can be confident in the centrality of the political quarrels about Newfoundland’s fate. Those who argued for independence were horrified by confederation with Canada, while those who capitulated did so purely for economic reasons. In presenting these quarrels, The Colony of Unrequited Dreams seems to be accurate. I’m less confident about the inner truth of the portrayal of Joe Smallwood, but I know I liked the book. For sure, I relished the creative corrosive spin that, time and again, turned his story upside down.

PS After I drafted this review, I learned that Johnston has written a “sequel,” not about Joe Smallwood but about Sheilagh Fielding and her fate. The Custodian of Paradise is a novel I plan to read.    – Ann Ronald

Also available by Wayne Johnston: The Navigator of New York; The Custodian of Paradise; Baltimore’s Mansion; The Son of a Certain Woman; Human Amusements; The Old Lost Land of Newfoundland; A World Elsewhere; The Devine Ryans; Fat is Censored; Mercy Among the Children; Peace, Love & Petrol Bombs; The Story of Bobby O’Malley; The Devine Ryans. 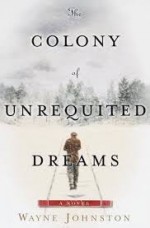 Ann Ronald is a retired English professor from the University of Nevada, Reno. Author of dozens of reviews, she’s also written a number of books about the American West. They include literary studies such as The New West of Edward Abby and Reader of the Purple Sage, cultural studies such as GhostWest and Oh, Give Me a Home, and nature writing such as Earthtones: A Nevada Album. Her latest is a work of fiction, Friendly Fallout 1953. Since retiring, she’s been reading vociferously, so “Bookin’ With Sunny” is giving her a wonderful opportunity to share thoughts about her favorite new discoveries.
More from this reviewer
PrevMemories of a Marriage
The Naked and the DeadNext