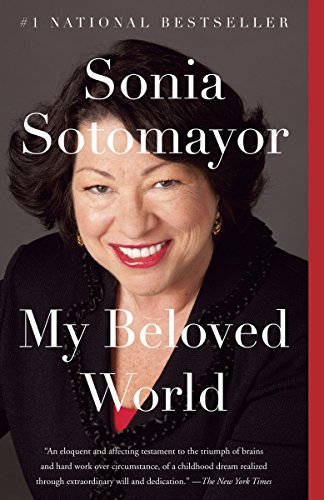 Sonia Sotomayor, Associate Supreme Court Justice, brings the breadth and depth of her lived experiences to her memoir, My Beloved World.

Supreme Court Associate Justice Sonia Sotomayor’s memoir, My Beloved World, attests to what many of us strongly believe—judges should reflect the multiplicity of the United States. They should not be privileged clones. Rather, they should bring both a breadth and a depth of lived experiences, as well as a rigorous knowledge of the law to their tenure on the bench.

My Beloved World recounts Judge Sotomayor’s memories of her life before being appointed first to the U. S. District Court, Southern District of New York, then to the Second Circuit Court of Appeals, and finally to the U. S. Supreme Court. She describes her childhood in the Bronx, raised by an alcoholic father who died when she was nine and a hard-working mother who toiled long hours at the local hospital to support her two children and enable their intellectual growth. She also celebrates her extended family, the grandmother she adored and the many aunts, uncles, and cousins who played important roles in her early development.

She dwells on her educational experiences at Catholic schools, where discipline was strongly enforced and where rote learning was highly valued. She got excellent grades, but she never was taught to think outside the box until she joined the debate team. There, she had to imagine arguments from all possible sides and to learn to think on her feet, aptitudes that later would serve her well in her chosen profession.

Judge Sotomayor’s next step was Princeton University. Her account of her naivete and her unpreparedness for the cultural subtleties of an Ivy League school are amazing to me. Things I took for granted when I went to college were absolutely unforeseen by a young student of Puerto Rican heritage. Still, she graduated summa cum laude (an honor she didn’t know existed until someone explained), and then moved on to law school at Yale. There, too, she found herself navigating a strange new world, but one supported by new colleagues with common goals. In fact, she makes a point of touting and praising the value of her friendships.

The final chapters of My Beloved World take Judge Sotomayor into the legal profession, first in the New York district attorney’s office and later when she joined the law firm of Pavia & Harcourt. Reading those anecdotes reminded me of why I never wanted to be an attorney, but I found her observations priceless. She notes, for example, that Princeton and Yale taught her to reason logically and dispassionately, to ignore human and humane costs of legal hair-splitting. When she was confronted, however, with difficult real-life cases, she began to realize how the law affects not just the accused but whole families. Here is where her life experiences come into play. Because she grew up in the projects, she understands problematic circumstances in ways that other judges may not perceive.

Judge Sotomayor wrote My Beloved World for aspirational readers, especially addressing children of immigrants who aspire to higher education and professional careers. She takes great care in describing her learning processes and analyzing what steps she took to succeed. The debate team, her membership in Puerto Rican advocacy groups, her work advancing minority representation at every level of her career. She even expresses her lifelong struggles with Type I diabetes inspiring youngsters with health problems that may seem overwhelming.

I read My Beloved World while our fractured political world is debating who the next Supreme Court associate justice will be. The news headlines blare the sorts of blatant remarks that Judge Sotomayor confronted throughout her career. As her memoir makes clear, however, she deftly dodged the racism and misogyny. She kept her eye on the prize instead. Her memoir is a primer for those who follow. It is also an intellectual tour de force, a blueprint for the ways a quality education opens doors and opportunities alike. – Ann Ronald 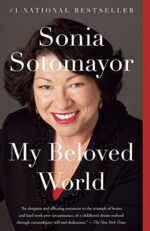 Ann Ronald is a retired English professor from the University of Nevada, Reno. Author of dozens of reviews, she’s also written a number of books about the American West. They include literary studies such as The New West of Edward Abby and Reader of the Purple Sage, cultural studies such as GhostWest and Oh, Give Me a Home, and nature writing such as Earthtones: A Nevada Album. Her latest is a work of fiction, Friendly Fallout 1953. Since retiring, she’s been reading vociferously, so “Bookin’ With Sunny” is giving her a wonderful opportunity to share thoughts about her favorite new discoveries.
More from this reviewer
PrevAnthill
The Last Mona LisaNext