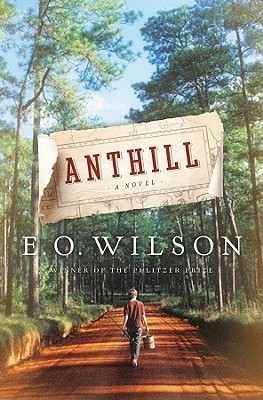 Anthill – The late Edward O. Wilson’s novel look at myrmecology from the Florida panhandle to Mobile, Alabama, fiction as well as fascinating taxonomy.

Noted biologist and naturalist E. O. Wilson wrote one book he called a novel. I agree that Anthill is fiction, but I would characterize it as a taxonomy rather than a novel in the literary sense of the word. In its pages, Wilson sorts and classifies, studies, and analyzes, a segment of the Old South that stretches along the Florida panhandle to Mobile, Alabama. His taxonomy includes uncut old-growth longleaf pine, the flora and fauna, the people who live there, and most of all, the ants native to the region. Best known for his work as a myrmecologist (someone who studies ants), Wilson uses his scientific specialty to draw parallels between the species of his chosen terrain, their behaviors, and their evolution.

Wilson’s central character is Raphael Semmes Cody, a remarkable boy/naturalist when the reader first meets him, and an even more remarkable young lawyer when environmental issues dictate the end of Antill. Raff’s own taxonomy is distinctly Southern. His father is almost a redneck caricature—a rifle-toting, heavy-drinking, hard-working, flirtatious man. His mother comes from an old Southern pre-Civil War family that relishes their family name and their storied past. Wilson spends nearly a quarter of Anthill tracing Raff’s parents’ ancestry, their mores, and their ancestral codes.

He also details how Raff fits into the family patterns and where his personality digresses. An important part of Raff’s persona is his fascination with Nokobee County, a relatively untrammeled section of land that the boy dearly loves. He spends time hiking its footpaths and studying its inhabitants (much like, I gather, E. O. Wilson did in the same kind of landscape when he was a boy). Raff frets, though, that the Nokobee will one day be developed and that its pristine scenery will be replaced by tract homes and strip malls. This drives the choices Raff makes throughout Anthill—the decision to study Nokobee ants as his Eagle Scout project, the decision to attend Florida State University and study biology (and to write his Honors thesis on Nokobee ants), his decision to study law at Harvard, his decision to take a position as the staff lawyer for a successfully voracious development firm in southern Alabama.

Anthilll’s middle section is a taxonomy of ants. It replicates Raff’s honors thesis, scientifically studying a series of anthills at the start of a Nokobee trail. Raff observes them carefully, watches their reproductive rituals, their hierarchies, their interactions, their lives, and their deaths. Wilson implies, often, that ant behavior mimics human behavior; or vice versa. Both are social and hierarchical, both are dependent upon available natural resources, both are notoriously aggressive when encountering opposition, both encounter life cycles that ultimately dictate their behavior. Raff’s two college experiences, in Florida and again in Boston, follow the same pattern of taxonomical analysis, examining how he fits into each milieu, how he finds his particular role (and makes the best of it).

Finally, the last few chapters of Anthill take Raff back to Mobile and plunge him into various species of human beings. These include the corporate entities he works with every day, the environmental activists he joins in his off hours, an environmental reporter who is also a close friend and, most significantly, evangelical Bible-thumpers who have strong feelings about human dominion versus conservation in the New South. In the context of recent Supreme Court decisions, I found the biblical taxonomy particularly fascinating. The denouement of Anthill is intriguing, too, as Wilson ever so smoothly brings his taxonomies together, layering their resemblances and their similar fates. – Ann Ronald

In sum, Anthill is quite a remarkable book, quite a stunning taxonomy.  Just not a novel, in my opinion.

Also available by E. O. Wilson: On Human Nature; The Diversity of Life; The Meaning of Human Existence; The Social Conquest of Earth; The Future of Life; Letters to a Young Scientist; Half-Earth, Our Planet’s Fight for Life; The Ants; Biophilia; Conscience, The Unity of Knowledge; Sociobiology, The New Synthesis; Biodiversity; Journey to the Ants; Genesis, The Deep Origin of Societies; The Super Organism (with Bert Holldobler); Tales From the Ant World; Naturalist; A Window on Eternity; Ants and Men;  Forwards by Wilson: The Literary Anima; For Love of Insects; and The Theory of Island Biogeography. 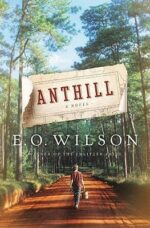 Ann Ronald is a retired English professor from the University of Nevada, Reno. Author of dozens of reviews, she’s also written a number of books about the American West. They include literary studies such as The New West of Edward Abby and Reader of the Purple Sage, cultural studies such as GhostWest and Oh, Give Me a Home, and nature writing such as Earthtones: A Nevada Album. Her latest is a work of fiction, Friendly Fallout 1953. Since retiring, she’s been reading vociferously, so “Bookin’ With Sunny” is giving her a wonderful opportunity to share thoughts about her favorite new discoveries.
More from this reviewer
PrevAfrica, Amazing Africa, Country by Country
My Beloved WorldNext