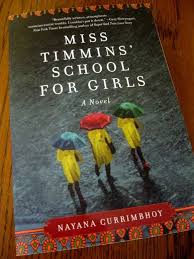 Miss Timmins’ School for Girls braces ongoing colonialism against intrusive modernity in surprisingly innovative ways. Set in late twentieth-century India, the novel takes place at a boarding school for girls, where wealthy Indian girls supposedly are learning the niceties of English literature, language, and lore. Surrounded by archaic rules and regulations, the members of this isolated school-girl community are struggling to grow up, not an easy task in a circumscribed world that is rocked by gossip and scandal. Nayana Currimbhoy tells the story through two voices: Charu, a teacher at Miss Timmins’ School for Girls, and Nandita, a student. Each of them comes of age as this novel progresses, although in quite unexpected ways.

Charu comes from an upper class Brahmin background that has somehow been tainted. Symbolically, she is marked by an unsightly red blot on her face. By going to Miss Timmins’ School, she is fleeing both her heritage and herself. Once there, she experiences ecstasy and despair, trauma and introspection, all while undergoing some startling personal changes. In her persona alone, colonialism collides with modernity. The reader knows Nandita less intimately. Smart, a good student, well-respected, innately curious, Nandita offers a solid counterpoint to Charu’s more rhapsodic narrative. Only at the end of the novel does Nandita take on more weight and a more symbolic dimension.

The focal point of Miss Timmins’ School for Girls is a sudden death, when one of the major characters falls from a nearby cliff. Did she jump? Was she pushed? And if she was pushed, who is the murderer? Currimbhoy suggests many answers—red herrings, potential solutions, plausible possibilities, dead ends. She keeps the reader (and her two narrators) guessing, solving the mystery only on the final pages of a nearly five hundred page novel. Even then, she does so cryptically, embedding the apparent resolution in linguistic ambiguity.

I confess that I was fooled. As any regular reader of ‘Bookin’ with Sunny’ knows, I read a lot of mysteries and I thoroughly enjoy them. Part of the mystique is trying to out-think the author and his or her detective (amateur or professional), and I like to think I’m smart enough to follow the clues. Currimbhoy buries her clues in plain sight, setting up one protagonist after another, spinning credible sequences of events only to destroy that line of logic and begin following another. I loved the misdirections, the ploys, the innuendos. And this time, from the outset, I tracked the wrong story line and accused the wrong villain.

Besides adoring mysteries, I also relish books that stretch my comfort zone. Miss Timmins’ School for Girls is a provocative novel. It conveys a lot about contemporary India and how the notion of empire still overrides a population striving for independence. It does so on a small-scale, in a distant rural setting, but it does so in profound ways. The narrative also communicates the problems girls and women face in a fixed society, and how they might come of age in divergent and dynamic ways. Finally, the book is introspective, with deep dives into characterization and motivation. One character remarks in the prologue, “1974 was a forked tongue of a year, it spoke to me of murder and madness, and love and laughter in equal measure.” That sentence, especially with its ‘forked tongue’ imagery, well summarizes this excellent piece of writing. – Ann Ronald 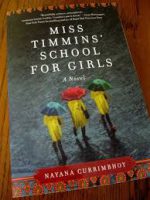 Ann Ronald is a retired English professor from the University of Nevada, Reno. Author of dozens of reviews, she’s also written a number of books about the American West. They include literary studies such as The New West of Edward Abby and Reader of the Purple Sage, cultural studies such as GhostWest and Oh, Give Me a Home, and nature writing such as Earthtones: A Nevada Album. Her latest is a work of fiction, Friendly Fallout 1953. Since retiring, she’s been reading vociferously, so “Bookin’ With Sunny” is giving her a wonderful opportunity to share thoughts about her favorite new discoveries.
More from this reviewer
PrevThe Wright Brothers
A Race to SplenderNext