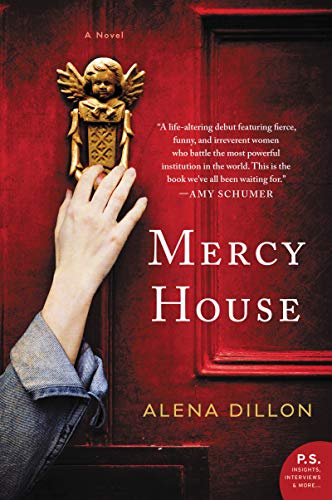 Alena Dillon’s novel, Mercy House, uniquely blends laughter with tragedy, pain with redemption. Its setting is a Bedford-Stuyvesant shelter for abused women. Run by three elderly nuns, Sisters of St. Joseph of Mercy, Mercy House accepts any female who knocks on the door. Pregnant teenagers, battered wives, street-smart women, and innocent incest victims alike, are welcomed at Mercy House and then nursed to good health both physically and mentally. Some of the residents are lippy and defiant; others, fearfully withdrawn. The reader learns the ordeals of each woman in occasional chapters that punctuate the Mercy House narrative line.

That narrative details a Mercy House crisis—Bishop Robert Hawkins has come to evaluate the sisters’ enterprise. His goal? To shut Mercy House down, permanently. His antagonist is Sister Evelyn. Sixty-nine years old and incredibly feisty, Evelyn is the bulwark of Mercy House. And she doesn’t plan to let the Hawk, as she calls the Catholic legate, succeed. The heart of Mercy House beats with the machinations of both Sister Evelyn and the Hawk as the two go back and forth with plots to save the franchise or to ruin it. The two other nuns and the five current residents are uneasily drawn into the fray, sometimes with hilarious results, sometimes with horrendous ones.

The reader learns of Sister Evelyn’s past, too, of her estrangement from her family and of her own damaged history—two reasons why she has poured her heart and soul into Mercy House. The residents, like family to her, move on with their lives before she can get too attached. Meanwhile, she is constantly atoning for her own youthful travails, caring for damaged young women with the loving attention she once needed herself.

It isn’t all tragedy and tears, however. Sometimes the chapters are downright side-splitting. The five residents can be insolent and blasphemous, and their antics to help their hostesses are heart-warming and fun. The reader sees them changing as the novel progresses, watches each one—the gang leader’s girl, the Chinese/Russian refuge, the mouthy prostitute, the Haitian immigrant, the taciturn recluse—gain more self-assurance and maturity. How the residents react to different ways the three nuns interact with them, draw them out, make them feel good about themselves, teach them to love, is part of the novel’s charm.

As well as the novel examines the plights of these young victims, it also scrutinizes Catholicism, especially Catholicism’s gendered double standard when treating sexual and sinful lapses. The parish priest and the Order’s Mother Superior get involved. Their actions, like so many of the characters’ deeds, sometimes unfold comically, sometimes obtusely, sometimes disastrously. I certainly was hoping the Hawk would fail, that Sister Evelyn would prevail, that the Church would do the right thing, but readers of “Bookin’ with Sunny” will have to read to find out. And as you read, you will find as I did, a curious blend of seriousness and playfulness, a light-hearted treatment of a very somber subject matter. Alena Dillon manages to pull both threads together in a novel that isn’t a beach book but isn’t particularly profound either. Mercy House is somewhere in between—delightfully in between.  – Ann Ronald

Also available by Alena Dillon: I Thought We Agreed to Pee in the Ocean. 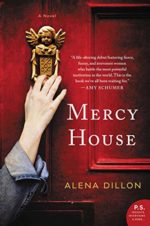 Ann Ronald is a retired English professor from the University of Nevada, Reno. Author of dozens of reviews, she’s also written a number of books about the American West. They include literary studies such as The New West of Edward Abby and Reader of the Purple Sage, cultural studies such as GhostWest and Oh, Give Me a Home, and nature writing such as Earthtones: A Nevada Album. Her latest is a work of fiction, Friendly Fallout 1953. Since retiring, she’s been reading vociferously, so “Bookin’ With Sunny” is giving her a wonderful opportunity to share thoughts about her favorite new discoveries.
More from this reviewer
PrevDog On It
Star of the NorthNext