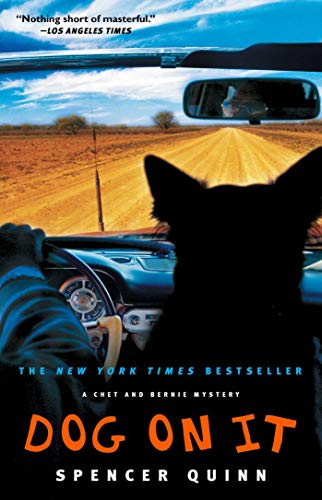 Please don’t wait for the dog days of summer to read Spencer Quinn’s Dog On It. Based on our present pandemic restrictions, summer as we know it may be a long way off.

On numerous occasions, I have no trouble passing on a book when its title is too darned cute, and its cover shouts, “Read me, I’m fun!”  It’s another case of not picking a book for its cover. I, however, picked Dog On It in spite of its cover, and am glad I did. Dog On It (the first in the Chet [the dog] and Bernie [the private eye] mysteries), and I can almost guarantee that readers, male or female, will love this crazy mutt and his private detective partner.

Dog On It opens with, “I could smell him – or rather the booze on his breath – before he even opened the door, but my sense of smell is pretty good, probably better than yours.”  Chet is a dog with heart and patience. He needs both as Bernie, still adjusting emotionally and financially to his recent divorce, is not having such a good time running his detective agency. Chet, an almost-graduate of the local K-9 police academy, loves detecting with Bernie, an ex-cop, and would like things to get back to the way they used to be before the divorce.

Bernie’s personality is known from Chet’s observations, as when Bernie, appalled that he is suddenly growing hair on his back, shouts out, “Why now. . . women hate back hair.” This puzzles Chet; from his own experience with “females of my kind,” he has “. . . had no problems with my physical appearance.”

What keeps this mystery from falling prey to its own cuteness is the seriousness of the writing. Think about this: exactly how do you write a who-done-it from a dog’s point of view? Chet is a dog, and Quinn avoids pretending otherwise. There are times in the story when Bernie must leave Chet behind, and at one point, poor Chet is dognapped. In the time he is gone, Chet, narrating his own dognapping has no idea what his partner is doing.

Dog On It is set in the west: there are deserts, Las Vegas housing, shady developers, bikers to avoid, canyons to drive around (but not off),  the Russian Mafia, drugs, a last-stop clinic for strays, a beloved Porsche in which Chet rides shotgun and, of course, a missing person for private detective Bernie Little to find. The missing person is a teenage girl who is missing, then found, and then seriously missing a second time. Runaway or kidnapping?

What keeps this mystery on track is the complexity of the plot, the sheer likability of both man and beast and, doggone it, the quality of the writing, which means the reader will buy into a dog as a narrator from page one.  Dog On It really is fun, and you will not be barking up the wrong tree if you choose to read it. – Sunny Solomon

Also available by Spencer Quinn (aka Peter Abrahams): Heart of Barkness; Ruff vs. Fluff; Down the Rabbit Hole; Woof; Thereby Hangs a Tail; Arf; Paw and Order; Behind the Curtain; Scents and Sensibility; A Fistful of Collars; The Dog Who Knew Too Much; A Cat Was Involved; Bow Wow; Paws and Claws; Of Mutts and Men; The Right Side; To Fetch a Thief; The Sound and the Furry; Santa 365;Tail of Vengeance; The Iggy Chronicles; End of a Story; A Perfect Crime; The Fan; Crying Wolf; The Tutor; The Outlaws of Sherwood Street; Reality Check; Revolution 9; Into the Dark; Lights Out; Oblivion; Last of the Dixie Heroes; Their Wildest Dreams; Hard Rain; Bullet Point; Tell Freedom, Memories of Africa; The Fury of Rachel Monette; Pressure Drop; Turning the Tide (and Sidney D. Kirkpatrick); Up All Night. 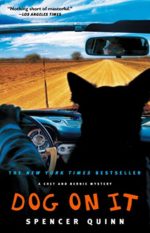 Sunny Solomon holds an MA in English/Creative Writing, San Francisco State University. She is a book reviewer for “The Clayton Pioneer” and her poetry and other writing has been published in literary journals, one chapbook, In the Company of Hope and the collection, Six Poets Sixty-six Poems. She was the happy manager of Bonanza Books, Clayton, CA and Clayton Books, Clayton, CA. She continues to moderate a thriving book club that survived the closure of the store from which it began. Sunny currently lives next to the Truckee in Reno, NV.
More from this reviewer
PrevAlways Home
Mercy HouseNext