Home » Reviews » Art » The Making of Some Like it Hot 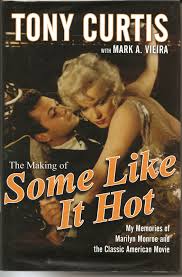 Billy Wilder’s 1959 comedy Some Like It Hot is listed as No. 14 of the hundred greatest movies and the No. 1 funniest movie of all time. These ratings were compiled by the American Film Institute. In its day Some Like It Hot challenged long-standing taboos on subject-matter by various censors. Forbidden subjects included cross-dressing, the main subject of the film, not to mention its gay subtext.

It seems like a lot of harmless fun today, but Some Like It Hot was difficult and often grueling to make. On the 50th anniversary of the film’s production, in The Making of Some Like it Hot, author Tony Curtis takes a look back at the part he played in its creation and those of his co-stars Jack Lemmon and Marilyn Monroe.

Monroe in particular is portrayed as a deeply troubled young woman grinding through an unhappy marriage to playwright Arthur Miller. The gorgeous star’s problems with alcohol and prescription drugs would eventually lead to her death in 1962. In Some Like It Hot, Monroe’s inability to focus caused Billy Wilder to shoot dozens of takes of even the simplest set-ups.

The Making of Some Like It Hot is a well-researched, finely detailed, and candid memoir. Much credit goes to Tony Curtis, who died in 2010, a year after the book was published, and to his co-author Mark A. Vieira. Curtis is most candid when he reveals a brief affair he had with Monroe, not only during the filming of Hot but also years earlier when they were both unknown actors just starting out.

Aside from gossip though, Curtis paints vivid portraits of each of the talented people who made the movie and his interactions with each. Chief among these are actor Jack Lemmon and writer-director Billy Wilder. Both are portrayed as brilliant and intuitive artists, not only when things are going well, but also during episodes of extraordinary pressure. On top of all that, during the filming of Hot, Curtis’ wife, Janet Leigh, was pregnant with their second child, future film star Jamie Lee Curtis.

On a personal note, I was a child living with my parents in San Diego when Some Like it Hot was being filmed at the Hotel Del Coronado. We were frequent visitors to the Coronado Central Beach for a splash in the surf around the time of filming. Somehow, I’ve always felt I was connected in a small way to this historic film. My senior prom was held at the Hotel Del Coronado years later. By the way, my parents had screened Hot first to check the adult content before letting me see it.

The Making of Some Like It Hot is lavishly illustrated with production stills, some of which are in color. These are especially revealing because the movie was shot in black and white. In 1959, color photography made women’s makeup look pretty unconvincing on the male stars. One poignant still shows Curtis’s parents, Hungarian immigrants Helen and Emmanuel Schwartz, visiting the set. Emmanuel died at age 58 just as shooting was being completed.

The Making of Some Like It Hot is extremely well-written and doesn’t waste words. I recommend it highly. The book is five years old and is especially moving now that the author and so many of his colleagues are no longer with us.   – Dan Erwine 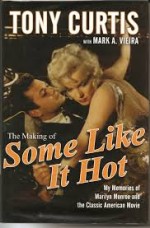 Dan Erwine holds a BS in Telecommunications, San Diego State University. Dan recently retired after four decades in radio broadcasting. His background San Diego stations KFSD and NPR's KPBS, and KUNR, Reno, NV. Over the years, Dan has produced and hosted a number of talk shows and interviewed over five thousand writers in almost every genre and career, from such notables as David Brin to Seamus Heaney, Allen Ginsberg, Judy Collins, Charlton Heston and Wally Schirra. Dan is a comic book aficionado and has a special interest in film, science fiction and mystery. He lives with his wife in Reno, NV.
More from this reviewer
PrevElephant Company
Taking the StandNext