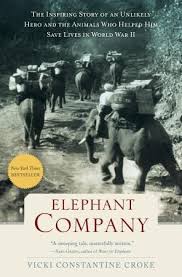 Elephant Company: The Inspiring Story of an Unlikely Hero and the Animals Who Helped Save Lives in World War II

What do Elephants really want? In 1920, James Howard Williams decided to find out. He was twenty-three, an age when most well-educated, socially secure, middle-class Englishmen might well think about settling down to a professional life or to a career of service to the Crown. Welcome to Elephant Company.

In Vicki Croke’s Elephant Company, we discover that Jim “Billy” Williams had other, less typical thoughts and dreams. Having served in and survived the Great War, Williams wanted more adventure, to be a part of the Empire, to nourish his inchoate spiritual longings, and to be with animals. He accepted a position with the British-owned Bombay Burmah Trading Corporation in Burma knowing important aspects of his life there would involve isolation from other Brits and resisting myriad tropical diseases. His success would largely depend upon his ability to learn Burmese, establish working relationships with Burmese elephant riders (“uzis”), and become an elephant wallah (elephant whisperer) and he would have to apply these skills in service to a profit-oriented teak company.

On arrival, he was provided with five elephants and their “uzis” for his personal use. They did not come with an instruction manual. Croke exquisitely recounts Williams’ hostile, drunken treatment by his boss who provided no practical help, only threats and seemingly unlimited whiskey. Williams learned quickly by reading, by detailed observations and by a keen intuitive analysis of animal behavior.

Williams and his boss had one thing in common: both were privileged Englishmen. Despite Williams’ junior status and unknown talents, he was sent into the jungle to manage a hundred elephants and their riders. His task was simple in concept: use the elephants to drag felled teak logs through the jungle so that they could be floated downriver for processing. Williams may have initially known next to nothing about Burma, Burmese, the Burmese people, or elephants, but he was the unquestioned boss over his jungle and forest domain. He had servants and elephants for personal use, an ample salary, medicines, firearms, imported foods, and a bottle of whiskey per day. He was part of Britain’s colonial elite. Williams and his boss had one other thing in common although it took several years for them to become aware of it. Both loved and understood elephants. Hence, Elephant Company refers to elephant society, human-elephant interactions, and elephants’ economic utility.

Williams’s high regard for elephants soon encompassed nearly all of the Burmese jungle’s fauna including the native peoples. After beginning his career in Burma, learning to kill animals for sport and sending their hides off for mounting, he eventually applied his empathic connection with elephants to other jungle animals, too. Early on, he had to shoot a rogue elephant. It was the first and last one. Afterward, he vowed to let the animals teach him how to treat them so as to avoid unnecessary killing. He learned well, illustrated by his subsequent meeting with a large trophy-sized tiger. Both survived. Along the way, he became a practical animal veterinarian of extraordinary skill and courage.

Within a decade of his arrival, Williams was acknowledged as an Elephant wallah both by the Burmese and his teak company bosses. He had established an elephant academy which changed how elephants were recruited, domesticated, and trained. He had become best friends with Bandoola, an immense male elephant born in the same year as himself (1897). Each saved the other’s life on more than one occasion. How Williams saved Bandoola’s is a story that one perhaps shouldn’t tell at the dinner table, a story that Croke relates with glee.

Both Williams (known then as Elephant Billy) and Bandoola became famous during World War II. Their relationship connects much of the narrative. In telling their story, deeply researched and charmingly presented, Vicki Croke’s love of animals and those who share her passion shines through.

Also available by Vicki Croke: The Modern Ark: The Story of Zoos, Past, Present & Future; The Lady and the Panda; Animal ER; Dogology: What Your Relationship with Your Dog Reveals about You; Cats up close; Dogs up close. 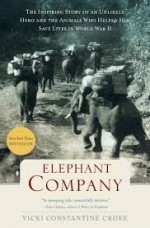 Neal Ferguson is a self described Anglo-phile. After studying for a PhD in British history and doing research for a year in various British archives, he came to the University of Nevada in 1970 to teach. Soon he found himself in administration where he remained until 2003. After returning to full-time teaching a decade ago, he decided to concentrate his teaching energies on Medieval British history and various global aspects of World War II. Dedicated to Ambrose Bierce’s proclamation that the purpose of war is to teach Americans geography, Neal insists that his students accompany him (in class) to sundry east European rivers and steppes, African deserts and jungles, south-east Asian mountain ranges and peninsulas, and small islands and coral reefs in the Pacific. Currently he is writing a book about the ups and downs of General Douglas MacArthur’s military reputation.
More from this reviewer
PrevNames on a Map
The Making of Some Like it HotNext