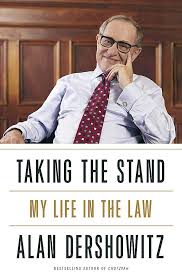 Taking the Stand: My Life in the Law

Despite his occasional demurs, Dershowitz is a celebrity lawyer who relishes the attendant fame, media venues and bank account. These slight caveats in no way lessen his brilliance and importance. He was a Harvard law professor for fifty years. He has written thirty books. He has influenced some high-profile constitutional issues: free speech, capital punishment, and gun control. He has publicly defended most of Israel’s actions and policies during the past four decades—with some crucial exceptions. He has taken on many media-grabbing cases, some pro bono. He neither claims nor advocates humility. He does not hesitate to take a stand in Taking the Stand.

Dershowitz may be unapologetic about his controversial career, but he is capable of self-reflection. For instance, there is almost nothing about the first eighteen years of his life to suggest he would rise very far out of his Brooklyn neighborhood. His parents seemed not to encourage him to do or be anything in particular, with two notable exceptions. His mother insisted that he be an observant Orthodox Jew. His father advocated the defense of underdogs as a Jewish responsibility. In the Jewish schools he attended, he was a near failure, refusing to learn by rote memorization and exercising his tendency to challenge authority (at least that of teachers). While an undergraduate at Brooklyn College, he discovered his intellectual talents. From that point, his trajectory steepened astonishingly. In Taking the Stand, Dershowitz often adopts a kind of “gee whiz—who knew” wonderment about his ascent from low expectations to recognition and brilliance. Dershowitz wants his readers to know that he has hit a home run during his life and that he didn’t start at third base.

His wonderment appears to be genuine. When he undertook to defend Hustler magazine, he did so out of regard for the underdog and his relatively absolutist belief in free speech. At the time, Dershowitz was a professor at Harvard Law. Those professors did not practice law; they analyzed, theorized and wrote about it. He bowed slightly in the direction of their sensitivities by taking the case pro bono. He was publicly reviled for defending Flint’s salacious magazine, but Dershowitz maintained then and continues to maintain that freedom of speech means little if we defend only those forms and contents of speech that we agree with. Public hysteria, in his view, produces the conditions under which speech needs to be protected. For this reason, he observes the first victim of war is often freedom of speech as patriots close ranks against any and all dissenters. Later, perhaps to show that he was serious, he defended the right of neo-Nazis to celebrate their hate-filled spew while marching publicly in Skokie, Illinois. Nor is Dershowitz the friend of various forms of PC practiced on many American university campuses. He manages to antagonize puritans of all shades.

After the Hustler case, Dershowitz never looked aback, his law colleagues’ disapproval notwithstanding. At some point, he began to accept celebrity-rich cases because of the notoriety, because of his affection for center stage, and because of the money. At the same time, he consciously decided to restrict his academic legal writing in favor of writing popular legal books promoting both his career and legal causes. It has been a successful strategy for him. It has also provided the opportunity for Americans to learn something about our legal system and those freedoms we claim to hold so fervently, except when inconvenient.

Taking the Stand is autobiographical and sometimes insightful. It does not simply rehash the cases that have been the detailed subject of his many other books. Written with dash and clarity, Dershowtiz’s Taking the Stand manages to achieve both entertainment and education. One day, he’ll be the subject of worthwhile biography. – Neal Ferguson

Also available by Dershowitz: The Case for Israel; Three Felonies A Day: How the Feds Target the Innocent (with Harvey Silvergate); The Case Against Israel’s Enemies; The Case for Peace; The Case for Moral Clarity: Israel, Hamas and Gaza; Letters to a Young Lawyer; I am Jewish; Frights from Wrongs; The Best Defense; The Genesis of Justice; America on Trial; Fall from Grace: The Untold Story of Michael Milken; Blasphemy; Preemption; Reasonable Doubts; Supreme Justice; Abuse Excuse; Is There a Right to Remain Silent?; Chutzpah; Reversal of Fortune: Inside the Von Bulow Case; What Israel Means to Me; Just Revenge; Finding Jefferson; America Declares Independence; Reasonable Doubts; The Vanishing American Jew; The Trials of Zion; Contrary to Popular Opinion; Why Terrorism Works; Shouting Fire; Sexual McCarthyism; Trials of the Century; Taking Liberities; Best of Alan Dershowitz. 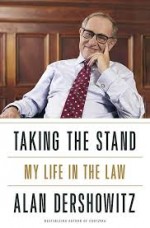 Neal Ferguson is a self described Anglo-phile. After studying for a PhD in British history and doing research for a year in various British archives, he came to the University of Nevada in 1970 to teach. Soon he found himself in administration where he remained until 2003. After returning to full-time teaching a decade ago, he decided to concentrate his teaching energies on Medieval British history and various global aspects of World War II. Dedicated to Ambrose Bierce’s proclamation that the purpose of war is to teach Americans geography, Neal insists that his students accompany him (in class) to sundry east European rivers and steppes, African deserts and jungles, south-east Asian mountain ranges and peninsulas, and small islands and coral reefs in the Pacific. Currently he is writing a book about the ups and downs of General Douglas MacArthur’s military reputation.
More from this reviewer
PrevThe Making of Some Like it Hot
Two Boys Kissing Reviewed by Ann RonaldNext