Home » Reviews » History » My Life as a Foreign Country

My Life as a Foreign Country 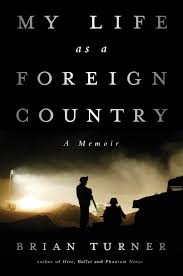 My Life as a Foreign Country takes us into the nightmare terrain of war. Focusing on Iraq during a 2003 tour of duty, Brian Turner’s memoir also navigates a series of other wars: Antietam, World War II as endured by his grandfather, his father’s Cold War recollections, an uncle’s time in Vietnam. After his Iraq deployment, Turner visits places like Nagasaki and Saigon, walks in the footsteps of his predecessors, returns to scenes from his own earlier service in Sarajevo, and relives scenes he can’t forget. The endless repetitions of violence and humanity, the juxtapositions of atrocities and kindnesses, the pulses of horror and beauty, sound a drum beat in the readers’ ears, the human costs for both soldiers and civilians, the graphic realities confronting everyone involved. I found myself shivering as I read Turner’s words.

This is not a memoir for the faint of heart. Turner looks at war and never blinks, never sugarcoats his experiences but never indulges in self-pity, either. He serves as a narrative lens, the eye of a camera capturing both real and imaged scenes.  Sometimes objective and sometimes subjective, he leaves room for the reader to evaluate what relentlessly occurs. Turner opens and closes My Life as a Foreign Country with images of the narrator as a drone, traversing the landscape, memorizing the topography, zooming in on hypothetical action, recalling actual events, checking the gauges, monitoring the skies. In between those dream-like flights, Turner recounts his personal experiences of war in language taken from his journals and the poems he drafted in Iraq, experiences then suffered in his memories, time and again.

Turner explains: “In many ways, the language of journal entries and poetry forged an internal space within me, a space that didn’t belong to the army or to the community of soldiers I served with.  Sgt. Turner was too small of a space for a human being to live in.” His journals and his poems allowed him to keep his sanity in a time of psychotic chaos. I could cite countless examples of combat and its aftermath, both physical and psychological, but I was especially moved by the suicide of one man from Turner’s platoon. After Pvt. Miller puts the muzzle of his automatic weapon in his mouth and pulls the trigger, Sgt. Turner and a buddy are tasked to collect the private’s personal effects. Later that night, Sgt. Turner imagines Pvt. Miller’s mother hearing the ring of her doorbell, “too shrill, I think, too bright,” taking that duffel from somber men in dark coats and opening the memories that remain of her son. Elsewhere, and just as powerfully, the author recalls a moment when he himself was nearly killed. “Sgt. Turner is dead,” he metaphorically observes. “I was there when it happened.” Such is the fate, both literally and figuratively, of so many soldiers and civilians the reader meets in My Life as a Foreign Country.

Turner voluntarily enlisted in the infantry. “To be a man,” he explains, “I would need to walk into the thunder and hail of a world stripped of its reason, just as others in my family had done before me.” As someone who came of age during the height of the Vietnam War, I find his rationale difficult. At the same time, I found his understated indictment of war more honest and more persuasive than most.  Just today, more than a decade after Brian Turner’s time in Iraq, the president of the United States announced the deployment of even more troops to that distant country. He, and every congressman and senator who supports a military agenda, needs to read My Life as a Foreign Country.   – Ann Ronald 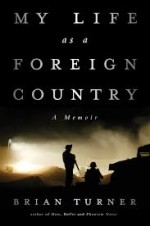 Ann Ronald is a retired English professor from the University of Nevada, Reno. Author of dozens of reviews, she’s also written a number of books about the American West. They include literary studies such as The New West of Edward Abby and Reader of the Purple Sage, cultural studies such as GhostWest and Oh, Give Me a Home, and nature writing such as Earthtones: A Nevada Album. Her latest is a work of fiction, Friendly Fallout 1953. Since retiring, she’s been reading vociferously, so “Bookin’ With Sunny” is giving her a wonderful opportunity to share thoughts about her favorite new discoveries.
More from this reviewer
PrevNo Passengers Beyond This Point
Doc, A NovelNext