Home » Reviews » No Passengers Beyond This Point

No Passengers Beyond This Point

Reviewing books written for readers between the ages of ten and fourteen always leave me feeling a bit like a duck out of water. Middle-reader books are the only ones whose reviews I check out before writing my own. It’s not cheating. I just want to know how far from the pond I’ve traveled.

I loved this book. Quirky is a word used by several reviewers to describe the story. Most reviewers thought it good, but somewhat uneven and not always an easy read. Choldenko, a Newbery Honor winning author, steps away from history and rather handily takes on a touch of fantasy which begins and ends in reality.

At the beginning, three California children, India, a typical, hormone-driven, fourteen-year-old, Finn, the twelve-year-old middle male sibling who worries about everything and attempts the role of peacemaker, and Mouse, the brainy and inventive six-year-old who keeps company with Bing, her imaginary friend, are told by their mother that their home has gone into foreclosure and will be sold immediately. Her announcement is followed by the news that they will be sent to live with their bachelor uncle in Colorado. Their mother, a widowed school teacher, gives them twenty-four hours to prepare for their flight to Denver. They are to travel alone, she will follow at the end of the school year. Since their father’s recent death, each child lives with their own sense of loss. The growing emotional distance between them, including their mother, is exacerbated with the news of foreclosure.

Choldenko writes the story from the alternating points of view of the three siblings. India, pretty, insecure and hormonally ripe is at odds with every member of her family, especially her mother. Twelve-year-old Finn, missing his deceased dad, treks his way through his own prepubescent no-man’s land, while Mouse turns to her brain and Bing to make sense of the news. Readers of all ages will feel an immediate sympathetic connection to the Tompkins family.

The plane takes off, but no more than one hour into their flight, they encounter tremendous air turbulence resulting in a mysterious landing. They exit the plane alone with no sign of any other passengers. The airport appears to be abandoned. For those older readers, we don’t need to hear Dorothy tell Toto, “We’re not in Kansas anymore.” We know they are definitely not in Denver.

Instead of being met by Uncle Red, the children are picked up and driven to a place called Fallen Bird. The cab driver is a boy himself, but disguised with phony mustache and sideburns. Fallen Bird is an Eden for each child. The perfect house for each of them. India even gets the “perfect” mother. Finn is offered a male support system only dreamed of. But it is Mouse who is the first to figure out something is not quite right. Bing, of course, is her voice of reason.

What I like best about this story is that Choldenko moves the point of view from child to child without a hitch. Each chapter is identified by the child’s name and then the name of the chapter. Fallen Bird is a fantastical landscape of every kid’s wishes, but the wishes come with a price and it is a price each child must come to terms with. Time is of the essence in Fallen Bird and each child has their own time constrains within which they must make critical decisions about the life they choose to live. There are twists and turns keeping both readers and characters on their toes. They must answer some very tough questions: Do they really want to leave Fallen Bird?; Do they want to somehow find their uncle, a man they barely remember?; and How important is their relationship to each other? No easy answers here, and exactly where is “here?”

I’m not sure what young readers might think about what has really happened to the plane or exactly where they think the Tompkins kids landed. But for us older readers, the possibilities are almost endless. It couldn’t have been a dream, could it? Three people can’t have the same dream at the same time, can they? More dire possibilities also exist.

I’m going to hold on to my advance review copy of No Passengers Beyond this Point so when my  grandchildren are a couple of years older I can read it to them. This is a book that should be read out loud, especially in a family with at least a couple of kids. The siblings in the story can be maddeningly selfish, foolish, clueless, but they’re only kids. Another likeable aspect of the story is that it begins in reality, then with the rough weather, free-falls into something not quite real, and then ends with a fall back into reality. A reality that is somewhat difficult and actually sad, but authentically hopeful as well.  – Sunny Solomon

Also available by Gennifer Choldenko: Al Capone Does My Shirts; Al Capone Does My Homework; If a Tree Falls at Lunch Break; Notes From a Liar and Her Dog; Louder Lill; A Giant Crush; How to Make Friends with a Giant; Moonstruck; Putting the Monkeys to Bed. 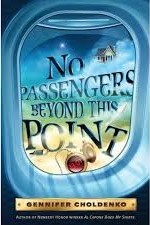 Sunny Solomon holds an MA in English/Creative Writing, San Francisco State University. She is a book reviewer for “The Clayton Pioneer” and her poetry and other writing has been published in literary journals, one chapbook, In the Company of Hope and the collection, Six Poets Sixty-six Poems. She was the happy manager of Bonanza Books, Clayton, CA and Clayton Books, Clayton, CA. She continues to moderate a thriving book club that survived the closure of the store from which it began. Sunny currently lives next to the Truckee in Reno, NV.
More from this reviewer
PrevThe High Divide
My Life as a Foreign CountryNext