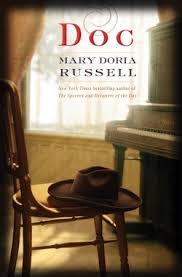 John Henry “Doc” Holliday: Southern landed gentry, classical pianist, consumptive, classicist, dentist, gambler, alcoholic, loyal friend, detective, and horseman.  In Russell’s fictional version, Doc Holliday is many things but he is not a gunslinger.  She ends the story on the eve of him and the Earp brothers leaving Dodge City, Kansas in 1879 and heading off to Tombstone, Arizona Territory, the O.K .Corral, and history.  Personally, I would like to have read her interpretation of the thirty-second shoot-out at the famous corral.  She wrote the book she wanted to write, however, not the one I would have preferred.  That’s as it should be.  Will she write a sequel?

Still, the story Russell tells, solid historical fiction, is compelling even without the myth-making O.K. Corral climax.  Doc Holiday is the main character, but there are other real historical persons of interest in the novel.  Russell digs into them with relish and some apt imagination.  They come alive. There is Kate, the working whore who prodded Doc to leave Texas for Dodge.  She is not exactly the whore with a heart of gold, but gold figures prominently in her daily calculations.  Nor is she the antiseptic “Miss Kitty” of Gunsmoke fame.  Kate is a fully sexualized being who plies her trade while living with and loving Doc.  Then there are the Earp brothers whom Doc befriends.  James and his wife, a former hooker, run a brothel in Dodge City.  Wyatt is a puritanically inclined some-time deputy marshal, sometime faro dealer, who insists on enforcing the law equally against the rich and the poor, the powerful and the feckless.  Morgan is something of kindred spirit to Doc, sharing Doc’s passion for ideas, culture, and good books if on a slightly lower evolutionary plane.  A delightful character is Alexander von Angensperg a Jesuit from Wichita.  Austrian and well-educated—typical of the Jesuits—Father Angensperg also provides some cultural and spiritual nourishment to Doc as well as being a source of helpful information about the murder victim.  Incidentally, in this story Father Angensperg helped found Wichita’s St. Francis hospital, my birthplace.

Did I mention that this novel also contains a murder mystery?  A young, talented black man is found dead in the smoking remains of a Dodge City livery stable.  His death is ruled accidental, but over time Doc and Morgan Earp begin to think otherwise. The murder’s discovery and solution provide Russell with a slender thread to cinch-up the welter of tangled events and themes. Even so the novel is more character than plot driven.

As a result, Russell’s novel appears headed towards chaos at times. There is so much energy being flung-off around Dodge City.  The restless, repressed cowboys arrive regularly to hand-off their trail herds of cattle to the railroads.  There are deputies nervously forcing the cowboys to check their shootin’ irons at the city limits.  Boot Hill provides mute but graphic testimony to Dodge City’s culture of casual blood sports. Ironically, the town’s business plan is “don’t kill the customers.”  Gambling, drinking, whoring, brawling, and laudanum are taken for granted although the nascent prohibition campaign is beginning to have an effect.  Dodge City’s rambunctiousness—chaos moving incrementally towards entropy—is a minor theme that Russell deftly weaves into Doc.

Doc Holliday is a prime example of Dodge City’s trajectory—arcing towards entropy(death).  Doc is so many things, mostly good, some bad, but always in the background is his tuberculosis and the inevitability of his foreshortened life.  He is never maudlin about his malady.  Instead, Doc seizes days, hours, and minutes in a frenzied attempt to cram a full life into a half one.  In so doing he drinks too much, eats too little, and burns his candles at both ends and in the middle.  Still, Doc’s journey as a Southern boy who happens to be a race-blind, chivalric knight-errant, however entertaining, is a bit unconvincing to me, a Kansas abolitionist.  This novel is a worthy successor to her A Thread of Grace.   – Neal Ferguson

Also available by Mary Doria Russell: Epitaph (coming in 2015, which should make Neal Ferguson a happy reviewer); Dreamers of the Day, A Thread of Grace; Children of God; The Sparrow.  – Solomon 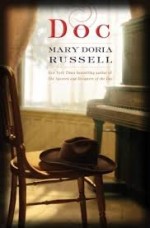 Neal Ferguson is a self described Anglo-phile. After studying for a PhD in British history and doing research for a year in various British archives, he came to the University of Nevada in 1970 to teach. Soon he found himself in administration where he remained until 2003. After returning to full-time teaching a decade ago, he decided to concentrate his teaching energies on Medieval British history and various global aspects of World War II. Dedicated to Ambrose Bierce’s proclamation that the purpose of war is to teach Americans geography, Neal insists that his students accompany him (in class) to sundry east European rivers and steppes, African deserts and jungles, south-east Asian mountain ranges and peninsulas, and small islands and coral reefs in the Pacific. Currently he is writing a book about the ups and downs of General Douglas MacArthur’s military reputation.
More from this reviewer
PrevMy Life as a Foreign Country
Dorothy L. Sayers The Complete StoriesNext