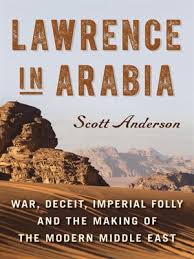 Lawrence in Arabia: War, Deceit, Imperial Folly and the Making of the Modern Middle East

“We [the young men who won the war] stammered that we had worked for a new heaven and a new earth, and they [the old men] thanked us kindly and made their peace.”   – T. E. Lawrence

King size disillusionment. These words aside, Lieutenant Colonel Thomas Edward Lawrence displayed his disillusionment more dramatically on a public occasion in 1918. His words above came at a later time, part of his famous memoir The Seven Pillars of Wisdom, 1922, some four years after the Great War’s end. You remember World War I: Armageddon, the war to make the world safe for democracy, the war to end all wars. His public display happened on October 31, 1918, when the thirty-year old colonel, already famous but not yet notorious, entered Buckingham Palace to receive a knighthood, specifically the Knight Commander of the British Empire, from HRH King George V. The Queen was there, so too were numerous high-ranking politicians and military officials. When just a lad, T. E. Lawrence had told one of his mates that his ambition was to be awarded a knighthood by the time he was thirty. Ambition achieved! Not quite. During the ceremony T. E. Lawrence refused the award and stalked out of the hall, presumably with back stiff and head held high. This was neither the first nor the last time Lawrence said no (Hell, no!) to power.

This story appears early in Scott Anderson’s Lawrence in Arabia and sets the tone for what is to come. The questions that Anderson attempts to answer about Lawrence revolve around “what made T.E. tick?” and “how did he achieve what he did given that he repeatedly stuck his thumb in the eye of authority?”
A brief synopsis of what he did. He stopped growing at about 5 foot 2 inches but had a charismatic personality (along with atmospheric blue eyes) that made him seem to be about 6-6. He graduated near the top of his class from Oxford University, a first class degree in history. Somewhat by chance he became an expert traveler, castle historian, archeologist, linguist, and cartographer in the Middle East, then the southern reaches of the decaying Ottoman Empire.

On an afternoon in late 1914, having absolutely no previous military experience, Lawrence was commissioned a 2nd Lt. He correctly identified the military strategy that would have, if not for Winston Churchill and the French, knocked Turkey out of WW I early on and protected the Suez Canal. On behalf of Arab nationalism, and in support of British strategic interests, Lawrence, dressed as a Bedouin and riding a camel, led one of the most successful guerrilla operations in the history of warfare. At the Paris Peace Conference in 1919 he expressed his dismay at the agreements that undercut Arabic dreams. And, he said NO! to King George V. So instead of becoming Colonel Sir Thomas Edward Lawrence, KCBE, he soon became T. E. Lawrence—Lawrence of Arabia.

Anderson’s book, however, is about Lawrence in Arabia. This is not a biography. It is about a talented man who found himself in the right place and at the right time to apply those talents. Although Anderson concentrates, and rightly so, on T. E. Lawrence, he expertly and interestingly layers Lawrence’s story in the Middle East with the stories of three other young men of American, German, and Palestinian Jewish/Romanian backgrounds. Respectively, they are William Yale, Curt Prüfer, and Aaron Aaronsohn. As Anderson builds up the layers of multiple biographies he also gives us a fascinating view (if narrowly focused) of the roles these incredible young men play in the muddle that becomes the modern Middle East. Anderson’s storytelling method is the reverse of the one employed by archaeologists. Archeologists dig from the top down; Anderson digs from the bottom up. The story so constructed and presented, as suggested by the book’s subtitle, is not pretty but is convincing.

Over and again, Anderson’s narrative reminded me of the disillusioned, disappointed, and cynical sentiments of T. E. Lawrence that I began this review with. Great powers attempt to mold the world in their own image applying their own interests. The leaders of great powers, as psychologists often remind us, tend to see the world as they experienced it at around age twenty, usually about forty years out of date. Often the results are as deplorable as they were in the Middle East. Would the Middle East have been a safer, more peaceful place if T. E. Lawrence’s vision had been enacted in the decade following the end of the Great War? Sadly, we can’t play it again to find out.                                  – Neal Ferguson

Also available by Scott Anderson: The Man Who Tried to Save the World; Moonlight Hotel; Triage; The 4 O’clock Murders.

Neal Ferguson is a self described Anglo-phile. After studying for a PhD in British history and doing research for a year in various British archives, he came to the University of Nevada in 1970 to teach. Soon he found himself in administration where he remained until 2003. After returning to full-time teaching a decade ago, he decided to concentrate his teaching energies on Medieval British history and various global aspects of World War II. Dedicated to Ambrose Bierce’s proclamation that the purpose of war is to teach Americans geography, Neal insists that his students accompany him (in class) to sundry east European rivers and steppes, African deserts and jungles, south-east Asian mountain ranges and peninsulas, and small islands and coral reefs in the Pacific. Currently he is writing a book about the ups and downs of General Douglas MacArthur’s military reputation.
More from this reviewer
PrevGrind
Engineers of VictoryNext