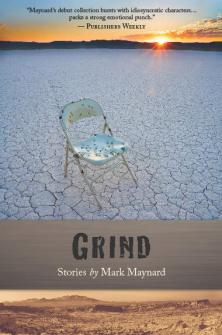 The eight short stories in Mark Maynard’s collection, Grind, all take place in Reno, Nevada; not the Reno where I live but the other Reno, the derelict one of drifters and human detritus. A Prologue introduces the grim setting. “This town will wear you down from the outside until all that remains is dust. Reno has always been a place where rough men and women have been able to find work in good times and trouble has been able to find them in bad ones.” I know this other Reno exists; I generally avert my eyes. Mark Maynard, however, doesn’t let me get away with that. In the pages of Grind, he depicts a nether world I’ve only glimpsed before.

Each story centers on someone whose life is in flux and whose fortunes are about to turn. For one reason or another, the main character is teetering psychologically, if not physically, close to a precipice. In the first one, the reader meets Tim Kelleher, a down-and-out panhandler who inserts his breakfast dollars into a slot machine, and strikes it rich. Next we watch a pilot flying in the Reno Air Races, a man egged on by his benefactor to push an ancient airplane faster and faster and faster. “Around the Bend” portrays an elderly man beset by Alzheimer’s, while “Letdown” exposes a grieving mother’s tears. “Deadheading” follows a semi-retarded trucker on down the road. “Steep” unveils a crew of ski bums, horrified by the thought that their local mountain might be turned into a destination resort, plotting how to avert what they see as impending disaster. Next we find ourselves in a Reno pawn shop, listening to recollections of artifacts and lives, and finally we join privileged prisoners working to break wild mustangs in the desert playa.

Each story opens with a strong sense of place, a word-picture that sets the scene for the difficulties to follow. Some take place outside. “It hadn’t rained for three weeks. Heat seared the wide, flat saucer of the Great Basin, bending the light in a phantasm of waves, which, in their shimmer, obliterated the image of anything inhabiting the barren ground.” Thus begins the plight of a herd of horses being driven into a tight corral where their spirits will be broken by men struggling to keep their own spirits from being broken, too. The scene and the story’s events are closely allied.

Equally stark and unforgiving is Reno’s artificial terrain. “The manufactured landscape of the Outpost Truck Stop parking lot held dozens of aluminum arroyos that throbbed with the staccato pings of a dozen diesel engines.” Inside another local establishment, a casino employee walks “around the banks of slot machines and down, across rows of gaming tables intercepting anyone” and turning the visitors, “most importantly,” away from the exit. Maynard has a keen eye, not only for the nitty gritty of the slovenly side of Reno but also for the way that edginess underscores the precariousness of his characters. As I read his words, I could picture his scenes exactly, and I could well imagine the men and women he describes.

Occasionally I wander through a casino, or fail to divert my eyes when driving a seamy downtown Reno side street. Maynard never closes his eyes at all, and he forces his readers to look steadily at a monstrous Reno, too. No romance here, in Grind, just the daily grind of marginal men and women struggling to survive.        – Ann Ronald

Ann Ronald is a retired English professor from the University of Nevada, Reno. Author of dozens of reviews, she’s also written a number of books about the American West. They include literary studies such as The New West of Edward Abby and Reader of the Purple Sage, cultural studies such as GhostWest and Oh, Give Me a Home, and nature writing such as Earthtones: A Nevada Album. Her latest is a work of fiction, Friendly Fallout 1953. Since retiring, she’s been reading vociferously, so “Bookin’ With Sunny” is giving her a wonderful opportunity to share thoughts about her favorite new discoveries.
More from this reviewer
PrevQuiet
Lawrence in ArabiaNext