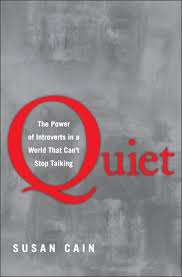 Let me tell you a story. Growing up in the 1950s, I was self-sufficient, not really shy, and I mostly played by myself. I wasn’t good at sports. So when ordered to play on a team, my reaction was mostly boredom. Consequently, I was dealt with harshly by my teachers. They felt my attitude was troubling, possibly dangerous, even subversive.

Now in the recent best-seller Quiet, author Susan Cain reveals that what happened to me was part of a vast social experiment spanning most of the 20th century. Its goal: to wipe out introvert personalities and remake them as extroverts. In the 19th century society developed a culture of character. Its admirable traits were duty, work, manners, integrity, and reputation. According to Cain, the 20th century spawned a new ideal called the culture of personality. Its virtues were described as dominant, forceful, attractive, and energetic.

Cain says the first manifestation of this new culture was the roaring 20s which seemed to dismiss the basic attributes of character and encourage careless, irresponsible behavior. Even the most casual observer might notice that charismatic personalities were responsible for so many excesses of 20th century living.

As a Wall Street attorney and puzzled by aspects of her job which made her uncomfortable, Susan Cain began to research dozens of psychological studies, many of them recent. She actively sought to interview the researchers. The detailed results form the bulk of Quiet. The full title is Quiet: the Power of Introverts in a World That Can’t Stop Talking.

One of the interesting places she examined was the Harvard Business School, a place where aggressive speech and behavior is rewarded. Here through exhaustive group effort, leaders are taught to express confidence and make decisions based on incomplete information. The dilemma is whether to court disaster by acting on bad information or risk the loss of prestige by expressing less than absolute certainty. As you might imagine, the institution of the Harvard Business School is a chamber of horrors for introverts.

In the natural order of things, extroverts and introverts can work closely together as a team. This kind of collaboration can produce success on a scale the partners could hardly achieve on their own. Cain’s best example is Franklin and Eleanor Roosevelt. Franklin the extrovert was great at making social contacts, but introvert Eleanor provided intellect and character. Only together did they achieve greatness. Conversely, Cain suggests decisions made by extroverts in this century, without the natural prudence and caution of introverts, led to the Enron debacle and the sub-prime mortgage meltdown.

Cain lists many introverts such as Gandhi and Einstein who succeeded despite their introversion or perhaps because of it. In the later chapters, she suggests exercises introverts have employed to improve their level of achievement. She also has advice for parents who want their introvert children to succeed without immersing them in large group situations and other dubious social experiments. Following bad advice can make your child withdraw even more.

The last hundred pages of this bulky book include acknowledgments, an index, bountiful chapter notes, and many pages of questions and answers. If Quiet seems an awesome mountain to climb, just relax. Reading Quiet made me feel better about myself. The book gives ample evidence that here in the 21st century, researchers, educators, and parents are starting to value introverts and the part they play in society much more than when I was a kid.    – Dan Erwine

Dan Erwine holds a BS in Telecommunications, San Diego State University. Dan recently retired after four decades in radio broadcasting. His background San Diego stations KFSD and NPR's KPBS, and KUNR, Reno, NV. Over the years, Dan has produced and hosted a number of talk shows and interviewed over five thousand writers in almost every genre and career, from such notables as David Brin to Seamus Heaney, Allen Ginsberg, Judy Collins, Charlton Heston and Wally Schirra. Dan is a comic book aficionado and has a special interest in film, science fiction and mystery. He lives with his wife in Reno, NV.
More from this reviewer
PrevThe Thief
GrindNext