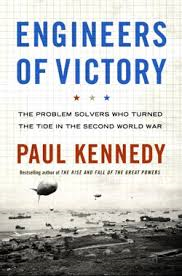 Engineers of Victory: The Problem Solvers Who Turned the Tide in the Second World War

Disclaimer: I gladly admit to a generally favorable attitude towards Engineers of Victory as evidenced by my incorporation of perspectives and conclusions from it into the 2013 version of World War II from a Global Perspective, an upper division history class at the University of Nevada. However, some of the author’s technical discussions have been challenged by techno-critics. In my estimation these criticisms do not challenge his major contentions. Let the reader beware.

Paul Kennedy, best known for his 1987 book, The Rise and Fall of the Great Powers, has returned to writing about one of his chief interests, World War II. This is no ordinary military history. It attempts to answer a continually intriguing question: why did the Allies win World War II? The glib answer is that victory was achieved by British pluck, Soviet blood, and American production. Kennedy goes someway beyond glibness; his approach to answering the question is an original one that sets it apart from the multitudes of ordinary studies. He attempts to discern the role that technological innovation played in helping the Allies implement their grand strategies.

An old saw about the history of war is that arm-chair generals study strategy, operations, and battles, and that professional generals (and admirals) study logistics. Narrowly, logistics, in the twangy phrase of the Rebel terrorist-general Bedford Forest, is about supplies getting “the firstest with the mostest” to the battlefield. Kennedy approaches logistics more broadly. In doing so, he answers a question that precedes even Bedford Forest’s pithy summation. He wants to know how it came to be that certain technological solutions were conceived and implemented by the Allies during World War II, solutions that allowed the Allies to effectuate their grand strategic designs, solutions that set the pre-conditions for and then led to “turning the tide” in mid-1944.

Kennedy, with economy and precision, lays out his argument. The Allies (sans Stalin) met in Casablanca in January 1943 to craft a strategic vision as to how the war ought to proceed and end. The conclusions were mostly straightforward: defeat Germany first, press against the Japanese when opportunity and resources became available, none of the allied nations to conclude a separate peace, and unconditional surrender of Japan, Germany, and Italy. There were corollaries to these strategic visions, necessary to implement the strategic conclusions. One example: eventually a successful, large-scale invasion of France by the allies would be necessary. To do so would require that German divisions be kept busy in Eastern Europe. Ergo, the Soviet Union had to be kept in the war requiring the Soviet Union receive some critical supplies from the U.S. and Great Britain. Also, an invasion of Europe had to be launched from Great Britain. So, GB had to remain active in the war and be supplied by the United States. Conclusion: the North Atlantic sea-lanes had to be secured from the German U-Boat menace.

Enter Engineers of Victory and Kennedy’s analysis of technological enterprise. In a series of five “How to” chapters, for example “How to Stop the Nazi Blitzkrieg,” Kennedy writes with detail and insight about how the solutions were created, manufactured, and then implemented on the battlefield (whether land or water). Innovations by both the British in North Africa and the Soviets on the Eastern Front contributed to stopping the blitzkrieg. His conclusions are invariably enlightening and sometimes surprising, for example his assessment of the Soviet T-34 tank. His chapters include contributions by all of the major Allies: Great Britain, the Soviet Union, and the United States. They cover practical applications relevant for campaigns in North Africa, the North Atlantic, Great Britain, France, the Soviet Union, and the Pacific.

There are cursory discussions here of the B-29 and the Atomic bomb. They lie outside the scope of Kennedy’s argument. The innovations he writes about, technological improvements crucial for implementing the strategic vision laid down at Casablanca, were all having their decisive impacts by the summer of 1944. In the summer of 1944 the B-29 was a technological mess and the atomic bomb’s reality was still a year away. The innovations he describes came about because of the insights and work of pilots, scientists, engineers, factory workers, garage-tinkerers, and old salts, to name a few—engineers in the broadest sense. Some breakthroughs were actively sponsored by their governments; others came about despite government bureaucracies, military and civilian. Taken all together they give credence to Kennedy’s assertion that ordinary men doing small things well make the achievements of great men possible.       – Neal Ferguson

Also available by Paul Kennedy: The Parliament of Man, the Past, Present and Future of the United Nations; The Rise and Fall of British Naval Mastery; Preparing for the Twenty-First Century; Grand Strategies in War and Peace; Strategy and Diplomacy 1870-1945; The Rise and Fall of the Great Powers; War Plans of the Great Powers 1880-1940; The Rise of the Anglo-German Antagonism 1860-1914; Pacific Onslaught (History of 2nd World War).

Neal Ferguson is a self described Anglo-phile. After studying for a PhD in British history and doing research for a year in various British archives, he came to the University of Nevada in 1970 to teach. Soon he found himself in administration where he remained until 2003. After returning to full-time teaching a decade ago, he decided to concentrate his teaching energies on Medieval British history and various global aspects of World War II. Dedicated to Ambrose Bierce’s proclamation that the purpose of war is to teach Americans geography, Neal insists that his students accompany him (in class) to sundry east European rivers and steppes, African deserts and jungles, south-east Asian mountain ranges and peninsulas, and small islands and coral reefs in the Pacific. Currently he is writing a book about the ups and downs of General Douglas MacArthur’s military reputation.
More from this reviewer
PrevLawrence in Arabia
The DetourNext