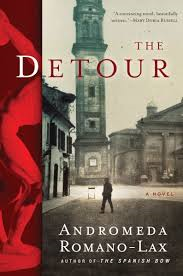 Sometimes, when you open a book and begin reading, you’re totally surprised. Expecting one sort of novel, you discover another. That happened to me when I dug into Andromeda Romano-Lax’s The Detour. The time is 1938. The Third Reich has ordered the main character, Ernst Vogler, to Italy, where his assignment is to escort a Classical Roman sculpture, “The Discuss Thrower,” back to Germany. The straightforward mission turns out to be both difficult and dangerous. Sounds like a thriller to me!

Wrong! The job disintegrates at the outset. Ernst is no superman, and he makes a series of mistakes, some unwitting, some obvious, and some stupid. Late for his appointment, he arrives after the sculpture has been crated. Two identical boxes are placed in the truck that is to convey the masterpiece to the Italian-German border. Ernst rides shotgun, accompanying two erstwhile policemen; another truck follows close behind. After a series of misadventures, Ernst realizes that the whole project is in disarray, the timetable for delivery will be impossible to fulfill, and his own safety is problematic.

The book cover of The Detour cites a reviewer who describes Ernst as “a beautifully layered character—misunderstood, doubting, secretive, precise.” That’s why my initial expectations about this novel turned out to be so wrong. I thought this novel would be a series of encounters, with lots of action on every page. But Ernst rarely takes control of a situation. More often than not, he responds with melancholy and introspection. In fact, he behaves more like a victim than a character whose fate is the source of his novel’s energy. Elsewhere in ‘Bookin’ with Sunny’ I’ve speculated about the difficulties controlling gender and point of view. Sometimes male authors have difficulty communicating the nuances of key female characters, and sometimes female authors have trouble getting inside the heads of their male players. That seems to be a problem for Romano-Lax, because Ernst—to me—just doesn’t seem masculine. Throughout the novel, he processes both physical and psychological traumas in ways I imagine a woman would think and behave, not as I believe a man would do.

That said, I thoroughly enjoyed Ernst’s world. Granting the author her basic premise—that Ernst is super-sensitive and profoundly inner-directed—The Detour is thoughtful, filled with suspense, articulate, and a genuine pleasure to read. The absurdity of the misadventures and the awkward responses of the main characters were more interesting than annoying. The deeper Ernst finds himself in the Italian countryside, and the deeper he finds himself wrapped in his own history and his own persona, the more I enjoyed the book. If he’s too feminine, so be it. I simply appreciated his thought processes

Even the structural premise of Ernst’s story works appropriately in Romano-Lax’s hands. That is, Ernst has returned to Italy ten years later and is ambling through the rural landscape where he and the sculpture were trucking before. While he walks, he reconstructs and reconstrues the past. He also thinks seriously about Nazi Germany of the 1930s and its subsequent demise. This layered effect works well, and makes The Detour a provocative experience for this strange character and for his readers. I didn’t get my Third Reich thriller when I read The Detour, but I got a stimulating and complex book to read.              – Ann Ronald

Ann Ronald is a retired English professor from the University of Nevada, Reno. Author of dozens of reviews, she’s also written a number of books about the American West. They include literary studies such as The New West of Edward Abby and Reader of the Purple Sage, cultural studies such as GhostWest and Oh, Give Me a Home, and nature writing such as Earthtones: A Nevada Album. Her latest is a work of fiction, Friendly Fallout 1953. Since retiring, she’s been reading vociferously, so “Bookin’ With Sunny” is giving her a wonderful opportunity to share thoughts about her favorite new discoveries.
More from this reviewer
PrevEngineers of Victory
Chinese FablesNext