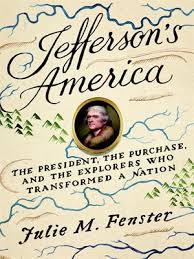 The President, the Purchase, and the Explorers Who Transformed a Nation

In our cultural memory, the Lewis and Clark expedition dominates the early years of Thomas Jefferson’s presidency. So, I began reading this book wondering, “Why do we need another book about that thrilling, but exceedingly well-known, trek from the Mississippi to the Pacific?” I read a dozen pages before I concluded that my question was ill-conceived. In Fenster’s Jefferson’s America, the Lewis and Clark expedition is a part, but only a part, of a far larger and even more intriguing story, a story that she tells with verve and insight.

Every U.S. history textbook includes a section on the Louisiana Purchase. Generally, it is followed cheek-by-jowl with a section on Lewis and Clark. Fenster, by contrast, organizes her book around Jefferson’s geopolitical aims and desire to expand the fledgling nation westward, beyond the Mississippi River and also southward into Florida. He began these initiatives even before the Louisiana Territory had been purchased from the French. Immediately before the sale, the Spanish controlled the area. Moreover, Spanish colonial officials, still in possession, surrendered control in Louisiana to the upstart Americans slowly, reluctantly, and sometimes belligerently.

It was Jefferson’s desire to explore and claim the largely undefined Louisiana Territory in three vital geographic dimensions: to discover the headwaters of the Mississippi by exploring the river above St. Louis, to define the southern limits of the Louisiana Territory along the Ouichita and Red Rivers, and to find both the headwaters of the Missouri River and a path to the Pacific via the Columbia River. Importantly, the Spanish were prepared to contest American encroachment in Florida, along the lower reaches of the Mississippi, and all along the Red River from its origins in New Mexico and north Texas to its confluence with the Mississippi.

This is the story of four expeditions into the Louisiana Territory by six explorers, “Jefferson’s men.” Each of the expeditions occurred between 1804 and 1806. In Fenster’s view, the explorers and their explorations collectively “unlocked the 19th century.” The aggressive Americans exploded across the remainder of the continent in the four decades following 1806. During those two years, however, the United States was on the verge of war with Spain numerous times. Thomas Freeman, one of the explorers faced down a thousand man Spanish army force northwest of modern Texarkana on the Red River while a second, Zebulon Pike (of Pike’s Peak fame), was arrested in Spanish Colorado and jailed for a several months by Spanish officials.

Three of the six explorers were army officers. Three others were scientists, surveyors and naturalists. All were self-sufficient and surprisingly competent while confronting unending new challenges. For me, Lt. Zebulon Pike stands out. While I am not inclined to reveal the details, suffice to say that I found myself reading about his adventures, shaking my head in disbelief, and realizing that he was made of sterner stuff than I. The author describes Pike as “stupid in pursuit of a goal,” not much of an exaggeration.

Fester’s method of presenting this engaging material and these intriguing men is to present their stories more or less synchronously, a method she employs with wit and effectiveness. She very often leaves a story line hanging while bouncing the narrative to another explorer or, indeed, another side of the continent. On November 11, 1805, for instance, Lewis and Clark met some Kathlamet Indians on the Columbia. One of the Indians was dressed in sailor’s coat and trousers. Without explaining how he came by his uniform, Fenster switches the narrative to a dinner party being hosted by Jefferson, the purpose of which as to interview Thomas Freeman, surveyor and astronomer. The President intended to vet Freeman as the possible leader of the Red River expedition that he considered as second in importance only to the Lewis and Clark exploration. Freeman got the job.
But that was only the beginning. Neal Ferguson

Also available by Julie M. Fenster: FDR’s Shadow: Louis Howe, The Force that Shaped Franklin and Eleanor Roosevelt; The Spirit of Invention, The Story of the Thinkers, Creators, and Dreamers Who Formed Our Nation; The Case of Abraham Lincoln; Race of the Century; Mavericks, Miracles, and Medicine; Either Day, The Strange Tale of America’s Greatest Medical Discovery and the Haunted Me Men Who Made It; Yahoo! Ultimate Guide to Finance and Money on the Web; Boston Guide; Packard, the Pride. 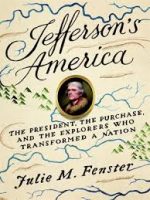 Neal Ferguson is a self described Anglo-phile. After studying for a PhD in British history and doing research for a year in various British archives, he came to the University of Nevada in 1970 to teach. Soon he found himself in administration where he remained until 2003. After returning to full-time teaching a decade ago, he decided to concentrate his teaching energies on Medieval British history and various global aspects of World War II. Dedicated to Ambrose Bierce’s proclamation that the purpose of war is to teach Americans geography, Neal insists that his students accompany him (in class) to sundry east European rivers and steppes, African deserts and jungles, south-east Asian mountain ranges and peninsulas, and small islands and coral reefs in the Pacific. Currently he is writing a book about the ups and downs of General Douglas MacArthur’s military reputation.
More from this reviewer
PrevHero of the Empire
The Best American Poetry 2015Next