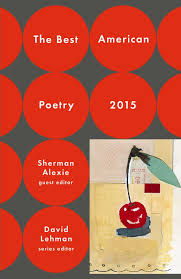 The Best American Poetry of 2015

If we liked every piece in The Best American Poetry, it would be a red flag that the anthology isn’t representative of all that contemporary poets have to offer. More often than not, we may come across a poem that doesn’t engage us for a number of reasons related to form and content. Now, more than ever, trends are as diverse as the readers who consume poetry. The 2015 anthology negotiates a balance between free verse and formal traditions; it includes narrative work as well as poems that experiment with disjunction. There are poems to love and admire, and there are poems to hate but respect.

Readers’ differences set aside, I think we can all appreciate poems that cross borders and break stereotypes. Some of the cultural stereotypes assigned to poetry are that it is serious, elitist, and inaccessible. This anthology reminds its readers that poems can do funny things. While The Best American Poetry does serious work—bringing marginalized voices to the forefront and discussing the current state of humanities studies—it doesn’t forget to include comic relief. This anthology pays tribute to the different places where language can come from, including Craigslist personal ads. In Melissa Barrett’s “WFM: Allergic to Pine Sol, Am I the Only One,” the author gives us a delightful taste of found poetry. In the following excerpt, Barrett creates a seamless amalgamation of lines from Craigslist, and the result is humorous:

“…Sexiness to me is you
plus a photographic memory. Do you have questions
you’ve always wanted to ask a woman? You left your receipt
and that’s how I figured out your name. I was behind you
at the Lane Avenue Starbucks drive thru and you paid
for my grande nonfat no whip Mocha Frapp.
Your silver hair was gorgeous. Wow.”

A number of poems in this anthology celebrate the intersection between formal patterns and contemporary language. For example, Rachel Briggs’ “In the Hall of the Ruby-throated Warbler” is a poem that employs Sapphic meter. According to the Academy of American Poets, this metrical pattern dates back to ancient Greece, and Briggs uses it to lend musicality to her love poem. Another well-established form is the spatial (or concrete) poem. While the earliest spatial poems were patterned after geometric shapes such as the triangle, rectangle, and egg, today they take on a variety of creative designs (Miller 141). I am particularly delighted by Best American Poetry’s inclusion of “In a Black Tank Top” by Danielle DeTiberus. This poem tells the story of two teenagers discovering their sexuality, and the narrative unfolds against the suggestive pattern of a tank top taking shape on the page.

The Best American Poetry also puts forth work with complex comparisons—metaphors are manipulated so that they can be interpreted in more ways than one. For instance, Natalie Diaz uses Noah’s Ark as an extended metaphor in “It Was the Animals.” As we enter the world of the poem, Diaz blends the dramatic situation with the metaphor, creating a surreal experience:

“He was wrong. I could take the ark.
I could even take his marvelously fucked fingers.
The way they almost glittered.

they came up the walkway into my house,
cracked the doorframe with their hooves and hips,
marched past me, into my kitchen, into my brother…”

This piece depicts a difficult sibling relationship, and Diaz describes this kind of love as “both the flood and the ark”—a love that is simultaneously destructive and redeeming. This is the kind of metaphor that moves like a coin being tossed into the air; as the comparison evolves, we’re not quite sure if we are going to land on heads or tails by the end of the poem.

In many poems from the anthology, readers will find themselves looking at ordinary subjects through an extraordinary lens. A good poem must engage the reader’s interest or empathy using little space, and there are poems that even manage to elicit an emotional response for inanimate objects. In James Galvin’s “On the Sadness of Wedding Dresses,” the once-worn garments are given human attributes:

“A few lucky
wedding dresses
Get worn by daughters—just once more,
Then back to the closet.
Most turn yellow over time,
Yellow from praying
For the moths to come
And carry them to the sky.”

Here, the poet’s ability to mirror longing and desire from the perspective of a neglected wedding gown makes this piece worthy of attention.

Another author who paints a mundane subject in a different light is Jane Hirshfield. In “A Common Cold,” Hirshfield creates an unlikely ode to an irksome ailment:

“A common cold, we say—
common, though it has encircled the globe
seven times now handed traveler to traveler
though it has seen the Wild Goose Pagoda in Xi’an
seen Piero della Francesca’s Madonna del Parto in Monterchi
seen the emptied synagogues of Krasnogruda
seen the since-burned souk of Aleppo.”

As the rhinovirus transforms into a well-traveled agent with sophisticated tastes, Hirshfield’s poem resonates with a piece of advice that lies at the heart of all good writing: tell the audience something they don’t already know. We can now add the common cold to our contemporary canon of unsung villains.

Like fiction, there are moments in poetry that ask us to suspend our disbelief. Sometimes logic must be thrown out the window to make room for the musicality of language. As children, we might’ve enjoyed the whimiscal stylings of Dr. Zeuss or shel Silverstein. The good news is that language continues to play beyond the realm of children’s literature, and we can see this in Tanya Olson’s “54 Prince”:

If we tried to make logical sense of this poem, a string of questions would get in the way of our enjoyment: shouldn’t “prince” be pluralized if there are fifty-four? Isn’t Earth the only planet known to be habitable? Where did fifty-four come from? As we find out in the contributor’s notes, Tanya Olson “needed something that sounded musical and falling. Fifty-four it was…” (188). As an oral tradition, poetry is a medium through which we can explore the cadence of our language, and music doesn’t always make logical sense.

While The Best American Poetry represents what our literary landscape has to offer today, it also bears implications for the future of the arts and humanities. Contributing author Sandra Simmonds questions where marginalized voices will stand: “What does it mean to be a working mother in the twenty-first century? Will my voice also be lost? Saved” (194)? Her poem “Similitude at Versailles” is preoccupied with how we study the humanities, drawing our attention to the voices that are excluded from the traditional canon. In her poem, she juxtaposes her experience as a mother with bits of information that we would find in a textbook: “Welcome to Humanities 203! / Here you will find the mysterious/ death of the honeybee, the Byzantine emperor, / Justinian, who made church and state / a seamless whole…Where’s mommy? / I said I was trying to write this poem / for the day, do you mind?” Here, the language moves back and forth between the scholastic conversation and the mother’s call of duty. As the languages of two worlds come in contact with one another, Simmonds invites us to consider the intersections of a writer’s identity: “What does it mean to try to write a poem in a house when children need to be fed, when cartoons are distracting you from trying to write, when you are living from paycheck to paycheck” (194)? Echoing Simmonds, poetry is no longer confined to a privileged class, but it is a reflection of a diverse spectrum of experiences. Her work suggests that the conversation surrounding contemporary poetry will continue to ask questions that challenge our perception of the arts and humanities: in what ways can we continue to diversify the canon?

In regard to diversifying the canon, it is not solely a matter of balancing gender and ethnic representation; it is just as important to break down barriers between disciplines. While many of the poets in this anthology are teachers of creative writing, there are some who come from other backgrounds. One such poet is Rafael Campo who holds an MA and an MD. As he discusses the triggering subject for his poem “Doctors Lie, May Hide Mistakes,” Campo underscores the vital intersection between science and poetry:  “I do not mean to say that fact and truth cannot coexist in addressing illness; on the contrary, they are utterly complementary, and the narrative of illness that entails both is the closest we can get to offering meaningful hope to the afflicted” (165). Campo’s poetry parallels the work of other contemporary writers, such as Alison Hawthorne Deming, who celebrate the crossover between empirical research and artistic expression.

As with any anthology of “best work,” there will be an ongoing debate as to whether or not the selected pieces are truly representative of the finest poetry. The Best American Poetry 2015 lives up to its name by showcasing the range and depth of contemporary verse. This anthology celebrates innovation while paying tribute to formal traditions; and more importantly, it encourages us to engage in a dynamic conversation about our multi-layered identities. – Joanne Mallari 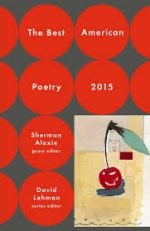 Joanne Mallari holds a BA in English (Writing) with a minor in Spanish from the University of Nevada, Reno. She currently teaches preschool at St. John’s Children’s Center. Her interests include poetry, shower recitals, and dancing at random. Joanne lives in Reno, NV.
More from this reviewer
PrevJefferson’s America – Transforming a nation
The Book of SpeculationNext