Home » Reviews » Books on books » The Book of Speculation

The Book of Speculation 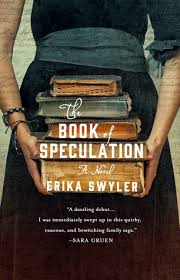 The Book of Speculation

As Sunny’s regular readers must have surmised by now, I’m not much of a fan of science fiction and I never read books about the supernatural. So much to my surprise, I’ve just finished an occult novel that I thoroughly enjoyed, perhaps because it hovers near the bounds of plausibility. Beyond the bounds for sure, but with quite likeable characters whose relationships are almost believable and whose actions dazzle on page after page. Erika Swyler’s The Book of Speculation is indeed speculative, but in a fascinatingly fantastic way.

The novel opens when an archival librarian receives in the mail a battered old nineteenth-century ledger. Water-damaged and falling apart, the book logs the day-to-day expenditures and events of a traveling circus. An accompanying note indicates that the recipient might find the journal somehow connected to his family. Simon begins reading, and soon begins putting the pieces of his heritage together. His mother, who drowned when she was in her thirties, was a circus performer before she married. There, in the ledger, are more deaths by drowning, always on the same July day, though decades apart.

Apparently this is/was a family of circus performers, generations of them, who had two special skills. First, they could hold their breaths underwater for 10 to 12 minutes. Advertised as mermaids, why did they drown?  Second, they all were fortune tellers, men and women who dealt Tarot cards and foresaw the future. Simon’s acquisition, in fact, contains pictures as well as numbers and narratives, and those pictures are all hand-drawn Tarot cards. What fortune, whose fortune, might they tell?

The Book of Speculation goes back and forth, alternating chapters about Simon’s current life on Long Island with a conjectured narrative from that circus in the past. Swyler smartly handles the unlikely echoes from one generation to the next as well as Simon’s vacillating assumptions about those connections. She also propels her story along by introducing Simon’s sister, another circus performer, another Tarot-dealing woman who can hold her breath under water and who behaves as erratically as her familial predecessors. To make matters worse, the date of their deaths looms just a few days after Enola arrives on Simon’s doorstep. He needs to solve the family curse before the 24th of July.

Tantalizing?  Surprisingly so. I know nothing about what can be told and foreseen by Tarot cards, but Swyler deals the cards well. Not only do the generations reverberate and echo, but the cards, their faces and their combinations, replicate the family fortunes, over and over again. The Book of Speculation finally solves a century-old mystery (maybe that’s why I so liked it, it’s actually a mystery). The satisfying solution comes with consummate rains, with countless turnings of the cards, and with in-depth genealogical research that unearths some surprising family ghosts. Unbelievable, to be sure, but told by Swyler in a realistic, almost logical fashion. Much to my surprise, I’m comfortably recommending this very deep breathless dive into a watery occult world.   – Ann Ronald

The Book of Speculation is Erika Swyler’s debut novel. 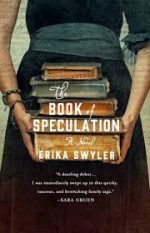 Ann Ronald is a retired English professor from the University of Nevada, Reno. Author of dozens of reviews, she’s also written a number of books about the American West. They include literary studies such as The New West of Edward Abby and Reader of the Purple Sage, cultural studies such as GhostWest and Oh, Give Me a Home, and nature writing such as Earthtones: A Nevada Album. Her latest is a work of fiction, Friendly Fallout 1953. Since retiring, she’s been reading vociferously, so “Bookin’ With Sunny” is giving her a wonderful opportunity to share thoughts about her favorite new discoveries.
More from this reviewer
PrevThe Best American Poetry 2015
UprootedNext