Home » Reviews » Hero of the Empire

Hero of the Empire

Hero of the Empire: The Boer War, a Daring Escape and the Making of Winston Churchill

Winston Spencer Churchill  (WSC) was in most respects a 19th century Englishman even though he gained most of his fame (and notoriety) in the 20th century. So the long title of Candice Millard’s latest historical work makes sense: a 19th century title for a 19th century subject. The complicated title also may be necessary in order to create appeal among Americans who might tend to associate Churchill with World War II to the exclusion of other aspects of his long and colorful career. Or maybe it was designed to collect more Google hits.

WSC devotees are familiar with his military and journalistic adventures at the turn of the century when he was a young man in his twenties. So, Millard is not breaking new ground in this book, but she tells a thrilling, always entertaining story. She is careful to set the WSC escape story in the wider context provided by the high noon of the British Empire when it had reached its apogee but couldn’t be said to have begun its long sunset.  At high noon, the Empire was challenged dramatically by what the British called the Boer War (1899-1903) and the white South Africans would call the Second Freedom War. Eventually, the British would declare victory, but it was a victory that left the white Dutch-Boers in tacit control of territories that would emerge as South Africa and Rhodesia.  But whatever the title, it was Winston’s war.

Even as a young man WSC was a British imperialist almost without peer, a consequence of family background, education, reading habits, and temperament. Born in 1874 he cut his teeth on some of the hundreds of adolescent novels written by the likes of H. Rider Haggard, novels that nearly always told the story of a young British boy who finds himself in some actual historical event where, by courage, pluck, and British breeding, he overcomes vast obstacles to prove himself worthy of his elite, white, British, privileged status.

Although born into an aristocratic family of extraordinary name—the Churchill’s, Dukes of Marlborough, WSC was the son of a second son. Consequently, he had no claim to lands, titles, or fortune and was not himself an aristocrat. Still, he felt himself to be fully a member of that tiny elite. In American terms, WSC began life on third base. Unpredictably perhaps, he internalized at a very young age the incumbency that he make his own way in the world. He was bred to politics; it was in politics that he determined to make his mark. How to achieve that desire? How to finance that ambition? Millard’s answers to these questions shows her understanding of WSC’s psychology, the peculiarities of British culture, and the opportunities that the Empire provided for the “right sort” of young men.

WSC went to Sandhurst (Britain’s West Point) and began a career in the Army. The Army offered possibilities for adventure and medals for bravery—avenues into politics—but WSC was in a hurry. His ambition was nearly incandescent. The Army was no place for a young, poor officer who lectured his superiors on strategy, tactics, and nearly everything than came to his mind. But he wanted to go to war, to become famous, and to turn fame into a political career. If not as a military officer, how else? As a journalist! When the Boer War erupted, he had two advantages: he had already written popular first-hand accounts of wars in Africa and he was already an exceptional writer. (Throughout most of his life, he supported his champagne tastes through his writing—writing, loans and unpaid bills.) Off he went: to captivity, fame, and the rest is fascinating history.   –  Neal Ferguson

Also available by Candice Millard: The River of Doubt; Destiny of the Republic, A Tale of Madness, Medicine and the Murder of a President. 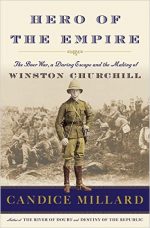 Neal Ferguson is a self described Anglo-phile. After studying for a PhD in British history and doing research for a year in various British archives, he came to the University of Nevada in 1970 to teach. Soon he found himself in administration where he remained until 2003. After returning to full-time teaching a decade ago, he decided to concentrate his teaching energies on Medieval British history and various global aspects of World War II. Dedicated to Ambrose Bierce’s proclamation that the purpose of war is to teach Americans geography, Neal insists that his students accompany him (in class) to sundry east European rivers and steppes, African deserts and jungles, south-east Asian mountain ranges and peninsulas, and small islands and coral reefs in the Pacific. Currently he is writing a book about the ups and downs of General Douglas MacArthur’s military reputation.
More from this reviewer
PrevMagic Hour
Jefferson’s America – Transforming a nationNext