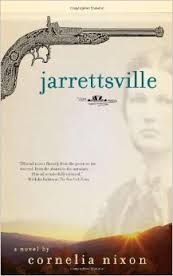 Jarrettsville fictionalizes a true event that occurred on the fourth anniversary of the Confederate surrender at Appomattox. The novel opens with the traumatic, climactic scene. Next, the action goes back four years to render preceding activities and encounters leading up to the ultimate confrontation. Then comes the aftermath, a trial, and the jury’s verdict. Finally, an epilogue concludes Jarrettsville, one that contains actual newspaper accounts of the proceedings, articles taken from the New York Times, the Baltimore Sun, and the Baltimore Gazette.  The epilogue also acknowledges the author’s personal relationship to the story, a family disgrace kept from young Cornelia Nixon’s ears but finally revealed to her by her mother. Nixon investigated further, then decided to turn the tale into a novel, fully delving into the hearts and minds of the people involved and imagining their innermost thoughts, their hopes and fears, their prejudices and beliefs.

I’ve read many books about wartime, but I’m not sure I’ve ever read a better one about the extended impact on an extended family. Jarrettsville takes place in Maryland, not far from Pennsylvania, not far from Gettysburg, near the scenes of some of the Civil War’s bloodiest battles. Most of the major characters are related in one way or another—brothers, sisters, husbands, wives, aunts, uncles, cousins, and distant cousins twice or thrice removed. The fighting has ended, a truce has been signed; but bitter emotional and philosophical divisions still remain. Like so many other families involved, these relatives fought on both sides, passionately. Half of them adored Abraham Lincoln, while the other half rallied around John Wilkes Booth; half were abolitionists, the others devout Southerners; half trusted northern policies, the others loathed their interloping foes. Everyone lived in a divided social milieu, too, surrounded by friends and neighbors who were still at odds.

In some respects Jarrettsville is about just a couple of people and their immediate relations. In a larger context, however, the book is all about the aftermath of that bitter Civil War. Prejudice surfaces and resurfaces, especially at the testimonies given at the trial. Reading what the witnesses were thinking, and how they were interpreting what they saw or thought they saw, provides a window into the post-war southern psyche, I think. Never heavy-handed, never saying too much, only through allusion, then adding an aside or two, Nixon offers a powerful examination of people construing the world they now inhabited. All this is done only by indirection and innuendo, but for me it added a powerful dimension to an otherwise personal story. Although this novel certainly touched my heart, it also tweaked my intellect in very subtle ways.

You could call Jarrettsville a woman’s novel, an historical romance, a latter-day version of Romeo and Juliet, but that description is far too simple. Nixon carefully expands the range of her fiction here, and the result is a stunning tour d’force. She deserves many accolades for her achievement, and her novel definitely deserves reading. If I were awarding stars on a one to ten basis, Jarrettsville deserves a ten!   – Ann Ronald 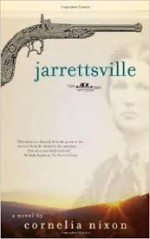 Ann Ronald is a retired English professor from the University of Nevada, Reno. Author of dozens of reviews, she’s also written a number of books about the American West. They include literary studies such as The New West of Edward Abby and Reader of the Purple Sage, cultural studies such as GhostWest and Oh, Give Me a Home, and nature writing such as Earthtones: A Nevada Album. Her latest is a work of fiction, Friendly Fallout 1953. Since retiring, she’s been reading vociferously, so “Bookin’ With Sunny” is giving her a wonderful opportunity to share thoughts about her favorite new discoveries.
More from this reviewer
PrevOff Mike
The Taste of WarNext