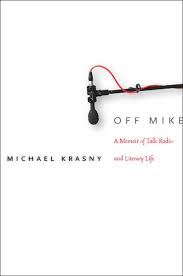 Off Mike, A Memoir of Talk Radio

Michael Krasny always wanted to be a writer like his idols Norman Mailer and Saul Bellow, but other things kept getting in the way. Instead he became a tenured professor of English and creative writing at San Francisco State University, a job he loved. In 1976 Krasny was asked by the head of the universtity’s Audio/Visual Department if he would be interested in interviewing Gore Vidal for the intra-campus television network. It was strictly a one-shot deal. This led to a ten-year part-time gig hosting a talk show on San Francisco’s ABC affiliate, KGO radio.

In his recent memoir, Off Mike, Krasny recounts a disturbing trend in talk radio with the rise of such combative figures as Rush Limbaugh, G. Gordon Liddy, Oliver North, and Howard Stern. The local management of KGO seemed to endorse this landslide of vulgarity. Krasny was fired and then in the early 1990’s, he moved over to San Francisco’s public radio station KQED, assuming the reins of the already existing show Forum. He’s been there ever since.

Krasny blossomed in the healthier atmosphere of public radio. He does express mixed feelings about the network, National Public Radio, and its controlling ways. Based in Washington DC, this 44-year-old institution allows itself to be referred to only as NPR.

Two issues Michael Krasny refers to again and again are his Jewish roots and his left-wing politics, characterizing them as compatible philosophies. He probably spends too much print on proud moments like his on-air handling of such horrifying events as 9/11. Overlooking the ephemeral nature of radio, Krasny recalls with grinding detail exact words and phrases uttered in dark times.

On the other hand, there is great value in the way Krasny articulates the relationship between writing and talk radio. I’m not sure I can sum it up, but there is magic in the interchange between a brilliant, possibly famous guest and a skilled interviewer. It’s like a truce, an understanding that you are not friends yet have agreed for a space of time to sit in a little room talking to a machine, sharing thoughts and feelings and benefitting equally. It’s a metaphor for the literary process of thinking, writing, and reading.

Krasny and I have something in common. We both were employed in commercial radio, then switching to public radio and ending up hosting talk shows on public radio stations. In Off Mike (love that title!), Krasny spices up his memoir with detailed biographic sketches and personal impressions of some of the writers he has interviewed.

I, too, have also hosted some of those same writers: T.C. Boyle, Camille Paglia, Russell Banks, Anne LaMott, Allen Ginsberg, Edward Albee, Amy Tan, and the formidable Gore Vidal. As you might imagine, Off Mike is an important book for me, The highest compliment I can pay to the author is to state the simple truth. Michael Krasny, you have achieved your ambition: you are a writer. 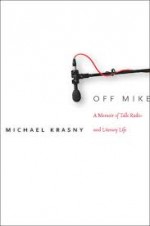 Dan Erwine holds a BS in Telecommunications, San Diego State University. Dan recently retired after four decades in radio broadcasting. His background San Diego stations KFSD and NPR's KPBS, and KUNR, Reno, NV. Over the years, Dan has produced and hosted a number of talk shows and interviewed over five thousand writers in almost every genre and career, from such notables as David Brin to Seamus Heaney, Allen Ginsberg, Judy Collins, Charlton Heston and Wally Schirra. Dan is a comic book aficionado and has a special interest in film, science fiction and mystery. He lives with his wife in Reno, NV.
More from this reviewer
PrevA Small Indiscretion
JarrettsvilleNext