The Taste of War 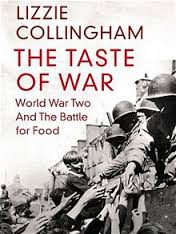 The Taste of War: World War Two and the Battle for Food

Admittedly, I take food for granted. Supermarket tomatoes and peaches tend to slice and taste like cardboard, so I avoid buying them. We have abundant food, and a significant percentage ends up in the compost heap or a local landfill. Malnutrition and obesity are American issues. Starvation? Not so much. After reading Collingham’s The Taste of War, I had to conclude that even then, during the war, our food problems in America were mostly what my daughter calls the prebbles—problems of the privileged or, more commonly, “first-world” problems.

There are many ways to slice and dice World War II. Collingham’s focus on the production and distribution of food is both novel and fascinating. However, I should hasten to add that this book is a five or six course meal not a small plate or tapas, but enough food metaphors. While concentrating on the major participants in World War II, she also discusses WW II food topics associated with Kenya, New Guinea, Bengal, Manchuria, and Korea to name but a few.

Growing up in America in the 1940’s and 1950’s, I heard numerous stories about rationing during the war. I have since learned that most of our privations were “small beer” compared to those experienced elsewhere in the world. In The Taste of War, Collingham spells it out bluntly. Among the major belligerents, Japan and the Soviet Union experienced the most devastating food shortages creating starvation syndromes that claimed millions of civilian lives in each country. The United States, by startling contrast, fed our own citizens and soldiers, shipped food to our allies during the war—including the Soviet Union—and to our former enemies after the war. Our caloric standards for troops were nearly twenty-five percent greater than those for the most well fed of other combatant countries, even Australia, a rare country that managed to have food surpluses during the war.

It is commonly observed that armchair generals study operations and tactics while professional generals study logistics. And in a long war where attrition is the goal, logistics is king. The longest lasting aspect of World War II was on the Eastern Front. Attrition was monumental. There the brutal killing lasted from June 1941 to May 1945. Daily, on average, the Soviets lost about 8,000 soldiers and 15,000 civilians killed. The majority of the civilians killed each day died from starvation and related diseases. In Collingham’s view, and I think it is the correct one, “killed” is the proper word because Germany’s established policy was to starve the populations residing in what is today Poland, the Baltic Republics, Belarus, Ukraine, and Russia. Germany wanted the agricultural products from these areas to feed its troops and to feed the Germans back home. Also, Germany tried to rid these areas of their populations so that Germany could colonize them.

It is a terrible and sad story, one of many in this book. Not all, however, were perpetrated by the Axis powers. Britain’s role in and response to the horrendous famine of 1942-43 in Bengal is one of the most inhumane chapters of its imperial past. This story is one of The Taste of War’s many strengths. Collingham evenhandedly discusses and analyzes the successes, failures and crimes of each of the major belligerents.

Collingham, synthesizes hundreds of books concerning food in WW II. She does a great service by devoting a segment of her book to the horrific conditions that existed around the world beyond the war’s end. We often think that the war ended either in May or August 1945 depending on which hemisphere we’re thinking about and that the world returned to normal. While not for the squeamish, Collingham provides perspectives about the famines of late 1945, 1946, and 1947 that force us to revise our comfortable illusions concerning the war’s real end. Civilians particularly continued to suffer grievously after the fighting had mostly stopped.   – Neal Ferguson

Also available by Lizzie Collingham: Curry, A Tale of Cooks and Conquerors.

Neal Ferguson is a self described Anglo-phile. After studying for a PhD in British history and doing research for a year in various British archives, he came to the University of Nevada in 1970 to teach. Soon he found himself in administration where he remained until 2003. After returning to full-time teaching a decade ago, he decided to concentrate his teaching energies on Medieval British history and various global aspects of World War II. Dedicated to Ambrose Bierce’s proclamation that the purpose of war is to teach Americans geography, Neal insists that his students accompany him (in class) to sundry east European rivers and steppes, African deserts and jungles, south-east Asian mountain ranges and peninsulas, and small islands and coral reefs in the Pacific. Currently he is writing a book about the ups and downs of General Douglas MacArthur’s military reputation.
More from this reviewer
PrevJarrettsville
The Age of MiraclesNext