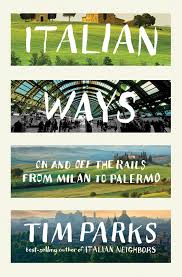 Italian Ways: On and Off the Rails from Milan to Palermo

The English-speaking world’s fascination—perhaps obsession—with Italy is at least 500 years old. A vast English literature exists describing the nearly limitless aspects of this fascination—Lake Como, the Duomo, Dante, the Quattrocento, Garibaldi, the sunlight, Rome, Rigoletto, Stradivarius, the Papacy, cucina, Palladio, grappa, the Grand Tour, Italian women, Italian men, the Amalfi Coast, and Mt. Etna to name a few. Tim Parks (a Brit) adds to this literature with his witty and incisive books about living in Italy, including his latest, Italian Ways, recounting his excursions on Trenitalia, the nationalized railway network.

Among travel writers, trains are often the conveyance of choice, but Tim Parks is not a travel writer. He is a novelist, one of his works, Europa, having been short-listed for the Booker Prize. He has translated numerous Italian fiction works into English and writes nonfiction books about Italian history (Renaissance banking) and various cultural intricacies (the Verona football team).

Having lived in Italy for more than thirty years, Parks came to the subject of Italian trains for reasons other than tourist travel. For many of those years, he has been a professor at a university in Milan but has always lived in Verona, some 100 miles away. For a dozen years he commuted by train two days or more each week. He traveled to Milan and back each day on “the train of the living dead” –a description of the riders on the sunrise commuter train from Verona to Milan. Next, for professional reasons, he began riding Italian high-speed and express trains, such as the one from Milan to Rome. Finally, as a concession to tourist train travel, he explored southern Italy and Sicily by train. While doing so he discovered a part of Italy not served by Trenitalia—the stiletto heel of the Italian boot where Otranto and its castle may be found. Italy’s nether region, Lecce in Puglia, is privileged to have a somewhat un-scheduled train system, FSE, a tiny competitor to the bloated, protectionist Trenitalia.

For Tim Parks, Italian trains are a window into the “Italian way of doing things.” More specifically, trains continue their role in making Italy as unified as it is, a unity that is as controversial among Italians as among dubious Europeans. In the early 19th century, Count Klemens von Metternich, an Austrian of questionable neutrality claimed that, “Italy is a geographical expression.” The expression stuck. The question lingers: has Italy yet become a nation rather than a mere land mass? Whither the Risorgimento? Parks thinks that Italy is a nation in part because the railways have helped spread a common language, one that allows the Italians to argue animatedly and interminably with each other. Maybe Italian TV is more responsible?

Tim Parks observes that trains are an expression of what a nation values (or doesn’t) even in the 21st century. In Italy, trains were built for political rather than economic reasons—to stitch a would-be nation together using parallel threads. Italian railways always operate in the red, and railway fares are significantly less than in the rest of Europe. They have risen significantly but only on high-speed or inter-city trains. Regional trains remain cheap because they are used by commuters. Italians consider it a God-given right to return to the towns of their births come the weekend, to visit Mom, Dad and childhood friends, even though the commuter might live in Florence and the town of birth might be Naples. Cheap fares are a necessity—a political one. Even corrupt politicians get it.

As much as he is at home in Italy, Tim Parks remains a foreigner and retains perspective. Often, even before he can demonstrate his complete Italian fluency, the Italian confronting him calls him “English.” Unlike the native Italian fish, however, Parks is aware of the water that he swims in. His descriptions and insights about that water make Italian Ways a refreshing immersion if not his best book. – Neal Ferguson 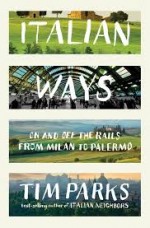 Neal Ferguson is a self described Anglo-phile. After studying for a PhD in British history and doing research for a year in various British archives, he came to the University of Nevada in 1970 to teach. Soon he found himself in administration where he remained until 2003. After returning to full-time teaching a decade ago, he decided to concentrate his teaching energies on Medieval British history and various global aspects of World War II. Dedicated to Ambrose Bierce’s proclamation that the purpose of war is to teach Americans geography, Neal insists that his students accompany him (in class) to sundry east European rivers and steppes, African deserts and jungles, south-east Asian mountain ranges and peninsulas, and small islands and coral reefs in the Pacific. Currently he is writing a book about the ups and downs of General Douglas MacArthur’s military reputation.
More from this reviewer
PrevThree from G. M. Malliet
Memories of a MarriageNext