Many readers adore cozy English village mysteries. From Agatha Christie’s Miss Marple stories to Louise Penny’s Inspector Gamache intrigues (Canadian, and twenty-first century, but still with cozy roots), we love the quaint, circumscribed settings, the casts of irascible characters, the solemn and thoughtful sleuths, and the secretive clues we should have noticed immediately. G. M. Malliet has added a new cozy twist with the introduction of Max Tudor, a retired MI5 operative who now serves as the Anglican vicar for a sleepy English hamlet called Nether Monkslip.

Wicked Autumn, the first in the Max Tudor series, introduces the hero and his parishioners, an enchanting collection of men and women who populate the isolated town. Unlike most modern mysteries but in tune with the cozy format, this one moves at a very leisurely pace. Nearly a hundred pages pass before anyone dies, although the set-up clearly points toward an upcoming death. Hints of guilt touch many Nether Monkslip citizens. It takes a while to uncover each one’s relationship with the victim, Wanda Batton-Smythe, an overbearing woman with a knack for insulting friends and foes alike. All agree her death is well-deserved, but the introduction of murder into such an innocent community is an unwelcome atrocity. The vicar, along with Detective Chief Inspector Cotton from nearby Monkslip-super-Mare, must solve the crime before any further murders might occur.

The second Max Tudor story, A Fatal Winter, moves at the same deliciously slow speed, although the murder occurs near the beginning of the book. This time an extended family is gathered at nearby Chedrow Castle, where the elderly Oscar, Lord Footrustle has invited his family for the Christmas holidays. When he is found stabbed to death, everyone at the castle has a motive and none has an alibi. Father Max goes to the castle ostensibly to console the mourners, but actually to put himself in the middle of another one of Inspector Cotton’s investigations. Like so many Agatha Christie novels, A Fatal Winter weaves an English country manor and a limited cast of characters into a tapestry of guilt and greed. Enter Father Max, nee Hercule Poirot.

Pagan Spring takes the vicar back to Nether Monkslip, reintroducing many of the characters from Wicked Autumn while bringing in new faces as well. The corpse this time is another unlikable human being, Thaddeus Bottle, a fading and egotistical London stage actor who has just retired to the Brigadoon-like community. As the opening dinner party demonstrates, he and his wife are oddly out-of-place there. Just two days later, a disheveled Melinda appears on Max’s doorstep. She’s discovered her husband’s body; can the priest come quickly and help? Before long, Max and Inspector Cotton are embroiled in another mystery that, like the others in the series, involves the present, the past, and mysterious interconnections.

There are many reasons to appreciate these three books. The motivations of Malliet’s characters are exceptionally well-delineated, with many secret links and unexpected intrigues. Those motivations are not far-fetched. Each plot, ultimately, makes perfect sense, with realistic solutions that satisfy. The cast of characters is winning, too. Their flaws and their foibles are charming, as are their suspicions and their tendencies to gossip. Equally appealing is Malliet’s prose, which echoes the pacing of her novels. She has a knack for slow-building similes and metaphors that bring particular observations to life. Wanda, for example, was “built for warfare—low to the ground, wide at hips and shoulders—she altogether gave the impression of a German WWII tank rolling through a French village as a speechless and demoralized peasantry looked on.” Awena, a woman who is becoming increasingly important to Father Max as the series progresses, “is without barriers, her soul translucent as glass, as sheer as a seashell worn smooth by tides and sand.”

I look forward to reading more about Malliet’s contemplative operative-turned-priest, about his troubled and secretive past, and about his emerging love for neopagan Awena. I also wonder how many more murders Nether-Monkslip can stand. I understand that A Demon Summer will be available soon, so obviously more secrets are in store. I can hardly wait!   – Ann Ronald

Also available by G. M. Malliet: A Summer Demon; Death of a Cozy Writer; Death at the Alma Mater; Death and the Lit Chick; 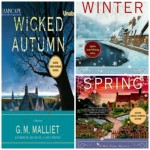 Ann Ronald is a retired English professor from the University of Nevada, Reno. Author of dozens of reviews, she’s also written a number of books about the American West. They include literary studies such as The New West of Edward Abby and Reader of the Purple Sage, cultural studies such as GhostWest and Oh, Give Me a Home, and nature writing such as Earthtones: A Nevada Album. Her latest is a work of fiction, Friendly Fallout 1953. Since retiring, she’s been reading vociferously, so “Bookin’ With Sunny” is giving her a wonderful opportunity to share thoughts about her favorite new discoveries.
More from this reviewer
PrevTraveling Light
Italian WaysNext