Home » This 'N That » Irena Sendler: In the Name of Their Mothers

Irena Sendler: In the Name of Their Mothers

I am happy to pass on to my visitors this notification of an important PBS show on National Day of Holocaust Remembrance, May 1st.  This is a must-see production and I thank Shana Penn for the forwarded information: 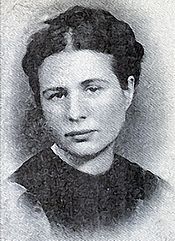 On National Day of Holocaust Remembrance this May 1st, PBS will premiere a stunning new documentary about Righteous Gentile, Irena Sendler, the heroic social worker who rescued 2,500 Jewish children from the Warsaw Ghetto in Nazi-occupied Poland.

Titled, “Irena Sendler: In the Name of Their Mothers,” this poignant film by first-time filmmaker Mary Skinner of San Francisco and New York, features the last in-depth interview Sendler gave before her death in 2008, at age 98.  Several Jewish men and women, who, as children, were saved by Sendler’s rescue operation, are also profiled.

As noted below, more information on this unforgettable story, including local listing times and further press information, is available online at www.pbs.org.