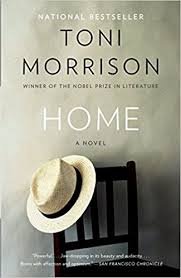 HOME   —   MORE THAN A HOUSE OR THE PLACE YOU COME FROM

“Home” is rather like a jigsaw puzzle (another of my favorite pastimes). It is a short novel, not 150 pages and when first read it seems very straightforward. Frank Money returns stateside from the war in Korea. He enlisted in the army to escape his hometown, Lotus, Georgia, leaving behind his kid sister Cee, the only person he truly cares for and who cares for him. Cee leaves Lotus shortly after her brother enlists, marries unwisely, and finally ends up abandoned and barely able to earn a living.

Frank is demobilized from an integrated army but returns to an unwelcoming and still segregated United States. Unlike most returning soldiers, he does not want to go home. Frank no longer knows where or what home is. Morrison asks the primary question: “Whose house is this?” (an epigraph from the first line of a poem she wrote long before the novel).

“Home” is written, in alternating chapters, in the voices of Frank and the omniscient author. Frank’s point of view is in italics, and his voice is real enough to challenge the author to get his story right. Homecomings are complicated, especially when unintended.

The story opens with Frank telling of the hardships that he and his family suffered in a Jim Crow south and of the afternoon he and Cee were hidden in a field watching two magnificent stallions fighting. “We saw them. Like men they stood.” It was not the only thing they saw but never spoke of on that afternoon.

Next, the author describes Frank regaining consciousness while drugged and tied to a hospital bed. Why is he there? Has he been in a fight? Fights and bouts of violence have become more and more a part of his life. He only knows that he must escape.

Between Seattle where Frank first arrives stateside and Chicago where he begins to settle, we follow Frank on his journey into a painful reality. Today’s readers will have no trouble recognizing Frank’s PTSD, his violent, secret-filled depressions. With no “spoilers,” I can say that he eventually receives a letter from a friend of Cee’s who tells him he must come to Atlanta. He must get Cee, or “She be dead.” He does this and takes his near-dead sister back to Lotus, hoping the women in that town will not shun her as before.

The women who nurse Cee are powerfully caring. Months of home remedies return Cee to the living. Frank stays in Lotus, repairing the home he hated, replanting the abandoned soil. Cee is no longer dependent on her big brother, and Frank struggles with what this means to his identity as a man. How does he come to terms with the strong, overbearing women who raised him and the equally strong women who have saved Cee? One shared secret Frank and Cee never speak of is what else they saw on that long-ago afternoon when they watched the stallions fighting. It is the unburying of that secret which helps to answer Morrison’s question about home. Is home a house, a city, or a state? Or might it be ourselves where our hearts can take refuge?   –  Sunny Solomon

Other available books by Toni Morrison: Beloved; Song of Solomon; The Bluest Eye; Sula; Jazz; A Mercy; Tar Baby; Paradise; God Help the Children; Home; Playing in the Dark; Love; The Origin of Others; What Moves at the Margin (Selected Nonfiction); Burn this Book; Race, Justice Engendering Power; The Big Box; The Book of Mean People; Peeny Butter Fudge; Please Louise; Little Cloud and Lady Wind; Birth of a Nationhood; The Tortoise or the Hare; The Lion or the Mouse; Race, Vintage Minis; Poppy or the Snake. (The children’s’ books are co-authored by Slade Morrison.) 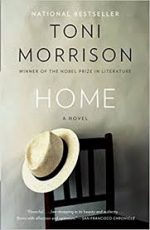 Sunny Solomon holds an MA in English/Creative Writing, San Francisco State University. She is a book reviewer for “The Clayton Pioneer” and her poetry and other writing has been published in literary journals, one chapbook, In the Company of Hope and the collection, Six Poets Sixty-six Poems. She was the happy manager of Bonanza Books, Clayton, CA and Clayton Books, Clayton, CA. She continues to moderate a thriving book club that survived the closure of the store from which it began. Sunny currently lives next to the Truckee in Reno, NV.
More from this reviewer
PrevEducated
River of Lost SoulsNext