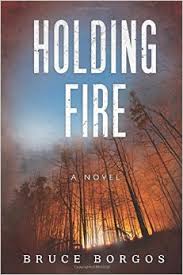 ‘Embattled ranchers versus the federal government’ has been a headline in newspapers for generations, especially in Nevada, where the disagreements have been fierce.  Wayne Hage, the Sagebrush Rebellion, and more recently Cliven Bundy and his sons have loudly disputed the legal rights of the Bureau of Land Management and the National Forest Service to dictate federal grazing allotments and to collect grazing fees. Staunch in their dissent, their recalcitrance has led to armed confrontations and even to violence. Taking the bare-bones outline of such twentieth- and twenty-first-century range wars, Bruce Borgos has crafted an insightful novel about a fictional ranching family and their Nevada hostilities.

Reading Holding Fire, I was most impressed by Borgos’ creativity. While the book’s basic premise mirrors the news, neither the Hale family members nor their individual and collective actions echo familiar patterns. Instead, Borgos imagines a fresh set of characters who behave in unexpected (although inherently logical) ways. Yes, Harlan Hale is an old-school patriarch who accepts an armed militia of enthusiasts as necessary to keep his differences with the Feds newsworthy.  But he is essentially a decent man who eschews violence of any kind.

His sons are decent, too. The elder, John Henry, who lives in Reno and who is a professional firefighter, takes vacation time to return to the family ranch. His goal is to try and talk his father out of any armed foolishness. The younger, Delbert, an adult with the mind of a child, worships his father and his brother and will do anything to keep them safe.  On the other side is Will Bearfoot, a Shoshone who grew up in the area and who now works for the BLM.  When the local land manager is killed by a mysterious house fire, the Feds send Will to talk some sense into the antagonists.

Of course, the federal officials are not cognizant of a long-standing history between Will and the Hale family. Will, in fact, hasn’t been back in the Midas Valley (a fictional locale somewhere north of an imaginary Elko-look-alike named Ruby City) for nearly twenty years. He hasn’t kept in touch with any of his boyhood friends, either. So Will doesn’t know that his onetime best friend, John Henry, is now married to Will’s high school sweetheart, the girl he left behind for reasons the reader learns only as Holding Fire progresses.

It would have been easy for Borgos to turn such potential animosity into uncontrollable volatility, but he manages to contain the situation. He crafts a collection of grown-ups who want solutions to their differences. Even when matters out of their control dictate their moves, Borgos’ characters behave in reasonable ways. The uncontrollable outside factors also show off Borgos’ originality. Not once does he steal his ideas from the headlines. Rather, he imagines a new set of parameters enacted by innovative behaviors. To describe the action in detail would give away too much of this very well-written novel, but I can say that I was happily surprised on page after page.The imagined moves and countermoves made logical sense and kept me guessing. No trite denouements for Bruce Borgos’ narrative lines.

So I am pleased to recommend Holding Fire to “Bookin’ with Sunny” readers. Even though we rarely review e-books, this one deserves applause. I’m pleased to note the upswing in Nevada writing, too. A number of very fine books written by Nevada authors have been published in the past year (many of them reviewed by me on this web-site). All of them are worth reading, not only by Nevadans but by other readers who enjoy intelligent and thoughtful fiction and nonfiction about the American West. Bruce Borgos’ Holding Fire ranks with the best.   –  Ann Ronald

Holding Fire is Bruce Borgos’s debut novel and is available in both e-book and paper. 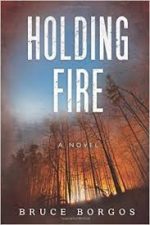 Ann Ronald is a retired English professor from the University of Nevada, Reno. Author of dozens of reviews, she’s also written a number of books about the American West. They include literary studies such as The New West of Edward Abby and Reader of the Purple Sage, cultural studies such as GhostWest and Oh, Give Me a Home, and nature writing such as Earthtones: A Nevada Album. Her latest is a work of fiction, Friendly Fallout 1953. Since retiring, she’s been reading vociferously, so “Bookin’ With Sunny” is giving her a wonderful opportunity to share thoughts about her favorite new discoveries.
More from this reviewer
PrevThe Fifth Petal – Witchcraft Revisited
girlchildNext