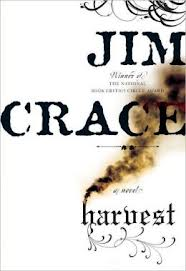 Award winning English novelist Jim Crace has written in Harvest a novel whose story is eerily familiar, although it takes place in a faraway English village long ago. The villagers, farmers who plow and reap for themselves and the lord of the manor house, whose land they till as if their own, live a simple life with clarity of purpose, unchanged for generations until one eventful evening before the feast of the barley harvest.

Lord Kent is recently widowed and the once robust village is losing its young people and its vigor. The foreboding sense of change comes not just from the distant, dense hearth smoke of a newly settling family or the nearby smoke from the burning of Lord Kent’s stable, but in the presence of a stranger who wanders through the village and its farmlands, “brushes and quills” in hand, “recording us, he said, or more exactly marking down our land, at Master Kent’s request.”

The stranger is given the name Mr. Quill and as he plots and maps out every bog, burrow and field, the reader senses the limitation and comfort such boundaries might give to its inhabitants. Crace has created a most attractive narrator in Walter Thirsk, a widower whose relationship with Lord Kent is more personal than that of any other villager and who is, therefore, able to tell the story with some evenhandedness. It is Thirsk, while accompanying Mr. Quill at his task, who tells us what Quill is taking note of: “From the lane, looking down on the tracery of the willows on the brook, the top end of our barley meadow, bristling and shivering on the breeze, showed us at last its ochers and its cadmiums, its ambers and its chromes. They promised winter ales and porridges.”

What is Lord Kent up to? Why are the newcomers whose smoke announces their residency so quickly blamed for the burning of the stable? The morning after the stable fire is put out, “The air was swarming with anxieties.” Accusations lead to death, the villagers take a path from which they cannot return and visits from the outside world continue; the changes are as feared and unpredictable as weather. In this case, the weather is economics. Sheep will replace barley. A legal glitch will replace Lord Kent. The future will always replace the present.

Within this small medieval village exist all the pettiness and villainy of any community in any era. The scent of change does not bring out the best in the peasant farmers and before the story is over, there is misplaced justice for the fire that results in murder, old animosities flare up, lovers are separated, witches hunted, and distrust and suspicion become bountiful.

Crace has written an idyllic setting with an intimacy that is all the more wrenching when Thirsk understands “The place would soon be new,” and “replaced with an upstart thorn or with some plain fence beyond which flocks will chomp back on the past until there is no trace of it.” Thirsk, more pragmatic than assured, leaves us with these words: “This is my heavy labor now. I have to leave behind these common fields. I have to take this first step out of bounds………………until I reach wherever is awaiting me, until I gain wherever is awaiting us. Harvest is both a rich novel of the past and a haunting directive for today.   – Sunny Solomon

Sunny Solomon holds an MA in English/Creative Writing, San Francisco State University. She is a book reviewer for “The Clayton Pioneer” and her poetry and other writing has been published in literary journals, one chapbook, In the Company of Hope and the collection, Six Poets Sixty-six Poems. She was the happy manager of Bonanza Books, Clayton, CA and Clayton Books, Clayton, CA. She continues to moderate a thriving book club that survived the closure of the store from which it began. Sunny currently lives next to the Truckee in Reno, NV.
More from this reviewer
PrevUnsaid
The War that Ended PeaceNext