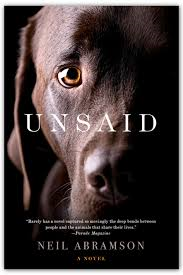 UNSAID, THE COMMUNICATION OF GRIEF

Most of the time, I recognize the intended audience for any particular novel. It is obvious which readers will enjoy which book, and it is easy to write an appropriate review. However, I am on less certain ground when thinking about Neil Abramson’s Unsaid. Its dynamics are twofold—what tacit communication occurs between animals and their humans, and what is left unspoken and unsaid when a loved one (either human or nonhuman companion) dies. Unsaid is definitely a book to be read by animal lovers, but I fear it would break the heart of anyone in the early stages of loss and grief. Four of my friends had to put their aging dogs to sleep this past year, and I listened to each of the four agonize about the decision. I can’t imagine any of them reading Unsaid right now; maybe in a year or two, but not right now. Or am I wrong? Would this amazingly sensitive novel bring solace and comfort? I leave that decision up to each individual reading this review. I can’t predict how you might respond to a novel that, over and over again, will bring tears to your eyes.

On the first page, the reader learns that the narrator is no longer alive. A veterinarian who has been felled by breast cancer, Helene is outside looking in, watching her beloved husband, her closest friends, and a menagerie of animals attempt to cope with their loss. For the first few chapters, I wasn’t sure this premise was working, but before long I was totally caught up in the narrative experience. In truth, the heart of the book centers on those left behind, especially David, the narrator’s husband. The narrator is simply a conduit, a voice through which the reader tracks the emotional growth of the living characters.

As the novel progresses, David slowly learns how to function in a world without his wife, a domestic world effectively held together by Helene’s professional skills, her sensitivity, and her personal insights. At the same time, he learns new secrets about the wife he thought he knew so well. The plot widens in scope as David learns more and more about Helene’s involvement in the language development of a chimpanzee. With the use of computers, this chimp’s abilities have moved far beyond earlier sign language successes. How those communication skills fold into the unsaid and the unspoken is part of the novel’s complexity. By the end of Unsaid, the reader’s heart remains broken but the reader’s mind has been stretched enormously.

I was particularly moved by one of the secondary characters, a twelve-year-old boy with Asperger’s syndrome. Clifford’s emotional range is limited, although he is very bright and is a gifted young artist. Despite his inability to communicate directly, Clifford picks up on animals’ non-verbal cues in surprising ways. He also interacts with Helene’s (now David’s) cats, dogs, and horses in ways David can’t possibly match. Clifford’s role in Unsaid is relatively minor, but he echoes the complex communication issues that Abramson is exploring.

Unsaid came to me in my Christmas stocking. I opened its pages, uneasy with its narrative premise and uncertain about the initial stages of grief. Before long, I couldn’t stop reading. Not only are the characters well-drawn, but the thoughtful underlying philosophical inquiry is even more impressive. I recommend Abramson’s novel whole-heartedly; I just don’t know who will like it, who will love it, and who will be unable to handle its emotional impact.  – Ann Ronald

Ann Ronald is a retired English professor from the University of Nevada, Reno. Author of dozens of reviews, she’s also written a number of books about the American West. They include literary studies such as The New West of Edward Abby and Reader of the Purple Sage, cultural studies such as GhostWest and Oh, Give Me a Home, and nature writing such as Earthtones: A Nevada Album. Her latest is a work of fiction, Friendly Fallout 1953. Since retiring, she’s been reading vociferously, so “Bookin’ With Sunny” is giving her a wonderful opportunity to share thoughts about her favorite new discoveries.
More from this reviewer
PrevShameless and Plotting Temporality
HarvestNext