The War that Ended Peace 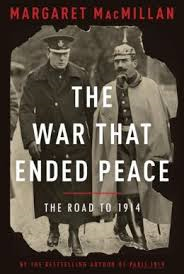 I typically read a book about World War I (the Great War) by beginning at the back with the bibliography. I know this signifies that I am one of “those people,” someone who probably reads the last chapter of a mystery novel about half way through, someone who doesn’t acknowledge what a spoiler alert is. I confess: it’s a guilty pleasure. In this case—books about the origins of World War I—I have a more sinister motive in mind. It proceeds from an observation of mine about those who write books identifying the origins of great events in history, such as the fall of the Roman Empire, the Crusades, the French Revolution, the American Civil War—the list goes on. In any case, my observation is this: those who write about great events write with the assumption (tacit or explicit) that such events necessarily arise from great causes. It also seems true that great events create massive libraries—the collected histories of the American Civil War, for instance, could easily fill the Titanic if it hadn’t already sunk.

So, when I read Margaret MacMillan’s bibliography what did I see? Hundreds of books, memoirs, articles, and document collections written mostly in English and German (little in French or Russian), sources that reflect most of the best published thought on the origins of World War I penned during the last century. Immediately I suspected that this book, The War That Ended Peace, might fall into the “great events have great causes” camp and that she might tilt her analysis in the direction of England, Germany, and possibly Austria-Hungary. I was not disappointed

I was treated to an intelligent, engaging recap of a century’s analysis that has detailed the major trends in late 19th century society, politics, and war. MacMillan connects these trends to the origins of the Great War: the shredding of Bismarck’s carefully crafted balance of power system, the rise of democratic politics and jingoistic nationalism, the industrialization of armies, navies and their armaments, the slow pirouette of England and Russia away from Germany’s embrace and towards each other (and France), the concomitant isolation of Germany and its increasing dependence on Austria-Hungary, the rise of nationalism and ethnic politics throughout Europe, particularly in Ireland and the Balkans, and the mistaken belief and false hope that the century of relative peace in Europe (beginning in 1815) had been so strengthened by economic prosperity and interdependence among nations that a general European war was unthinkable.

This last trend—hoping that the Long Peace had antiquated war—was finally shattered because of tensions within the three autocratic European Empires (Germany, Russia, and Austria-Hungary) tensions that didn’t have to result in war in MacMillan’s view. France and Britain’s roles and responsibilities (the two “liberal” Empires), while considerable, were of a lower order of magnitude than those of the three “ill-liberal” ones. So much for guilt.

One of MacMillan’s strengths in my view is that she doesn’t conclude either that the “war was inevitable” or the “war was accidental,” two popular choices over the intervening decades since 1914. Rather, she discusses numerous instances of the road not taken. She accomplishes this by adroitly constructing the proscenium arch, backdrop, and furnishings for what would be a war on a world stage, but like a good dramatist MacMillan emphasizes the interplay of the cast of characters (too long to list) whom she identifies and discusses individually and in groups with insight and verve. By and large these actors (hardly a woman among the lot) came from the elites of their various nations—some were self-made and from humble origins, but overwhelmingly they came from the entitled one per cent. Many were related by blood; many others knew each other. Despite their various connections, they made choices that ultimately led to war rather than peace. Some actively wanted war; most did not. They generally shared an optimistic view of the world and Europe’s premier place in it. Some quickly saw the limits of their optimism after August 1, 1914. For others it took a bit longer. By 1918, the realization was universal. They had lost their world by not choosing peace over war. We inherited the consequences of their questionable choices.            – Neal Ferguson

Neal Ferguson is a self described Anglo-phile. After studying for a PhD in British history and doing research for a year in various British archives, he came to the University of Nevada in 1970 to teach. Soon he found himself in administration where he remained until 2003. After returning to full-time teaching a decade ago, he decided to concentrate his teaching energies on Medieval British history and various global aspects of World War II. Dedicated to Ambrose Bierce’s proclamation that the purpose of war is to teach Americans geography, Neal insists that his students accompany him (in class) to sundry east European rivers and steppes, African deserts and jungles, south-east Asian mountain ranges and peninsulas, and small islands and coral reefs in the Pacific. Currently he is writing a book about the ups and downs of General Douglas MacArthur’s military reputation.
More from this reviewer
PrevHarvest
The ThiefNext