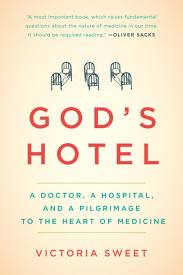 God’s Hotel  A Doctor, a Hospital, and a Pilgrimage to the Heart of Medicine

During a conversation about health care being more businesslike than “care-like,” a friend recommended I read God’s Hotel. I will be forever grateful for that recommendation, and the book.  I discovered, at surface level, a captivating and charming memoir:  underneath, a revealing depiction of modern medicine, the politics of managed health care, the treatment (or not!) of those who cannot afford medical care, and how the “new” is not necessarily better than the “old.”  Such depressing subjects, but it is not a depressing book, far from it. Dr. Sweet is a great storyteller, and the doctor we all wish we had.

Sweet begins her account with how she chose to become a doctor and her reasons for going to Laguna Honda Hospital in San Francisco. “Laguna Honda was an almshouse, . . . or, as the French call it, an Hôtel-Dieu – God’s Hotel – a kind of hospital from the middle ages that evolved as a way of taking care of those who couldn’t take care of themselves . . .Laguna Honda . . .  was probably the last almshouse in America.”

The administration at Laguna Honda allowed Sweet to practice part-time while she pursued a doctorate in the History of Medicine. She planned on staying two months. Those two months became more than two decades. She uses her patients’ stories to explain not only their recoveries, but her personal growth and change as doctor and healer (as she comes to find, the two are not always the same), as well as to illustrate her theory of Slow Medicine. “Slow Medicine is just taking the time: to talk to and examine and even re-examine a patient; to call other doctors; to go over lab tests and X-rays; to think about and muse over a diagnosis; to discontinue medications that are, perhaps, no longer needed; to try a new medication—but carefully.” Sounds too simple to be true, but Sweet presents many justifying examples and stories.

From her studies of Hildegard of Bingen, the twelfth century mystic, nun and medical practitioner, Sweet discovered some of what she felt was missing from modern medicine and learned much that became part of her method of caring for her patients at Laguna Honda. The author made a pilgrimage to Santiago de Compostela in Spain. That experience of “pilgriming” taught her “a contentment of mind” and a more insightful understanding of her Laguna Honda patients: “my relationships with my patients began to deepen. When you think about it, doctoring has everything to do with not accepting things as they are, and while I didn’t stop doctoring my patients, there was some new way in which I was appreciating them just for who they were.”

God’s Hotel finishes with: “So in the end, if it was the end, and whatever happened in the future, I had to agree with what Dr. Curtis told me on my very first week – God’s Hotel was a gift.” Dr Sweet gives us, the reader, a gift too, an amazing gift of hope and inspiration for modern medicine.   – Vivienne French

Victoria Sweet is an Associate Clinical Professor of Medicine at the University of California, San Francisco. She has been awarded a Guggenheim Fellowship for the 2014-2015 year, and is working on her next book, tentatively titled, “Slow Medicine, Fast Medicine: Healing in an Age of Technology.” 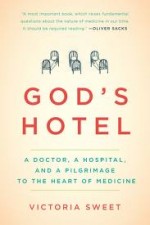 Vivienne French was born in New Zealand and grew up a voracious reader, much to the thanks of her “Mum” and fourth grade teacher, Mr. Sanders. Her short stories and articles have been published in women's magazines, specialty magazines and her hometown newspaper. She has been a resident of Reno, Nevada for twenty-nine years and has worked professionally for a number of nonprofit service organizations. She currently teaches grants writing at Truckee Meadows Community College and serves on the board of the Friends of Washoe County Library. She looks forward to getting back her favorite pastime, reading for the love of reading.
More from this reviewer
PrevJapan 1941
Black KarmaNext